Footwear imports grew by 4.7% to a record $25 billion in 2014, the third straight year of mid-single-digit growth in the sector, with shipments from Vietnam representing a larger part of the U.S. market. China continued to lose its footing, and Italy stepped up exports to the U.S. luxury market. 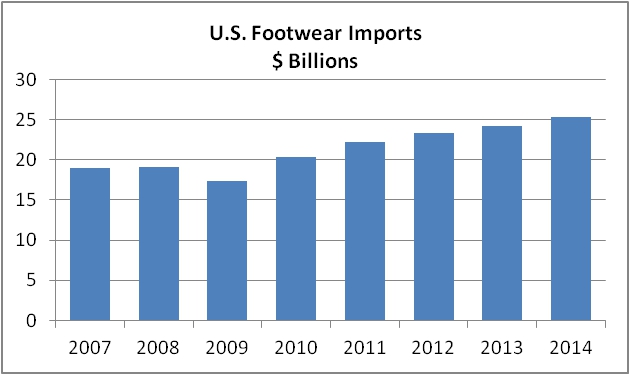 According to the most recent U.S. government data, footwear import growth was almost double the increase of apparel imports, which grew by only 2.5% on a dollar basis during the year. Footwear units were up negligibly. The average cost for a pair of imported footwear increased by 4.4% for the year, to $10.85.

Cost increases were due to increased labor rate hikes, a relatively strong U.S. footwear market, particularly in casual and athletic/athleisure shoes, and a strong high-end market. An estimated 98 percent of footwear sold in the U.S. is imported, according to the American Apparel and Footwear Association.

Despite losing 2.9 percentage points of market share last year, China remains by far the dominant supplier to the U.S. footwear market, with an almost 66 percent share of total dollar imports. Imports from China edged up by .3% between 2013 and 2014, to $16.7 billion. The average cost per pair of footwear imported from China in 2014 increased by 3.1% to $9.06, 16 percent below the overall average. Approximately 43 percent of the footwear from China was made of leather in 2014, down slightly from 2013. 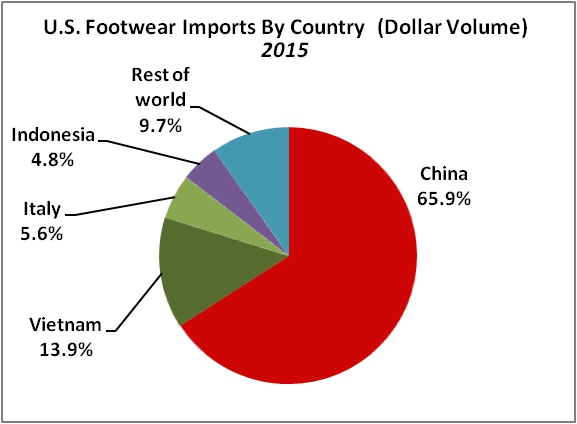 Vietnam gained 2 percentage points of market share in the year, bringing its share of U.S. footwear to 13.9%, a new record. Imports from Vietnam surged by almost 23 percent in the year, to over $3.5 billion. Unit imports grew by 18.9%, driving up the average pair cost by more than 3 percent year-over-year. Leather footwear comprised 46 percent of footwear from Vietnam in 2014, down from 47 percent in 2013.

Italy supplies the most expensive footwear to the U.S., at an average cost of over $86 per pair, up 7.7% percent over 2013. In 2014, the U.S. imported $1.4 billion worth of footwear from Italy, an 8.3% increase over 2013. Virtually all of the footwear imported from Italy was made of leather last year. Italy is now the third largest supplier in dollar terms to the U.S. footwear market, with a 5.6% share, underscoring the continued importance of the luxury business. 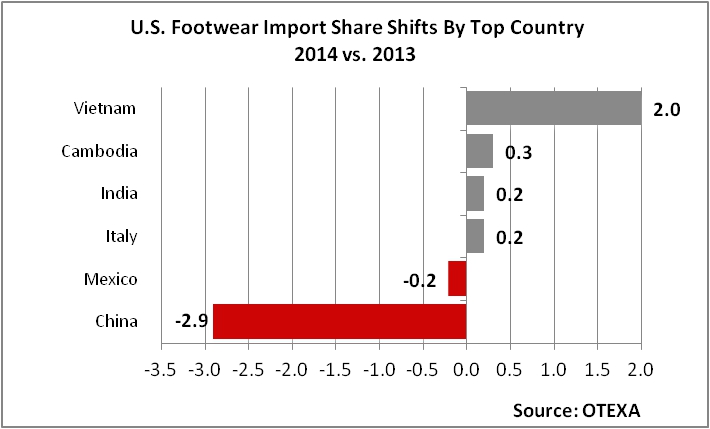 Both India and Spain enjoyed double-digit growth in shipments to the U.S. last year. Footwear imports from Cambodia more than doubled in 2014 to $124 million, allowing it to unseat Thailand as a top ten supplier to the U.S. 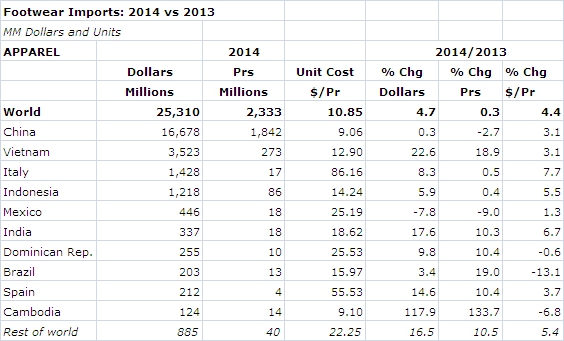