We’ve hit peak sneaker. Proving to be more than just a passing trend, the demand for athletic shoes has been one of this year’s most defining footwear stories.

Lines for sneaker releases stretching around street corners are now a regular sight on New York City sidewalks. “Athleisure,” officially a real word, is being contemplated as office wear. And then there’s Kanye, who has pushed beyond hype and is being tapped by Adidas to help the German company achieve its grand ambitions of an NBA takeover.

According to data from market research company NPD, sales of sneakers in the U.S. now top $28 billion. While most of that sum comes from sales of sneakers which are widely available on the market, limited-edition sneakers, which represent only a small payday for most major footwear companies, drive a resale market that StockX, the “stock market of things” for sneakers, now estimates to be worth more than $1 billion.

As sales of sneakers continue to skyrocket due to larger cultural trends towards athletic attire and footwear, the sneaker resale market through which rare and limited-edition sneakers are sold has become a legitimate business in its own right.

To be sure, devoted sneakerheads have been buying and selling for years, but what was once seen as a rather niche hobby for the select few who could afford to hunt down rare and expensive sneakers has become more accessible than ever.

While part of this is brands simply becoming savvier—tapping into the demands of sneaker fans with continuous new drops—the rise of buying and selling shoes online has taken the market from consignments shops and street corners to every corner of the globe.

As mobile quickly ascends to become the primary way in which we purchase things—by 2020, online payments via mobile will nearly equal those made from a PC or laptop—sneaker deals are increasingly being made from tiny handheld screens.

This makes the apps through which buyers and sellers bid for and auction product particularly important. While more traditional online marketplaces like eBay still dominate the sneaker resale market, a new generation of startups is challenging the way business is done.

Goat is one such app that is legitimizing sneaker transactions online. Dissatisfied with a pair of Jordans he bought off eBay, Goat co-founder Daishin Sugano launched his own sneaker marketplace in 2015, which serves as a middleman between sellers and buyers, authenticating real shoes from fakes.

“It all began when Daishin purchased a pair of Air Jordan 5 Grapes on eBay,” said Sen Sugano, Goat head of marketing and communications. “He had the original pairs as a kid and was eager to get the retros again some 20 years later. The issue was they ended up being replicas.” 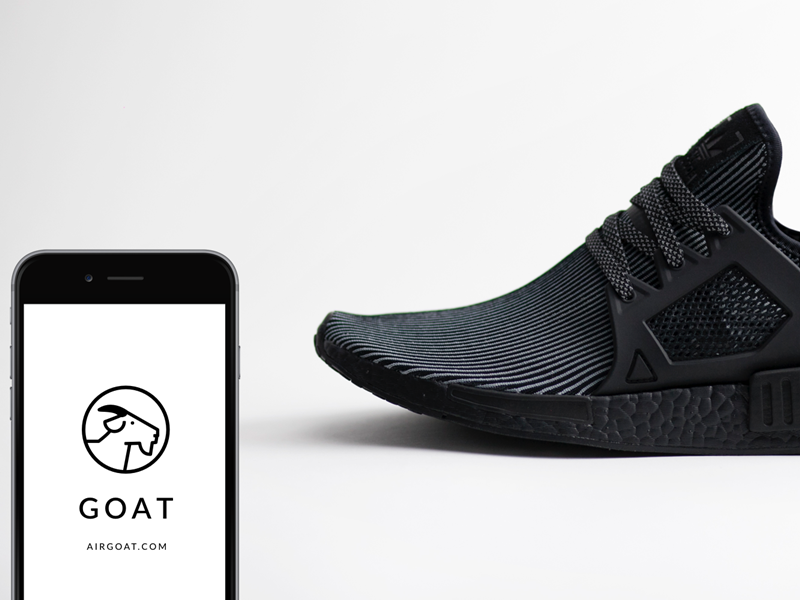 “After going back and forth with the seller for weeks, he eventually decided the effort to get his money back wasn’t worth the stress and time,” he continued. “We built Goat to solve this exact issue and to make the sneaker resale market both safe and hassle-free.”

Where eBay and Instagram (where a lot of shoe selling also goes down) function as a sort of digital wild west, and where more traditional consignment shops like NYC’s Flight Club offer their authentication services at a premium, Goat verifies every sneaker sold regardless of price, and takes a smaller cut of sales (9.5% compared to the 13 percent taken by eBay via Paypal, or the 20 percent commission charged by Flight Club).

So far, the model has proven a success. Since launching Goat’s iOS and Android apps in July 2015, over half a million members have joined the service. The company says it has maintained average month-over-month revenue growth of 40 percent, with the majority of order values in excess of $300.

“We vet all sellers and require them to ship their sneakers to our warehouse once they sell, so they can be verified authentic and as described by trained specialists,” said Sugano. “If the sneakers are found to be replicas or not as described, we offer a full refund to the buyer. With this business model, the seller gets to keep their sneakers until they sell and we don’t have to take on the risk of holding any inventory.”

But Goat isn’t totally upending traditional brick-and-mortar either. Earlier this year the company signed a deal with NYC-based consignment shop Stadium Goods, which now sells its vast collection of rare sneakers through the company’s app.

Goat also recently received $5 million in funding led by Matrix Partners, which the company says it will use to help expand its US and international operations. Going forward, Sugano says he sees the company branching out beyond sneakers.

“We see Goat as the future of the sneaker resale market and possibly beyond to other collectibles,” he said. “Our value is our service, where we verify all sneakers to ensure they are authentic and as described. We’ve experienced tremendous success with this business model, so it makes sense to expand to other rare products and collectibles, where replicas are prevalent.”

Sugano says he expects further innovations in the mobile retail space to open up new doors for businesses like Goat to better compete with retailers, including improved shipping options. He cites Amazon as a prime example.

“Amazon is a great example. They’re constantly optimizing their shipping and logistics to get their products to their customers quicker,” he explained. “With the proliferation of concierge-type apps, such as Uber and Postmates, we’re expecting consumers to have even more options for shipping. Consumers are already able to order from some apps and have their orders delivered to their door or wherever they are within an hour or less. We hope to offer this for sneakers in the very near future as well.”

For sneaker fans, part of what makes buying and selling such an addicting hobby is the thrill of the hunt, and so apps like Goat capitalize on this social aspect through features like “OnFeet,” where users can take photos of themselves wearing their sneakers.

In this way, the sneaker resale market is much the same as it’s always been. Technology may advance, but making a deal still ultimately comes down to forging a human connection.

“Community is very important,” says Sugano. “Sneakerheads have a term they use when they help one another out. It’s called ‘fam.’ In the sneaker industry, it’s the act of actually getting the sneakers that makes it fun.”