Living in 2020, it’s hard to imagine a time when streetwear didn’t reign supreme (pun intended) over the fashion landscape. Sneakers, T-shirts, hoodies and matching sweat sets have become the uniforms of a generation.

But in 2006, when Jeff Malabanan and partner Ed Mateo opened their first store together in downtown Los Angeles, dubbed RIF LA, the scene was small, tight-knit and mostly underground.

The sneakerheads, once strangers, kept running into each other while shopping around town. Eventually, Malabanan introduced himself to his now partner while in the checkout line at a Supreme store.

The next few years were tough, Malabanan told Sourcing Journal. The Great Recession of 2008 created a bleak backdrop for the launch of a new business. RIF LA struggled through its first two years selling new Nike and Adidas sneakers, but they were generating so little in sales that a long-term future seemed unlikely.

“We were doing literally $0 a day sometimes,” Malabanan said. “We couldn’t afford any employees.”

In order to save his floundering business, Malabanan shifted strategies quickly. “We knew we needed to start changing and adding new ways to make money,” he said. “So we started selling used shoes.”

The store’s new consignment model attracted L.A.’s most ardent sneaker aficionados, giving the co-owners access to the rarest of rare models. Within months, RIF LA began doing up to $100,000 a month in sales, and its reputation as a destination for in-the-know collectors grew exponentially.

Malabanan also began flying to Japan to pull wares for the store, especially Supreme clothing. “I started buying as much as possible, and that’s how we opened the clothing side of our consignment,” he said.

By 2010 the brand had hit its stride, and RIF LA was doing $6 million a year in revenue. The partners went on to open stores in San Francisco, California’s Orange County and the Philippines in quick succession.

The rise of the franchise coincided with the launch of some of the biggest careers in music and sports. Malabanan recalled a time when Grammy-award-winning rapper Kendrick Lamar, on the verge of breakout stardom, agreed to wear the co-founder’s home screen-printed RIF LA T-shirt in his music videos in exchange for free sneakers.

“A lot of people who met us during our lowest lows were in the same boat,” Malabanan said. “They were trying to figure out what they were going to do, too.”

“It’s about helping each other out,” Malabanan said. “Imagine if I had ignored them? When I met some of these kids, they didn’t have a dollar in their pocket.”

Fast forward to 2020, and a global pandemic has forced the franchise to shutter its doors across the globe for the past three months. And last week, RIF LA and its sister store, RIF SF, were looted during the riots that broke out during nationwide protests of police brutality and social injustice.

“Friday night, we were one of the first stores to get hit in L.A.,” Malabanan said. At 2 a.m., amid news that riots had broken out near the store, he and Mateo rushed to the location to intervene. “When we got there, people were still coming in and out of the store stealing shoes,” he said.

The partners attempted to defend their property, driving off the looters. “No one really tried to attack us,” Malabanan said. “Once we made it clear that we owned the store, they moved on.”

But not before stealing most everything from the shelves, he said, and inflicting damage on whatever was left over.

“It all happened so fast that we didn’t even think about San Francisco,” Malabanan said. The RIF SF store had already been closed down and boarded up in light of the COVID-19 store shutdowns, he said, and while the owners spent the weekend surveying the damage to their L.A. store, nearly 400 miles away, their Bay Area brick and mortar was being torn apart.

“S.F. got hit for upwards of $300,000 on Saturday night,” Malabanan said. “They had hours to loot, and they picked it apart and emptied it out.” 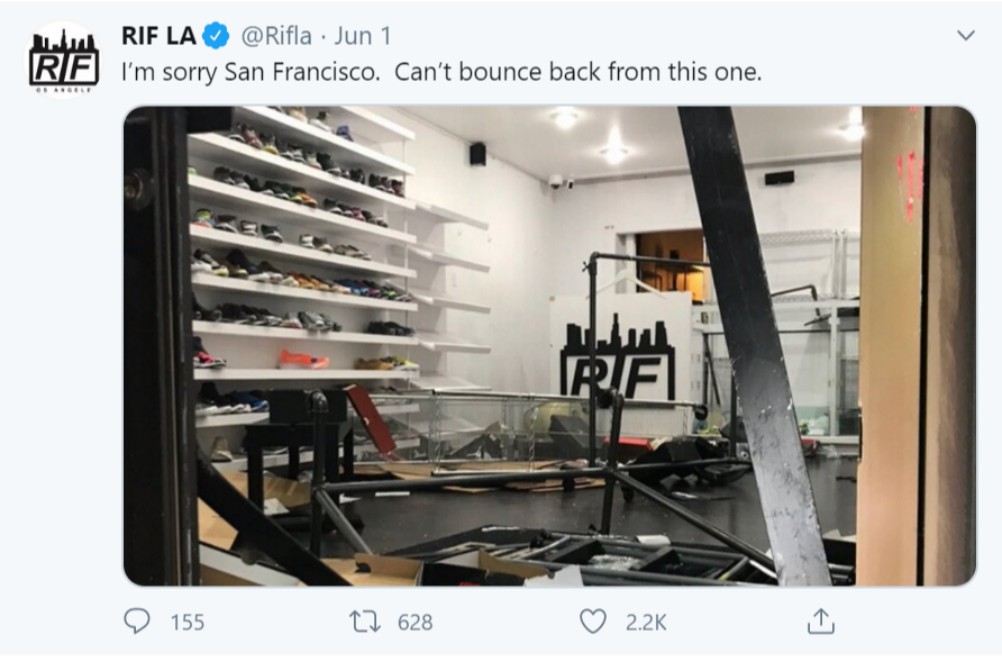 In the emotional aftermath of the event, Malabanan tweeted a now widely circulated missive that devastated the Bay Area’s sneaker lovers. “I’m sorry San Francisco,” he wrote. “Can’t bounce back from this one.”

While Malabanan was adamant that he and Mateo would not open up again in the same location, he admitted that he hopes they can find a way to maintain a San Francisco business in some capacity.

RIF will also have to strengthen its online presence, he said, and the company is currently building an app to make it easier for the store’s patrons to shop from home.

But for now, the franchise will have to take stock of what it has lost and contend with paying back consignors.

Some have trusted the company with their precious shoe collections and top resellers have brought the brand $40,000 in merchandise, Malabanan said. “Anything that is lost or stolen, we have to pay for.”

While he has heard rumblings that aid might become available through government programs for businesses that suffered losses during the riots, Malabanan said he’s not holding his breath. A long-awaited PPP loan enabled the business to bring back just one of its 25 employees across store locations, he said, dampening his hopes for government intervention this time around.

He’s also hesitant to accept money from potential donation campaigns proposed by fans and customers. “We had a ton of people offer to start GoFundMes for us, but I don’t know if I feel right taking that money,” he said. “I am not sure if we will accept it, but we’ll see.”

For now, RIF will have to take out a loan to pay back its consignors. “If we want to move forward, we have to pay every single person who lost their shoes through us,” said Malabanan, who hasn’t been upstate yet to calculate the damage—a task he dreads.

Despite the devastating effects of the events of the past week, Malabanan is far from bitter. “It’s unfortunate what happened to our stores,” he said. “But I was never really mad or wanting vengeance—there are obviously issues going on that are bigger than us.”

RIF has built its business with the unrivaled patronage of black shoppers and public figures, he said. “The whole black community has been going through so much.”

Even amid the heightened tensions and despair of recent days, Malabanan has received calls and outreach from big-name supporters. “Everyone has reached out” to check in on him and the business, he said, from NBA players to musicians.

For now, Malabanan is putting one Nike-clad foot ahead of the other, and attempting to move forward. The lessons of the past could prove prescient as he and Mateo work to rebuild their budding empire.

“We’ve been through the first recession and that was scary,” he said. “If we hadn’t been through that, though, I don’t think we would have made it to 14 years of business.”

Malabanan is looking forward to getting back behind the counter—a role he relinquished in recent years as he worked to expand RIF’s footprint.

“Over the next couple of months if you come into our store, you’ll probably see me there selling shoes,” he said. “It feels like 2008 again—just me and my partner, trying to figure out what to do next.”