A financial analyst is predicting the Covid-induced halt in Vietnamese manufacturing could cost Nike 160 million pairs of shoes this year.

The increased risk of “significant cancellations beginning this holiday and running through at least next spring” led Camilo Lyon of the investment firm BTIG to send a note to clients downgrading Nike from “Buy” to “Neutral.” The company’s stock ended the day down nearly 2.5 percent.

With two months of “virtually no unit production” at Nike’s factory partners in Vietnam, the analyst estimated the company has lost 40 million pairs a month, or 80 million pairs total. Looking to the remainder of the year, Lyon predicted it will see another four months or so of 50 percent production capacity.

According to a report published by the Vietnam Leather, Footwear and Handbag Association (Lefaso) at the end of August, 80 percent of leather and footwear manufacturers in Ho Chi Minh City and the southern provinces of Dong Nai, Binh Duong, An Giang and Kien Giang had ceased production due to social distancing and labor shortage. Enterprises in the central and northern provinces were reportedly operating at 50 percent to 70 percent capacity.

Vietnam accounted for more than half, 51 percent, of Nike’s footwear unit production last year. Per BTIG’s discussions with its in-country contacts, that number was “going to go a lot higher this year,” Lyon said in an interview with Yahoo! Finance.

“That is, until Covid-related shutdowns mandated by the government began about two months ago,” he added.

Despite the company’s size and power, Lyon said he didn’t see any feasible way for Nike to pivot its manufacturing capabilities elsewhere to make up for the losses any time soon—including up to spring next year.

“Look, Nike is the best company in the world, it’s also one of the largest,” Lyon told Yahoo! Finance. “So, when we talk about them shifting their production, we’re talking about a battleship turning… On footwear, the complexities mount even more so relative to apparel… If you think about how many hands, how many pairs of hands, go into making a pair of shoes, it can be north of 30 people touching one pair of shoes, where for apparel, maybe like three or four people.”

Given this environment, Lyon said BTIG cannot see any way for Nike to hit the low-double digit revenue growth it forecasted back in June. Even if the company were to shift the supply that otherwise would go to wholesalers to its direct channels—“a pretty cataclysmic shift against the wholesale partners in their favor”—it would not be enough to get it back on track. Based on BTIG’s supply chain checks, Lyon said the firm is estimating revenue could come in flat to low single digits in fiscal 2022, a period that began June 1.

“We’re at a loss for ways of finding how Nike can quickly resolve this issue today,” Lyon told Yahoo! Finance. 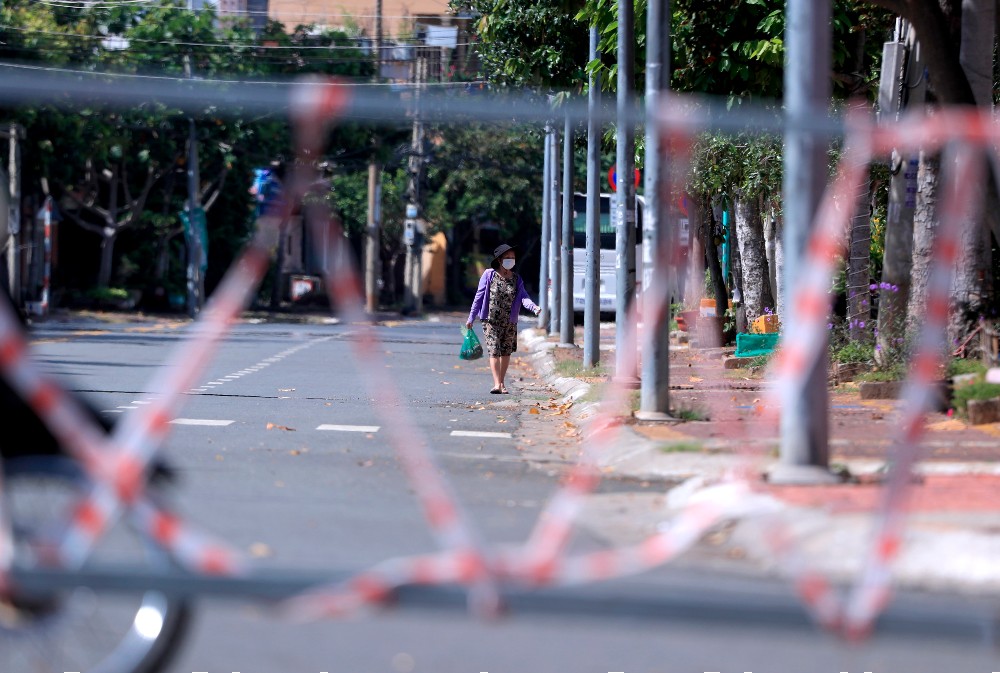 BTIG’s note came as state media announced Monday that Ho Chi Minh City would extend its restrictions—previously set to expire Wednesday—once again, this time until the end of the month. A program that would have allowed vaccinated individuals more mobility was also delayed.

According to Johns Hopkins University of Medicine, Vietnam has recorded 613,375 confirmed coronavirus cases and 15,279 deaths since the pandemic began. Of that total, 357,627 cases and 10,191 deaths were recorded in the past month.

So far, the country has administered more than 28 million vaccine doses. Just over 5 million individuals, or 5.24 percent of the population, are fully vaccinated. According to state media, 7.8 million of Ho Chi Minh City’s 9 million residents had received their first dose and 1.3 million had gotten their second. The Southeast Asian country has approved seven vaccines for emergency use, including the United Arab Emirates’ Hayat-Vax vaccine on Friday.

Whether or not Vietnam is able to eventually vaccinate its way out of the ongoing outbreak, many businesses besides Nike are facing a tough time today due to the country’s attempts to tamp down infections. Last month, Adidas estimated that new Covid-19 lockdowns in Asia, combined with tensions with China, could cost it more than $592 million in lost sales in the second half of the year. A couple weeks ago, Chico’s revealed it had moved 9 percent of its overall production out of Vietnam and into other countries. Last week, Lululemon said pandemic-related closures in the nation had impacted 20 percent of its second-half inventory.