The fashion trends on display at the Feb. 2-6 edition of GDS in Düsseldorf, Germany were as diverse and swoon-worthy as the worldwide fashion weeks that followed. With a positive mood, lively networking atmosphere and more than 92 percent of visitors stating that they were “very pleased” with GDS, show director Kirstin Deutelmoser said attendee feedback reconfirmed that the show’s updated format makes it a valuable information platform for brands to present themselves on an international stage.

Drawing that spotlight was a crop of footwear trends spanning scholarly oxfords to fantastical metallic heels from some of the show’s 900 exhibiting brands. Here’s a look at the most notable looks Europe has to offer for Fall ’15.

BLOCK BUSTERS
The remnants of last year’s Mod Squad-inspired demand for black and white footwear is taking a bold step toward to the ’70s with mega-sized block heels, platforms and lug soles. Still, the look is crisp and sharp with graphic lines and smooth box leathers. Hearty kilties, lend a scholarly flair; zippers and buckles are toned down. Clarks gets into the action with pointed toe pumps that are business in the front and party in the back with protruding block heels. 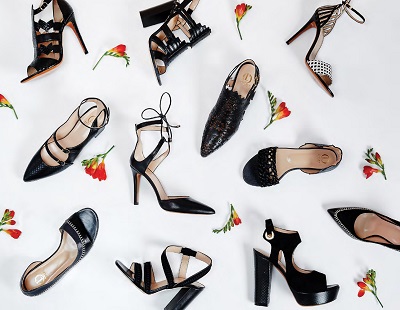 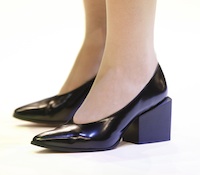 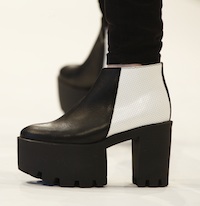 ROMAN TIMES
Designers are going against conventional wisdom with wide-open gladiator sandals for fall, including styles that snake of up the leg with whisper thin laces. But the most brazen sandals are outfitted with thick black leather bands, highbrow gilded plates and in some cases, slivers of snake. Zippers add a sporty and functional element to the twisted look, while designers like Alain Tondowski throw out the whole strappy sandal concept out the Coliseum’s window, reinventing the gladiator as a stretch peep-toe boot. 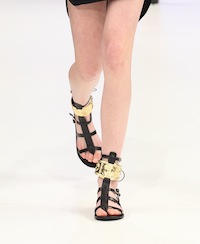 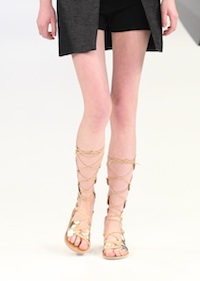 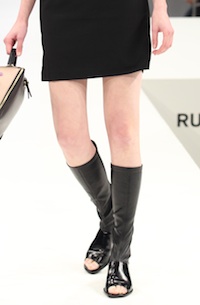 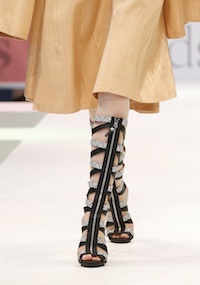 TAILORED MADE
Say goodbye to shoe laces. The newest iterations of women’s man-tailored footwear zeros in on traditional monk strap silhouettes and sleek slip-on oxfords. That no-fuss approach to tailored footwear is an open invitation for more material interest, including old-world brogue details, zesty color-blocking and textural leathers like ostrich. For a more modern approach, brands like Clarks are creating a new profile with side cutouts. 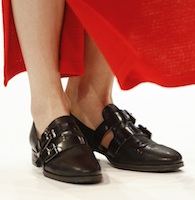 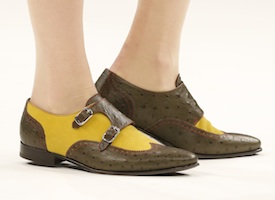 MERMAID INN
A fall season wouldn’t be complete without a treasure trove of jewel tones bedecking women’s footwear, but this year’s hues are taking to the ocean with embellishments and shine that would even make mermaids reconsider life under the sea. Teal and purple suede are go-to materials for boots. On dress shoes, expect to see iridescent splashes of fish scale metallic purple, blue and green. Prospekt takes the seaside look a step further with pumps decorated with three-dimensional details inspired by sea urchins.