Trade shows traditionally connect buyers and sellers, but not all businesses need that, according to Jeff Wolf, co-founder of The Outpost, a new community-oriented trade event designed to foster real relationships with key buyers, distributors and influencers.

The simple way to describe The Outpost is a weekend of food, performances and activities for buyers, media, brand reps and influencers to meet like-minded people from various industries. However, the two-day outdoor industry event, founded by Wolfe and Caleb Morairty in 2016, quickly manifests into an adventure chock-full of organic opportunities for brands to introduce their products. Attendees stay in tents provided by a tent company, dine el fresco and sip drinks provided by a liquor company and sign up for a roster of brand-sponsored activities, from kayaking and yoga, to mixology and cast-iron cooking.

By combining the nostalgia of summer camp with a festival-like atmosphere—complete with live bands and DJs—Wolfe, who previous worked for an experimental marketing agency and Morairty, who worked for Capitol Records, aim to shed the bad connotations associated with trade events. “The general consensus is that trade shows are god awful experiences that suck the life out of everyone that is participating in one,” Wolf said. “Long days, no meaningful culture and it doesn’t seem like a proper way of doing business. So, we refer to ourselves as the anti-tradeshow.”

The concept for The Outpost came to fruition after Wolfe’s friend, who managed marketing for a mid-size business, felt overwhelmed organizing photo shoots, trade shows and product seeding with limited time and budget. “We talked about how it would be nice if there was a community-oriented platform to capture these things in one swoop,” Wolfe recalled, adding, “Brands need different tools and need a place to tell their story and articulate their culture, which is really what The Outpost is doing. It’s about creating a platform for brands to show what they stand for. Less about product, more about culture.” 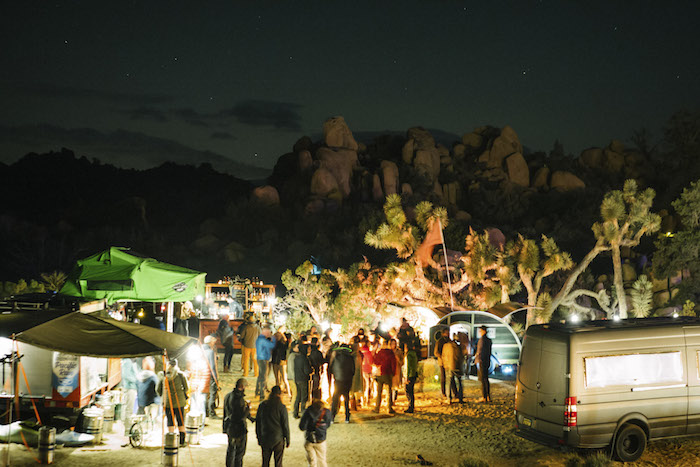 Furthermore, The Outpost is positioned to capture products being used in the field, providing brands with invaluable content, including shareable videos and photographs to woo experience-obsessed Millennial consumers. “Today’s consumer is so aware, there’s nothing you can hide. They are connected to brands through social media, so you need to be constantly articulating what you stand for,” Wolfe said.

The Outpost held its first trade event in October 2016 in Bodega Bay, Cali. “Our first Outpost was very much a proof of concept event,” Wolfe said. “People were surfing for the first time, doing yoga on a mountain… at the end of that weekend we were sitting there like, ‘What did we just do? We just stared another business.’” That event was followed by a second regional event in Joshua Tree, Calif. and a third this June in New York’s Catskills.

Brands can get involved on many levels. “Some will come for a networking experience; other brands will come to us and ask for something impactful to premier a new campaign or launch a new product, to create an experience in our own eco system,” Wolfe said. “We know our audience and what will resonate. Brands can turn to us. We go back and forth on ideas to see how we can activate.”

Teva was an early adopter of The Outpost. Wolfe calls the Deckers-owned brand, which has invested in similar consumer-oriented activations at music festivals, the “fun guy” in the room. In Joshua Tree, Teva sponsored a botanist-led hike through the desert that ended at a surprise pop-up bar with a celebrity mixologist. The hikers—dressed in Teva footwear—were taught how to make craft cocktails with the plant life they collected along the way.

“We photographed that whole experience and had a cinematographer on hand,” Wolfe said. “Teva walked away with a cool experience and media of their new products being worn in the right environment.” 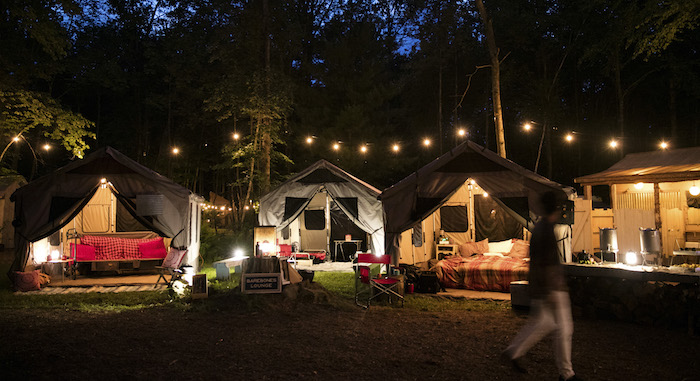 In September, the footwear brand will promote the launch of a new hiking boot at The Outpost’s event at Camp Navarro outside of San Francisco.

While regional events will stay intimate and invite-only (approximately 200 people), Camp Navarro is being billed as The Outpost’s flagship event. The event will host 100 brands and unique activations and 500 to 700 attendees, including general admission tickets, which Wolfe said are likely being purchased by fellow industry folk passionate about brands and marketing.

Up next, The Outpost team plans to build up the media side of its business. “I think something special happens outside of four walls and so much of our project is providing brands with the right tools to amplify their story,” Wolfe said. “We are creating so much content, we need to create a destination for it.”