Modern consumers want to ensure their shoes survive an impromptu rainstorm and brands are following up by delivering multipurpose stylish footwear with waterproof properties.

“I think consumers are looking for versatility and not wanting to run around in a tall rain boot all day,” said Beth Goldstein, NPD Group executive director, industry analyst, accessories and footwear. “Brands like Sam Edelman and Vince Camuto and even Kate Spade, [all have] a style that looks like traditional fashion boots. Even though they’re all rubber you can’t tell until you get close. That’s where we see growth on the rain boot side.”

Goldstein reported that waterproof footwear outside of the rain boot category saw double-digit growth over the last two fall retail seasons. Goldstein added that the women’s category is primed for growth, adding, “It’s bigger and more fragmented—definitely more opportunity there.”

While the concept of waterproof footwear is not new, the execution is trendier as brands like Aquatalia, Sporto, Cat and Emu Australia elevate materials and designs.

Emu Australia introduced waterproof elements to its collection in 2012, when the brand started experimenting with waterproof breathable membranes. Alex Michelman, regional sales manager for Emu Australia, says if women, particularly in the Northeast, are going to drop $200 on a pair of fashion boots, they want that boot to works for all occasions. “One thing for sure is you’re not going to lose the sale if it’s waterproof,” said Michelman. “But if it’s not waterproof you could lose the sale.”

After Kyrie and Kanye Catastrophes, Celebrity Endorsements Ripe for Review

Wolverine Says Layoffs Will Save $30 Million

Keds is adding weatherized elements to its Fall ’17 collection through its new Scout boot. “We’ve experimented with weatherized features in the past but this is the first time we’ve built an entire collection around the idea,” said Keds President Gillian Meek. “The collection seamlessly integrates wet weather essentials such as water and stain repellents including Scotchgard, traction treads, all-season materials and warm linings. Interpretations of technical materials including nylon and coated twill add a touch of durability, but still feel modern.” 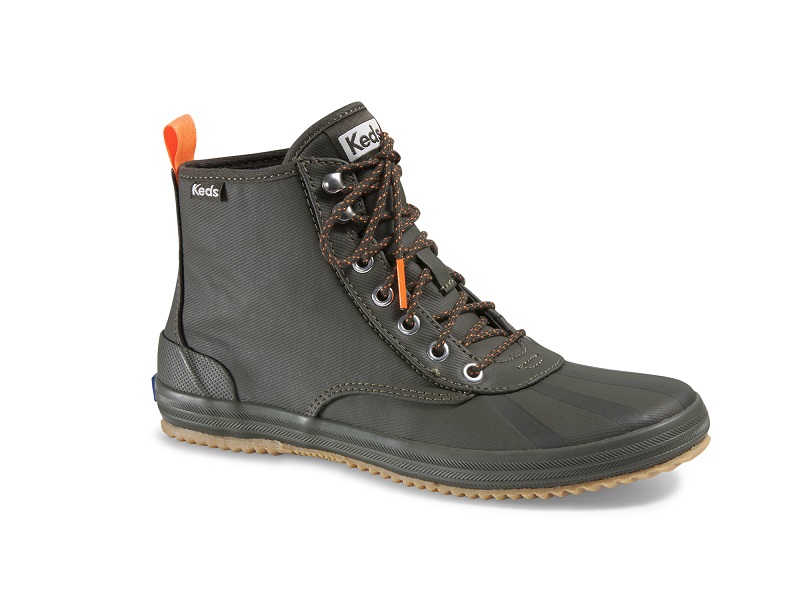 Meanwhile, Khombu, a division of the Eastman Group, has reached outside its core snow boot business to offer more waterproof fashion footwear. In doing so, the brand has reached new customers.

“Our aim is to expand our customer base—answering their desire for [Khombu], multi-functional, multi-seasonal fashion footwear,” said Brandy McCarty, divisional VP of global brand strategy at Eastman Group. “I would call it more of an evolution for the brand—interpreting fashion and climate trends, listening to customers, retail partner feedback and market considerations.”

Goldstein said there’s greater opportunity for brands to add waterproof features to season-less styles. “We talk about certain ankle boots and silhouettes being much more season-less and year-round. They’re still year-round and much more valuable if they’re waterproof,” said Goldstein. “I also think there’s the opportunity for traditional rain boot brands to start moving into the leather market.”

Waterproof footwear is an easy solution for unpredictable weather patterns, but the product doesn’t always sell itself. Retailers often find the concept hard to convey to consumers without infinite hang tags explaining the technology.

“I think if brands can market the fact that there are these multiple features that can get them more use out of the shoes or boots, customers are going to respond to that,” said Goldstein.