About six or so years ago, teen girls at high schools everywhere paired Ugg boots with sweatpants during the winter, and Uggs with shorts when spring hit. It was a sort of uniform of the disheveled—at once comfortable, if not necessarily runway ready. Cut to today, and retailers from Target to Carbon 38 to Barney’s are touting athleisure for all—and it’s even being promoted as work appropriate.

Amiyra Perkins, a consultant with WGSN Mindset, the consultancy division of WGSN, says athleisure is maintaining its traction and expanding into the workplace because health and wellness are no longer a trend, but a lifestyle.

“This is driving a need for comfortable clothing all day,” Perkins says. “Couple the health craze with a rise in more creative workspaces, and there is a real need for casual workwear that is still clean and polished. The beauty behind collections like Tory Burch, Todd Snyder for Champion and the Gap, is that new materials are being introduced to the consumer, think corporate contemporary. It’s not about being stuffy, it’s about being sharp. What was once considered casual silhouettes or materials, are now being used in a more elevated way. Think stretch blazers, woven joggers and performance-driven basics. These help create a great framework for building out a workwear wardrobe.”

The Euromonitor International reports U.S. sales of sportswear, including performance, outdoor and “sports-inspired” clothing and shoes, advanced 7.8% to almost $91 billion last year, and 27 percent ahead of 2007.

When it comes to everyday apparel, three in four consumers say they are unwilling to sacrifice comfort for fashion, according to the Cotton Incorporated Lifestyle Monitor Survey. Additionally, seven of 10 consumers are also looking to wear one outfit all day long for several activities. 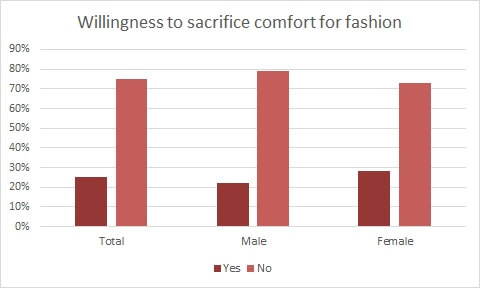 That’s how athleisure has come to find a place for itself at the office.

“We are in this casual cycle,” says The Doneger Group’s Roseanne Morrison, fashion director. “We’re seeing sneakers with dresses out on the street, when it used to be just fashionistas who wore that look. It’s this whole movement. Active companies like Carbon 38 are saying how it’s possible to wear athleisure at the office, with just a tweak to make it work.”

The making it work part can be confusing to many consumers. That’s where it’s helpful to have stores and brands show examples of what is or isn’t office appropriate.

“How we dress does not mean attire has ceased to communicate about professionalism.”

“If stores and designers have athleisure pieces, it helps to show how to interpret them,” Morrison says. “An example would be how Chloe showed a track jacket with a maxi dress. Stores have to think about presenting the category in a way that makes for multiple sales and gives consumers ideas. It’s more of a how-to. Stores are responsible for educating the customer about what goes with what — like what jacket goes with a jogger pant, or which top goes with yoga pants, etc. The more they educate, the better for their bottom line.”

On average, consumers own seven athletic items, which has increased 19 percent over the last year, according to Monitor data. Males and those ages 25-to-34 own significantly more than their counterparts.

Of course, easygoing California style combined with the casualness of the ever-growing tech industry fueled a lot of the casualization seen in today’s workplace. But what passes for appropriate in some fields doesn’t work everywhere, says Tom Kolovos, stylist, TV commentator and editor of the style blog “A Controlled Substance.”

“How we dress does not mean attire has ceased to communicate about professionalism,” he states. “There are just more options. What confuses people is the multiplicity of options.”

Kolovos points out that even though Facebook founder Mark Zuckerberg is always seen in a T-shirt and hoodie, his pieces are clean, pressed and free of messages and logos. He adds that Zuckerberg’s choice of a dark gray tee and dark hoodie still exude power, despite being non-traditional CEO garb.

“But for the rest of us who aren’t billionaire owners of our own companies, the rule is: you shouldn’t look like you just came from or are going to someplace other than work,” Kolovos says. “A skirt with a sweatshirt won’t get you called out. But if you wear yoga pants, cover your behind while you’re at the office. And if you’re a guy who doesn’t want to wear a tie, that’s great. But don’t wear shirts with graphics or a polo shirt you got as a golf outing giveaway.”

Compared to activewear made from synthetics, more than six in 10 consumers say cotton activewear is best suited for athleisure activities such as hanging out at home (73 percent), running errands (66 percent), and doing yardwork (62 percent), according to the Monitor data. While the majority of consumers (56 percent) describe athleisure clothing as activewear worn for purposes other than exercise, about a quarter (24 percent) say they are clothes not marketed as activewear but with the look and feel of activewear—and a fifth don’t know what athleisure even means.

Industry experts agree that Millennials are more likely to gravitate toward athleisure style than the older Boomer generation.

“Athleisure definitely varies by age based on the fact that Gen X and Boomers grew up having different guidelines for work-appropriate clothing than Millennials and Gen Z,” WGSN’s Perkins says. “Different regions and industries may influence this as well, but I think it’s important to know what the guidelines are and finesse from there.”