Cotton prices have increased by 4 cents per pound so far in 2018, a rise of about 6 percent, to 80.5 cents as of the end of April, according to data from the U.S. Department of Agriculture (USDA).

The seven-market U.S. average cotton spot price, which ended 2017 at slightly over 76 cents per pound, peaked at 78 cents in mid-May last year. From there, it followed a fairly volatile path for the next several months, before beginning to drift upward. 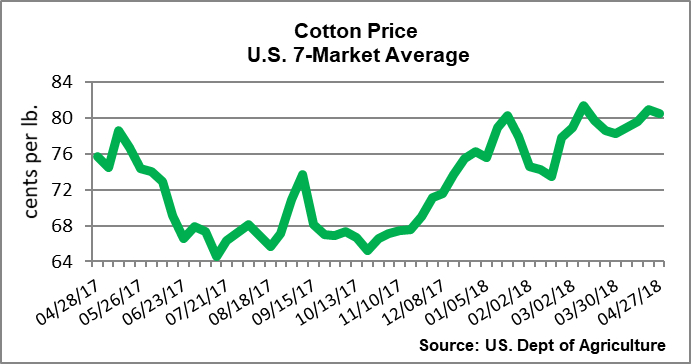 World cotton production is expected to increase by 11 percent to 122 million bales during the current 2017/2018 crop year. World mill-use, or demand, is forecasted to grow by 4 percent, to 120 million bales. Taking China out of the mix, the increase in mill-use remains at 4 percent.

Stocks outside of China, most of which are freely traded, are expected to grow to a new record level this crop year, 23 percent compared to last year and exceeding the previous record by 10 percent, according to the USDA.

Ending stocks in the U.S., the world’s largest exporter, are forecast to increase by almost 90 percent to 5.3 million bales this season.

It is important to make the distinction between supplies inside and outside China since cotton stocks in the country are largely government-controlled, and cannot be exported without violating WTO rules. Chinese cotton import quotas are at low levels, reducing its direct interaction with the world market. Stocks in China are expected to finish the 2017/2018 season about 15 percent below last year.

However, as the Cotton Incorporated April Economic Letter noted, the importance of China as a cotton customer to the U.S. and other export countries should not be understated. The recent trade-related announcements between the U.S. and China adds another level of uncertainty, and therefore volatility, to the cotton market. Although initial salvos threatening increased tariffs didn’t include cotton on the list of U.S. goods that could get hit, subsequent ones did. It remains to be seen what the future of trade policy will be between the nations.

The relative increases in production compared to mill-use would suggest that prices would be dropping, while quite the opposite is happening.

There are several possible reasons for the divergence, including factors relating to the fact that the market tends to be forward-looking, and that transitions to new factors influencing the market may be on the horizon.

As China draws down its stocks of cotton reserves, it can be expected to start importing more, which will mark a major transition in the global market, and could pull prices higher. The upward movement in prices this year could be in anticipation of that pull.

Another transition is that global cotton production is expected to decrease due to expectations that weather will be average compared to that of the current crop year, in which it was exceptionally good.

There are also technical factors relating to the changing ways in which contracts are done that could impact pricing. These changes are causing speculators to hold back on commitments, which may be buoying prices.