After remaining flat on a dollar basis in 2017, U.S. apparel imports rose slightly in the first quarter as retailers and brands benefitted from improved consumer spending amid strong job growth and a buoyant stock market.

According to data released last week by OTEXA, the International Trade Administration’s Office of Textiles and Apparel, total U.S. apparel imports increased by 1.6% on an MFA basis for the first three months of the year, to $19.2 billion from $18.9 billion in the year earlier period.

Vietnam, Nicaragua and Honduras gained a bigger piece of the U.S. import pie, taking share from Indonesia and others as more U.S. retailers and brands exploit near-shoring opportunities to improve speed to market and reduce carbon footprint. Indonesia, on the other hand, lost significant ground, with the biggest share decline among top 10 apparel trading partners.

On a square meter equivalent (SME) basis, imports rose by 1.7%, indicating a very slight shift toward cheaper goods compared to last year. The average cost per square meter of imported garments fell by a negligible 0.1%.

Imports from Nicaragua grew by almost 10 percent in the quarter, the most of any top 10 trading partner, to $355 million, gaining the Central American nation a 200-basis-point increase in share of U.S. apparel imports. Total SMEs from Nicaragua rose by 6 percent, resulting in an average cost increase of 3.7%. Intimates and underwear were the key growth product categories from Nicaragua.

Honduras also enjoyed a nice uptick in shipments to the U.S., of 6.5%. Total SMEs plunged by 6.6%, resulting in a 14 percent increase in cost of these U.S.-destined goods, evidence that as premium brands seek more local options for ready-to-wear, CAFTA countries are responding.

For the first time in recent memory, Cambodia emerged as an up-and-comer, increasing its apparel exports to the U.S. by 6.3%, to $522 million. However, the increase was in cheaper, more basic goods, like cotton and manmade fiber tops and bottoms. The average cost per SME fell by almost 6 percent.

Vietnam has gained an almost 300-basis-point share of U.S. apparel imports so far this year, to $2.7 billion. SMEs were up by 1.7%, resulting in a cost increase of 1.6% compared to last year.

China’s dollar share of U.S. apparel imports, which peaked in 2010 at more than 39 percent and has been on a slow decline ever since, ended 2017 at 33.7%, where it still remains as of the end of the first quarter, as higher costs and recently-revived fears of higher tariffs are driving many brands to seek sourcing options in Southeast Asia and elsewhere. Imported apparel from China increased by nearly 1 percent in the three-month period. Volume rose by 3.7% on an SME basis, however, driving cost down by 2.7% compared to last year, presumably a result of brands moving the production of more labor-intensive and complex garments to other countries.

Indonesia’s apparel exports to the U.S. suffered the biggest percentage decline of any top trading partner compared to the prior year, down 5.7% to just over $1.2 billion for the quarter, with most of the decline in knit and woven tops.

Other countries creating buzz with their low labor costs and early success in attracting investors and apparel customers remain tiny relative to total U.S. apparel imports. Ethiopia’s apparel exports to the U.S. doubled to $22 million in the period amid the improved political situation in the country. Myanmar’s shipments, on the other hand, increased by only 37 percent to $34 million. Haiti’s exports to the U.S. fell 3.3% below the first quarter of 2017, to $194 million.

Apparel imports from Italy rose by 20 percent to $312 million. 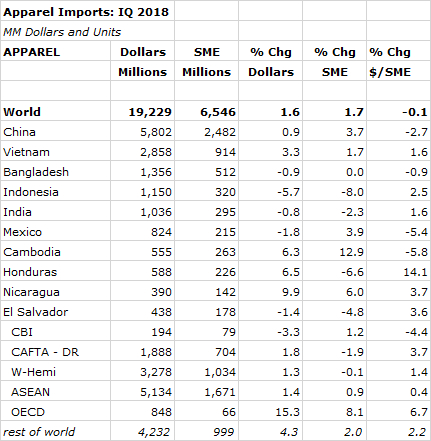 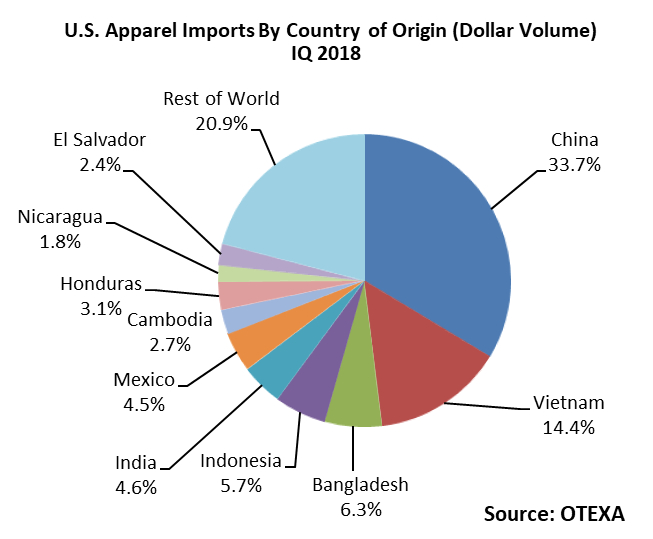 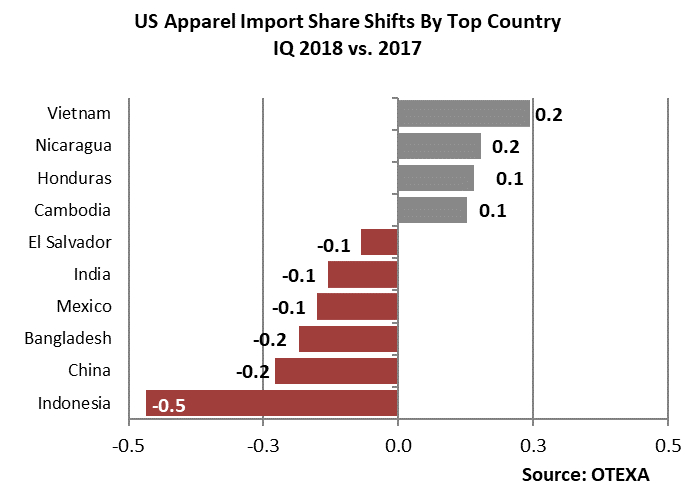