Global synthetic fiber prices continued their upward climb during the first four months of 2018, increasing by 6.4% since the end of 2017, according to data from fiber consultancy PCI Wood Mackenzie. 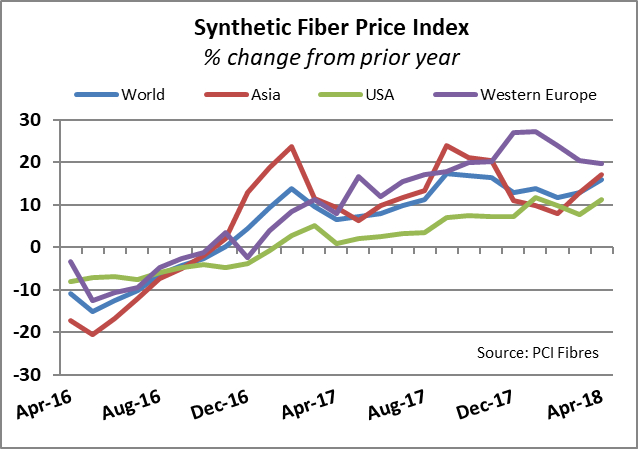 The firm’s Synthetic Fibers Index, which has risen every month this year so far, was buoyed by increased global demand for apparel and textiles and higher oil and intermediates costs.

Crude oil prices rose about 20 percent to $66 per barrel in 2017, which together with strong demand for man-made fibers, have allowed producers of polyester and nylon intermediates and fibers to increase their prices. Although at the end of 2017 energy experts were forecasting that tight supplies would ease and oil prices would settle down somewhat in early 2018, that hasn’t happened. Oil prices increased 13 percent in the first four months of the year, with Brent Crude above $74 at the end of April.

In Asia, the world’s largest fiber-producing region, synthetic fiber prices rose by 4.5% in the January-April period, with the index rising in each of the last three months.

Textile fiber sources report that polyester capacity utilization remains high in China due to strong demand, and in the U.S. due to trade protection.

Invista is building an innovation center in China in anticipation of being acquired by Shandong Ruyi’s acquisition of its Lycra, Coolmax, and other brands and assets later this year.

Asian synthetic fiber prices remain more than 21 percent below the world average, down from 20 percent below as of the end of 2017.

Nylon ingredients have been tight worldwide due to several force majeures starting with the hurricane last fall and continuing through several cold weather events in the U.S. and Europe. More recently, labor strikes in Europe have also played a role. Viscose demand has reportedly weakened in the past couple of months.

The U.S. index rose 8.6% percent in the period, the most of any major producing region. U.S. synthetic prices remain almost 48 percent above the world average. Trade protection has reportedly helped polyester staple prices, while acrylic demand in the U.S. is reportedly very soft.

During the first four months of the year, the gap between prices in the most expensive region (the U.S.) and the least expensive (Asia) widened a bit, a trend that is not expected to persist as the industry becomes increasingly global. 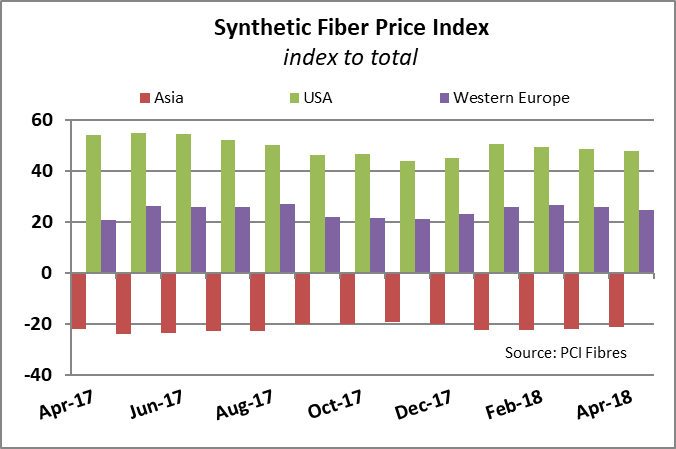