Adidas’s design future might lie somewhere in the past.

That is certainly the case with the sportswear maker’s Terrex Futurecraft.Loop anorak, a prototype of a 100 percent recycled and recyclable jacket designed to be returned to the brand at the end of its life and reconstructed into new products.

Like the Futurecraft.Loop sneaker that preceded it, the anorak is an experiment in plastic-waste mitigation and circularity meant to pave the way for a broader line of products that are “made to be remade,” in Adidas’s words. The entire jacket—from the outer shell to the stuffing to the sewing thread—consists of a single material, specifically recycled polyester derived from Parley for the Oceans’ collected plastic waste. This, in theory, should allow it to be broken down in its entirety without the need for disassembly, sorting or multiple recycling streams.

The idea behind the concept is to create a garment that never molders in a landfill, taking a bite out of the prodigious amount of fashion that goes to waste as a result of the current linear take-make-dispose system. Though 13 percent of the material used to produce clothing is recycled in some way, most of it takes the form of lower-value applications, such as insulation, wiping cloths and mattress stuffing, according to the Ellen MacArthur Foundation. Only 1 percent is recycled into new clothing, representing a loss of more than $100 billion worth of potential resources every year.

For Birgit Freundorfer, design director at Adidas Outdoor, creating a recyclable jacket required her to “unlearn the now.” Instead of building up a garment by “adding complexity,” such as stiffeners, Velcro, zippers or enclosures, Freundorfer had to pare everything back. For inspiration, she referred to “ancient solutions” employed by early explorers who did not have buttons, let alone today’s vast library of trims, at their disposal. “We have this approach of decoding the past to recall the future,” she told Sourcing Journal.

Indeed, the anorak, a historical design that opens only at the neck, bottom and sleeves, has no need for front-facing fasteners. But all other surplus details have been stripped away, as well. Adidas designed the sleeves, hood and pockets to be cinched and loosened using fabric sashes rather than elastic or drawcords. The jacket is also an undyed white, which Freundorfer says allows the company to use less water, energy and chemistry to create. Only the Terrex logo, which the German juggernaut laser-etched into the jacket, giving it a singed, pale-yellow appearance, offers a suggestion of color and flair. 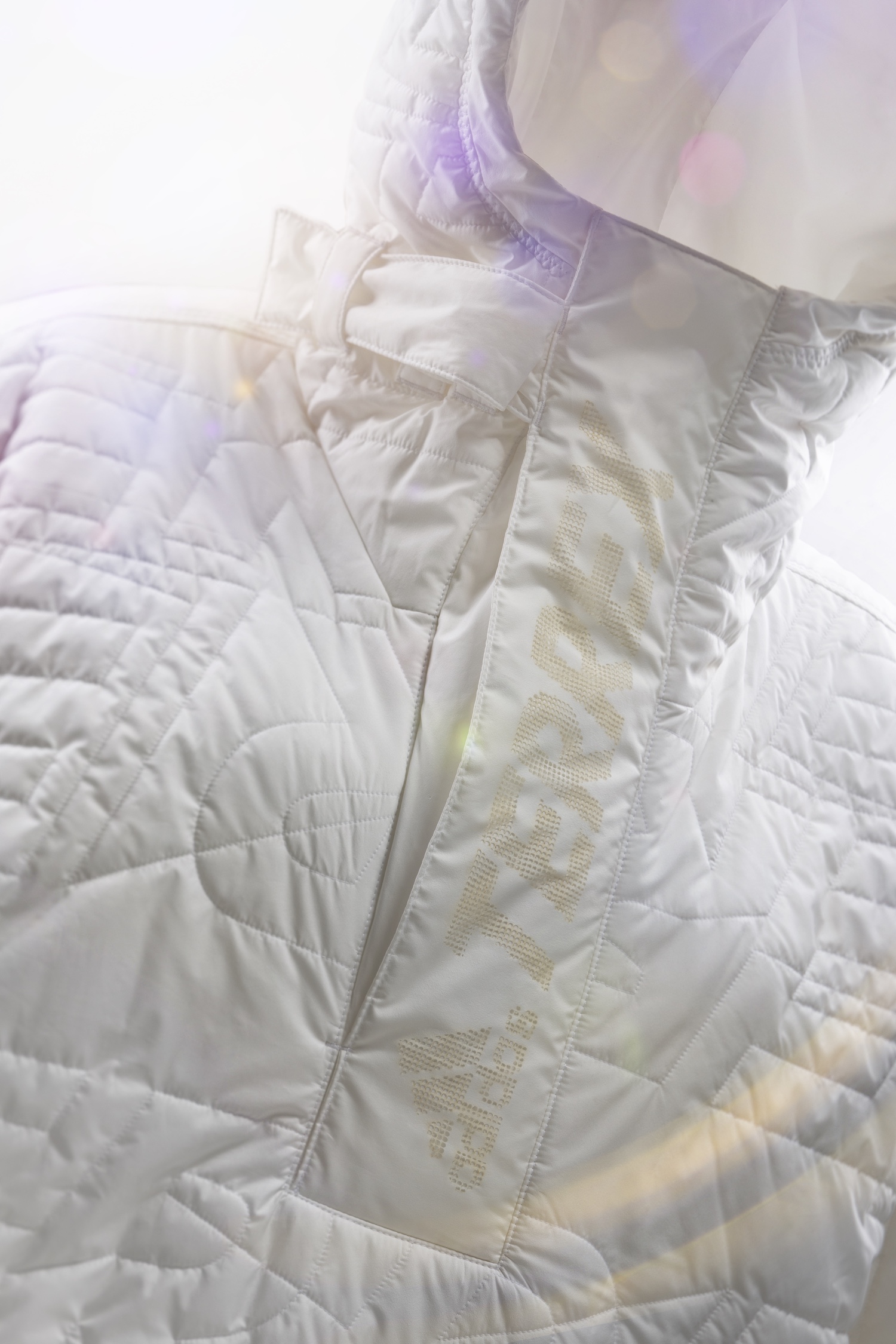 The triple-stripe firm tasked longstanding partner PrimaLoft to work with Parley for the Oceans to develop an insulation that would work with the anorak’s monomaterial strategy but retain the same performance as Adidas’s other fills. Working with beach-cleanup waste wasn’t without its challenges, said Vanessa Mason, senior vice president of engineering at PrimaLoft. “It has a bit more contamination and a bit more degradation than we’re used to,” she told Sourcing Journal. “But it was a really nice three-way collaboration to be able to extrude the Parley material at the yield rates and processing speeds we need to achieve.”

PrimaLoft and Parley’s insulation can be chemically recycled at a yield surpassing 95 percent, Mason said, though Adidas is still deciding on what the next steps for the jacket will look like. The company has just concluded a six-week testing phase with 50 “creators” from around the world—all women, including this reporter—to expose the anorak to real-world conditions and gather feedback. The jackets are now being dispatched back to Adidas, which will embark on the next phase of the pilot.

“We’re still exploring which way of recycling will be the one that we will be taking, so it could be chemically or it could be mechanically,” Freundorfer said. The mode of recycling will also have to take into account any future iterations of the jacket, which may be less “purist” and “more practical” in its approach, she said. If Adidas decides to add buttons, for instance, then chemical recycling that melts everything down for reextrusion into fibers is likely the way forward.

If dyes are added, the company will have to figure out how to decolor the yarns. It’s a nuanced issue, Freundorfer said. If a garment is white, it might need to be laundered more often, which requires more water and energy. A colored garment uses more water and energy at the outset but maybe doesn’t have to be washed as much. “[We have] to always look at the bigger picture of production and usage until [the] end of life,” she said. The jacket has no durable water repellency or other types of finishes, since Freundorfer was told they would interfere with the recycling process. Again, that might have to change to suit consumer expectations.

While the pilot for the Futurecraft.Loop sneaker, which is now available for purchase on the Adidas website under the “Made to be Remade” label, provided some learnings that could be applied to the anorak, garments have their own unique challenges. Yarns used in clothing are much finer, for example, Freundorfer said. Adidas’s garments are also produced at different factories using inputs from different material suppliers. The biggest hurdle, she admits, is how to recycle the anorak–and similar products—at scale. If Adidas cracks the code, it’d be the first to.

Adidas says it’s on a quest to end plastic waste. By 2024, the company will replace all virgin polyester with recycled versions. Whether those products can be recycled, and then re-recycled in turn, is a question Futurecraft.Loop seeks to answer.

Adidas is on a tight deadline; it’s hoping to release a windbreaker form of the anorak to the public by mid-2022 and then a more insulated jacket that winter. The outdoor division is also planning to marshal the running and tennis units in similar efforts so Adidas can achieve a critical mass of products around which to create infrastructure. “If you only have a few, it doesn’t really work,” Freundorfer said.

But more than keeping textiles from going to waste, Freundorfer says she’d like to see Adidas customers develop a deeper relationship with their clothing. Like the sneaker, all Futurecraft.Loop products will feature a QR code that customers can scan when they’re ready to return them. But this code could also capture customer feedback or make it easier for products to be rented or resold.

“There’s a conversation and there’s experiences that [can] be shared,” Freundorfer said.