Canadian outdoor brand Arc’teryx’s series of hands-on workshops shows consumers how they can help their clothing and gear last longer.

The Arc’teryx store on La Brea Ave. in Los Angeles recently doubled as a cut-and-sew facility where pre-owned outerwear such as ski jackets, pants, vests and fleeces were deconstructed and transformed into new items. Alongside the brand’s design team, consumers created belt bags, chalk bags or reimagined garments from reclaimed textile waste. 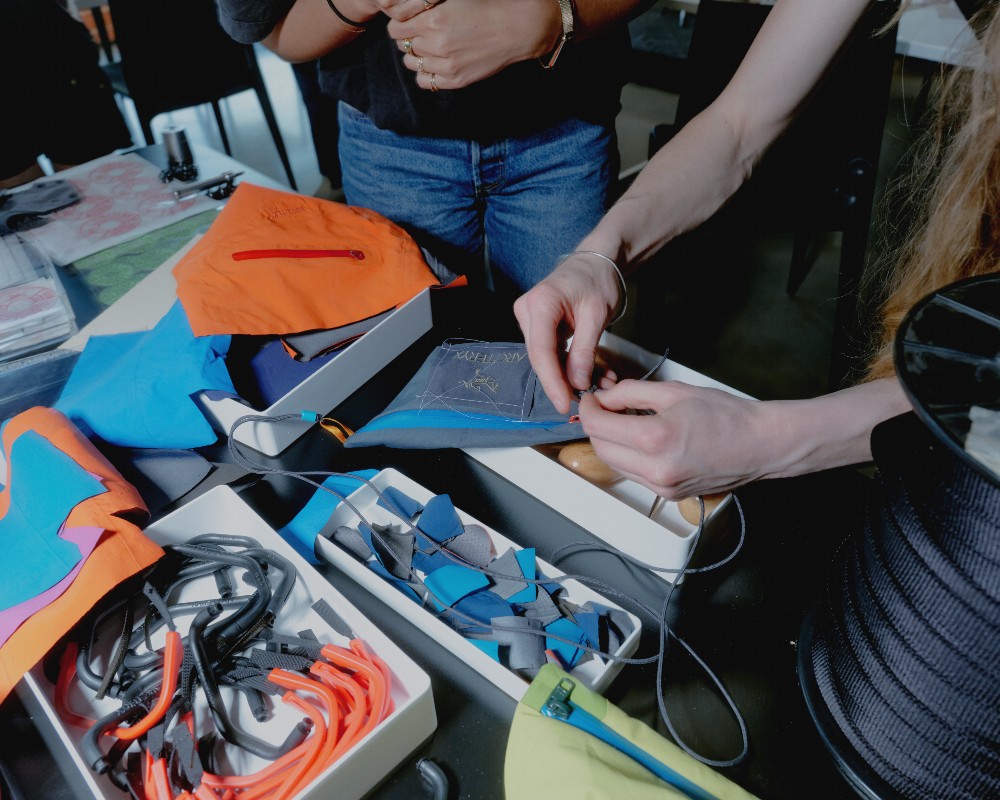 The event was the first of three public workshops. According to Arc’teryx, the Circular by Design initiative was conceived last year with Nicole McLaughlin, a New York-based designer who specializes in upcycling retail samples and salvaged materials, who now serves as a brand ambassador on the project. The public seminars and upcycling events help consumers see how they can rework the items they already own and learn the basics of at-home tailoring. McLaughlin, who has worked with labels like Calvin Klein, Fila, Puma, Opening Ceremony and Prada on special projects, crafted a number of one-of-a-kind pieces to be auctioned off to support the Lagartijas Climbing Cru, an L.A.-based group of BIPOC climbers.

“As a brand that really commits itself to durability and extending the life of the products, we really firmly believe that we need to keep them out of landfills,” Arc’teryx’s ReBird vice president Dominique Showers, said. Launched last year, the ReBird circularity platform currently allows e-commerce shoppers to purchase a small selection of upcycled outerwear and accessories. Showers wants to expand the number of channels making use of Arc’teryx apparel waste.

While the company re-sells a selection of used product through its Used Gear microsite, it is currently working to develop the infrastructure to facilitate extensive product take-back and refurbishment. “These workshops are opportunities for us to engage with the community, to test and learn, and to figure out how we can actually scale,” she added. One option is an ongoing platform to work with designers like McLaughlin to create unique capsules made from waste-bound goods.

A challenge for the brand—which sells high-performance Gore-Tex jackets and technical gear for climbing, hiking, skiing and snowboarding—is ensuring that used goods stand up to rigorous quality and performance standards. Though attendees took fabric shears to garments that looked to be in “phenomenal condition” at the workshop, Showers said appearances can be deceiving.

Gore-Tex products need to be washed regularly in order to guard against membrane de-lamination, she said. Consumers who miss this step allow dirt and grime to build up. Skipping maintenance causes the layers of fabric to pull apart internally (a condition often invisible to the untrained eye). When that happens, “the jacket is toast,” and it loses its weather-proof qualities. Creating smaller, one-off items like belt bags from these “problem products” enables designers to make use of their undamaged areas, Showers said.

Part of the goal of the workshops, which Arc’teryx said will continue on in other locations, is to encourage shoppers to hold onto products that they believe are beyond-repair. “There’s a waste stream of great material that can become something beyond a jacket or a pair of pants,” McLaughlin said. Working with consumers, “you see this realization taking place in front of your eyes.”

Equipment designer Mike Foley said that in the absence of a full take-back program, Arc’teryx hopes to show consumers “how accessible it really is” to undertake upcycling at home. While repair and reuse may not replace the fast-paced, season-to-season trend cycle, “that doesn’t mean that you can’t play with those existing pieces and make them something current or relevant that you’re excited about.”