Prada is swapping out its signature virgin nylon for a “regenerated” soon-to-be classic.

A year after it rolled out a capsule line of bags and outerwear derived from recycled ocean plastic and textile waste, the Italian luxury house is ready to incorporate the Re-Nylon material into the wider spectrum of ready-to-wear, footwear and accessories, including re-skinned versions of its classic nylon gabardine coat and feather-down puffer. “Here, both are reinvented for the 21st century in entirely regenerated and future-sustainable Re-Nylon textile—a next generation Prada,” it said in a press release Thursday.

Prada developed Re-Nylon in collaboration with fellow Roman company Aquafil, whose regenerated Econyl fiber has appeared in products by some 750 brands, including swimwear by Reformation, eyeglasses by Tommy Hilfiger, activewear by Prana, jackets from Outerknown and outerwear from Stella McCartney. Re-Nylon, like Econyl, can be recycled “endlessly” without a loss in quality. By the end of 2021, Prada says, all its nylon products will comprise Re-Nylon instead of nylon made from crude oil. 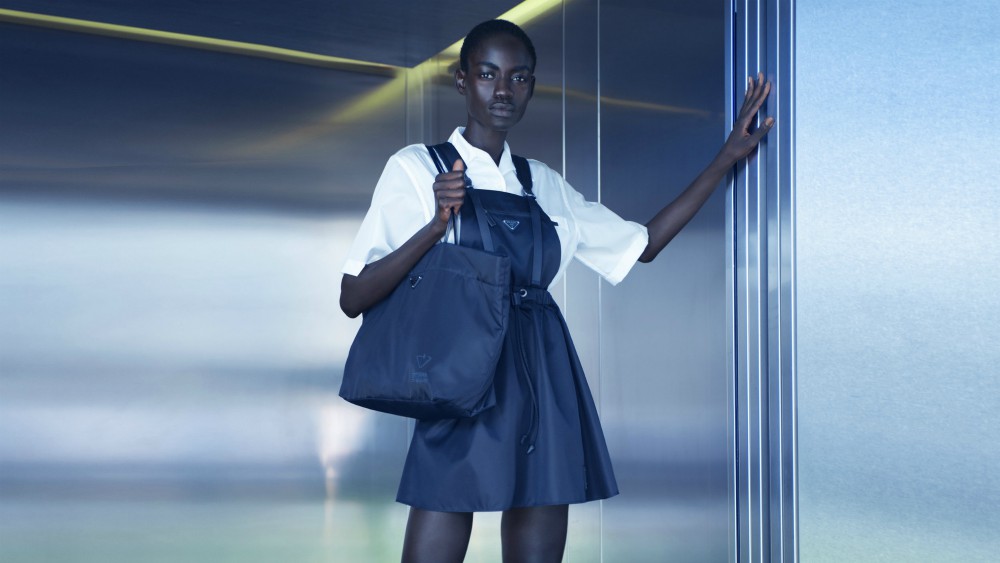 The new Re-Nylon pieces, the brand says, fuse “sportswear elements with silhouettes and approaches of luxury” and feature slim-line tailored single-breasted overcoats for men and full-skirted cocktail dresses for women. There are non-gendered offerings, too, such as padded jackets, T-shirts, bucket hats, belts, combat boots and low-top sneakers. And of course bags—plenty of bags, including belt-bags, backpacks, cross-body bags and an archival Re-Edition style dusted off from 2000, which highlights the “continuous and timeless appeal of Prada nylon.”

Prada’s iconic 1984 nylon backpack, the “first introduction of nylon into the sphere of luxury,” manifests in more ways than one. The company borrowed some of the same cues for a few of its looks, adapting those familiar front pockets, buckles and webbing shoulder straps to create fresh context and new points of visual interest.

“By seemingly reworking the Prada backpack into a dress, it also echoes the notion of recycling and regeneration, the changing of old into new that is central to the ethos of Re-Nylon,” Prada said.

All accessories and garments feature the Prada Re-Nylon logo, which reshapes the Prada triangular logo into a looping arrow, a “symbol of perpetual renewal and of the cyclical, everlasting life of Re-Nylon.” The production of Re-Nylon generates up to 90 percent less global-warming impact than conventional nylon, which helps advance Prada’s broader sustainability goals. 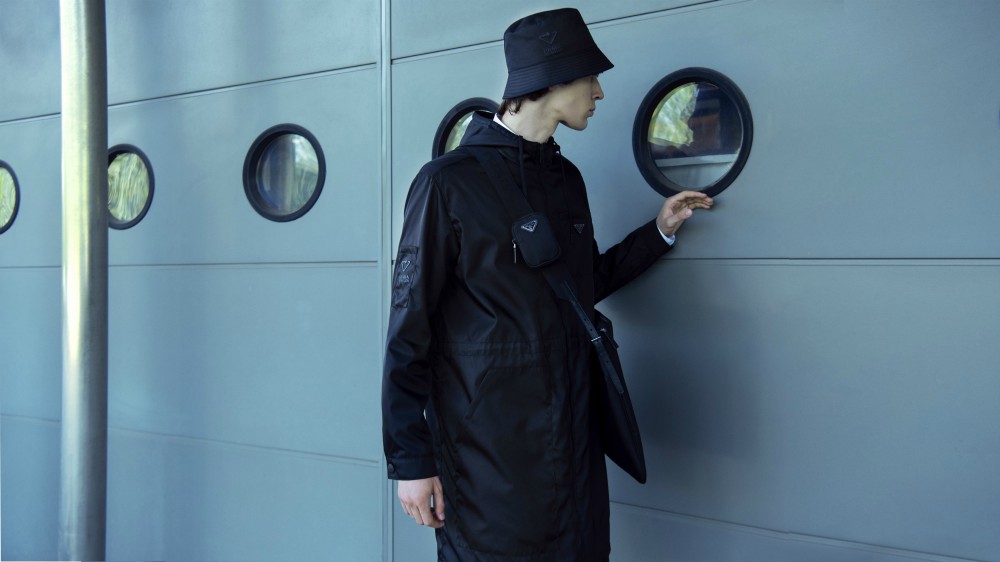 Prada is a signatory of the G7 Fashion Pact, committing it to the implementation of Science Based Targets to achieve net-zero carbon impact by 2050 while tackling the issues of climate change, ocean protection and biodiversity. The Kering-spearheaded initiative revealed its progress, one year after its formation, at the virtual Copenhagen Fashion Summit on Monday, noting that it has defined tangible targets and key performance indicators but that the “road ahead is long.”

Re-Nylon, Prada says, is not an idea of luxury, but an ideology, one that is “sustainable and truly responsible.”

“Re-Nylon proposes a new notion,” it said. “It transforms not only methods of production, but also that of the final product—in that it proposes that no product is truly final.”