Prana has given single-use plastic the ol’ heave-ho.

The California lifestyle brand announced Tuesday that it has “officially” attained its goal of using only 100 percent plastic-free consumer packaging with the launch of its fall/winter collection.

The milestone coincides with the first anniversary of the Responsible Packaging Movement (RPM), an initiative Prana kick-started with nonprofits such as 5 Gyres and Canopy to develop sustainable alternatives to the 180 million-plus virgin polybags the garment industry deploys every year, often to the detriment of the world’s waterways and marine life.

Mara Hoffman, Outerknown and Toad & Co. quickly threw their support behind the program. One year on, the RPM has rallied 80 brand partners across the outdoor, fashion, beauty, technology and home goods industries, including Asket, Everything But Water, Hanky Panky, Merrell, Nuuly, Reformation, Smartwool and Vestiaire Collective.

Prana’s plastic reduction efforts aren’t anything new, Rachel Lincoln, the Columbia Sportswear-owned brand’s director of sustainability, told Sourcing Journal. The company gained some ground by switching out plastic swift tacks for 100 percent recycled paper hangtags and cotton string, then by wrapping its accessories in origami-style paper packaging free of plastic and metal fasteners. Instead of plastic mailers, it dispatched kraft paper versions or corrugated cardboard boxes. And between 2010 and 2019, Prana punted more than 17 million polybags by rolling up its clothing and securing the bundles with strands of raffia.

“We got to the point where about 80 percent of our product was shipped with the raffia tie,” Lincoln said. “But the other 20 percent was still in plastic and it became kind of a plateau.”

Amazon Accused of 'Greenwashing on a Grotesque Scale'

Later on, a sourcing trip to India sparked an idea: Could Prana use paper instead?

It was that a-ha moment that led the firm to knock on the door of Vela, a manufacturer of Forest Stewardship Council-certified paper bags. Several tweaks and pilots later, Prana found the key to closing its plastic gap: a glassine envelope that is not only durable and weather-resistant but also more recyclable than plastic. Employing virgin, if sustainably sourced, wood pulp is only a temporary measure, Lincoln said. By 2025 all of its paper packaging—the Vela bags included—will contain only 100 percent recycled content. 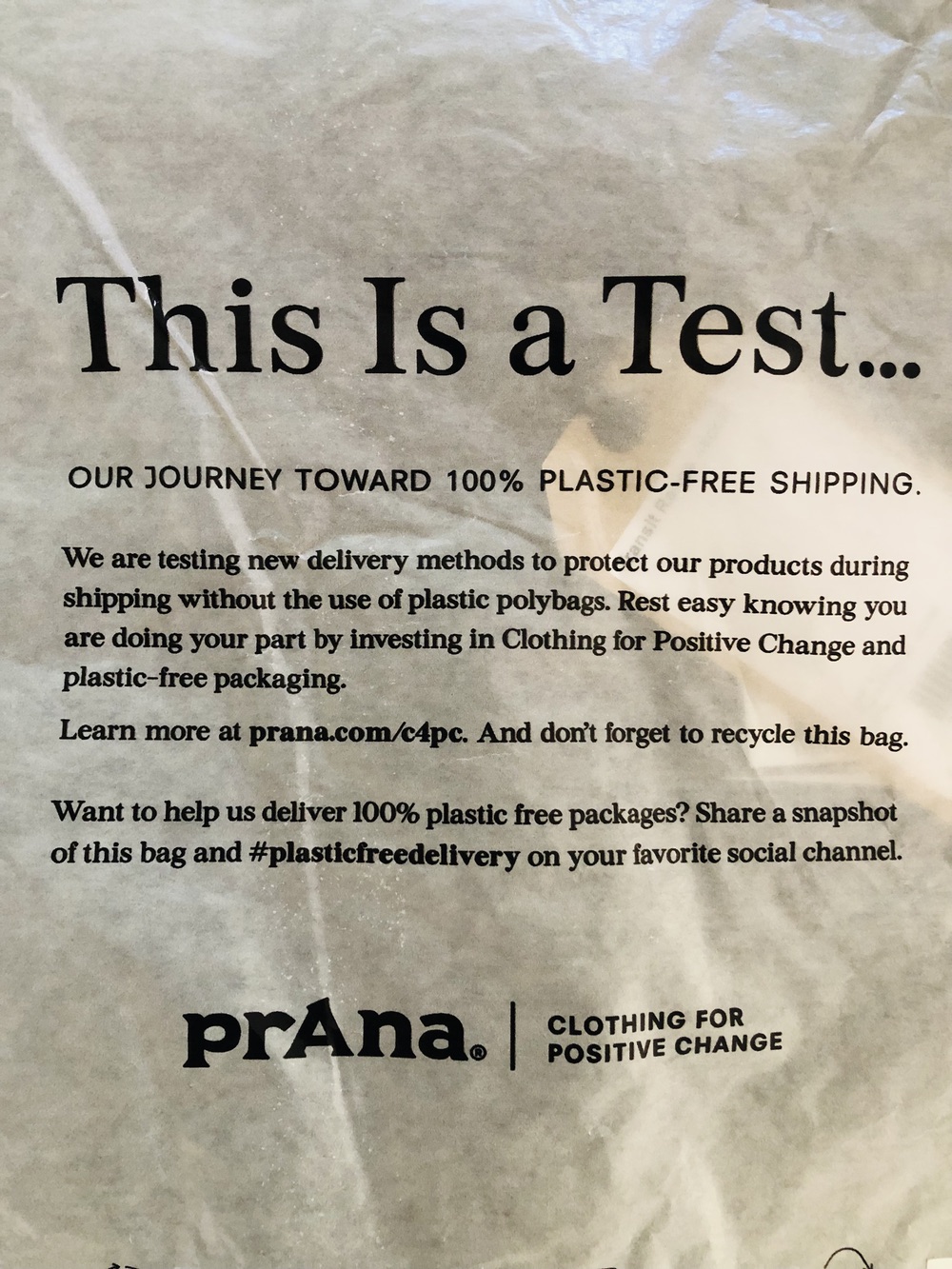 The glassine envelopes are being used behind the scenes as well, though there was a “socialization period” with its factories that didn’t happen overnight, Lincoln admitted. At first, Prana’s suppliers were concerned about their wares getting damaged in transit. They were soon won over, however. “We were able to show that the paper bags function the same way,” she said.

Even so, Prana didn’t drop the idea of a polybag replacement out of nowhere.

“Before we even talked to factory X, Y and Z about doing it, we told them we were doing it, and said, ‘You know, some point down the line, we’re going to come to you and talk to you about it,’” she said. “So it’s kind of like planting seeds along the way and saying, ‘This is what we’re doing, we’re super excited, we hope you’re excited for us. Now you get to be part of it. And this is what that looks like.’”

Prana is now down to one “master” polybag—a single layer of plastic that lines the massive cartons that ship over from its manufacturing sites in China, India, Sri Lanka and Vietnam to the United States. The brand’s distribution centers, Lincoln said, operate a closed-loop recycling system that captures any plastic for recycling into new shopping bags and other products.

Now, her hope is to get more brands to do the same. If the RPM can enlist 80 brands today, why not 100 tomorrow? Lincoln said she’s elated by the outpouring of enthusiasm.

“It means that there are brands that care and want to change, and that are learning from the things that Prana did, both good and bad,” she said. “We’re able to share our best practices and help them overcome challenges.”

Still, one of the top questions Prana gets during its RPM panels and roundtables involves the cost-effectiveness of choosing paper over plastic.

“Honestly, paper is not going to be cheaper,” Lincoln said. “But maybe moving to a paper bag you’re able to get more products in a carton and therefore you’re getting a better cost differential there. Maybe you are super-passionate about responsible packaging and you’re able to work with your design team to find interesting ways to decrease the garment price to allow you to have the packaging.”

Ultimately, the question is a moot one in light of the burgeoning plastic crisis. Scientists estimate that roughly 8 million metric tons of plastic finds their way into the oceans every year, and that by 2050, global waterways will contain more plastic than fish. Consumers are waking up to this fact, too. In a recent survey by the EY Future Consumer Index, 62 percent of Americans and 73 percent of Britons rated plastic waste as their No. 1 sustainability concern.

And fashion, if anything, is about making things work.

“One of the best examples I love to use with our members is that if your creative team came to you with this super-amazing new hangtag, but it was $2 more, you would find a way,” Lincoln said. “So we, as individual brands, need to find a way to make it work for the margin that we need on the garments [because] that’s what we do every day.”