Animal-rights activists have unearthed evidence of  “deplorable” conditions and “distressing” suffering on so-called “high-welfare” fox farms in Finland, where luxury brands such as Fendi, Max Mara, Moncler, Woolrich and Yves Salomon source much of their fur.

An undercover investigation by Humane Society International/United Kingdom, Finnish animal-welfare group Oikeutta Eläimille and British veterinarian Marc Abraham, published last week, described foxes trapped in small wire cages with “painfully swollen” eyes, “deformed” feet with overgrown claws and poor body condition, including obesity. Two of the farms, the organizations said, housed “monster foxes” bred with “huge pelts and rolls of fat” rippling across their bodies to increase the volume of fur that can be harvested. Though the fur trade promised to end the breeding of oversized foxes in 2017, “this and previous investigations continue to expose their existence,” they said.

There were also indications of self-mutilation, a “clear sign of psychological trauma they must suffer as wild animals without appropriate enrichment,” Abraham said. “As a vet and campaigner who has dedicated my life to animal welfare, it was not only truly depressing to see the appalling state of these foxes, but still worse to know that the U.K. is 100 percent complicit in this legal fur trade cruelty. What I witnessed firsthand was shameful from an animal-welfare point of view: row upon row of pitiful animals imprisoned in tiny cages, barely larger than the length of their body from nose to tail.”

Of the three farms in the Ostrobothnia region that researchers visited, two had received a seal of approval from Finnish fur auction house Saga Furs, whose Saga Certification, a distillation of the Finnish Fur Breeders’ Association (FIFUR) and European WelFur standards, promotes the “highest level” of animal welfare that go “well beyond what the law requires” in terms of animal wellbeing, housing and farm hygiene.

The humane treatment of animals is the “cornerstone” of everything the company does, Charlie Ross, head of international marketing at Saga Furs, which works with more than 2,000 farms in Europe and North America, said at October’s Fashion & Sustainability Brand Summit at LIM College in New York City. Farm conditions, he said, are monitored by independent inspections, which are in turn validated by a third-party auditing firm.

“This has given great pride to the farmers that can continue to improve their activities. This has clearly shown that we have a very strong environmental program in place on the farms. This has given confidence to brands, retailers and consumers that the fur purchased by Saga Furs all come from 100 percent certified farms,” he said. “And I think it gives us all a feeling that we’re doing the right thing.”

Kristo Muurimaa, campaign and communications manager at Oikeutta Eläimille, said, however, that he has visited more than a hundred fur farms across Finland and “every single one is as horrific as the last.” Up to 2 million foxes are killed in the country every year. “To have a respected and decorated veterinarian come to Finland to witness first-hand the animal suffering is really important in exposing the truth about the fur industry,” he added.

“It must be mental torture being denied the freedom to run and exercise in their natural woodland environment that they can clearly view surrounding their cages, which their instincts are telling them to explore 24/7, but to which, tragically, they will never have access during their short lives,” Abraham said. “The U.K. government assured us that after Brexit it would consider what could be done in terms of a U.K. fur sales ban, and observing such high levels of animal suffering on those Finnish fur farms, leaves me in no doubt that right now is the time to make good on that promise.”

While all three farms are currently FIFUR certified, FIFUR confirmed to Sourcing Journal, the trade group disputes the characterization of abuse. “In total, there are almost 5,000 production animals on these three farms. Of these animals, some individual foxes had symptoms or illnesses—for example, eye infections—and they all are being treated by the farmers,” a spokesperson said. “Most likely the trespassers have deliberately looked for animals that have visible symptoms to be filmed.”

FIFUR went on to say that “secret filming” and the “selective use of images” can paint an incomplete picture of the level of welfare on farms. “In general, responsible farmers treat their animals as soon as they become aware of any health issues,” the spokesperson added. “Trespassers will not know whether the animal has received treatment or at what stage the healing process is. Moreover, all operations in the farms are strictly controlled by national laws and regulations.”

Finland is the No. 1 producer of fox fur in Europe and the second-largest in the world after pre-pandemic Denmark, which has since culled up to 17 million mink over Covid-19 mutation fears. Despite banning fur farming on ethical grounds in 2000, the United Kingdom has imported more than 850 million pounds ($1.1 billion) of fur from countries such as China, France, Italy, Poland and the United States, with more than 11 million pounds ($14.7 million) from Finland alone. Through its #FurFreeBritain campaign, Humane Society International/United Kingdom has been urging lawmakers to ban fur imports and sales, a move it says is supported by 72 percent of the British public.

“Fur trade buzzwords about welfare ring incredibly hollow when you are staring into the eyes of an animal tormented by a life of deprivation for a frivolous fashion item that nobody needs,” said Claire Bass, executive director of Humane Society International/United Kingdom, who visited the farms. “Most fashion-forward designers have gone fur-free because of the indefensible cruelty. But to those designers who still use fur, and to the U.K. government that still allows British businesses to trade in fur, our message is clear—it’s time to stop being complicit in this cruelty. It’s a clear double standard that the U.K. is outsourcing to countries like Finland the very same fur farm cruelty we banned here two decades ago.” 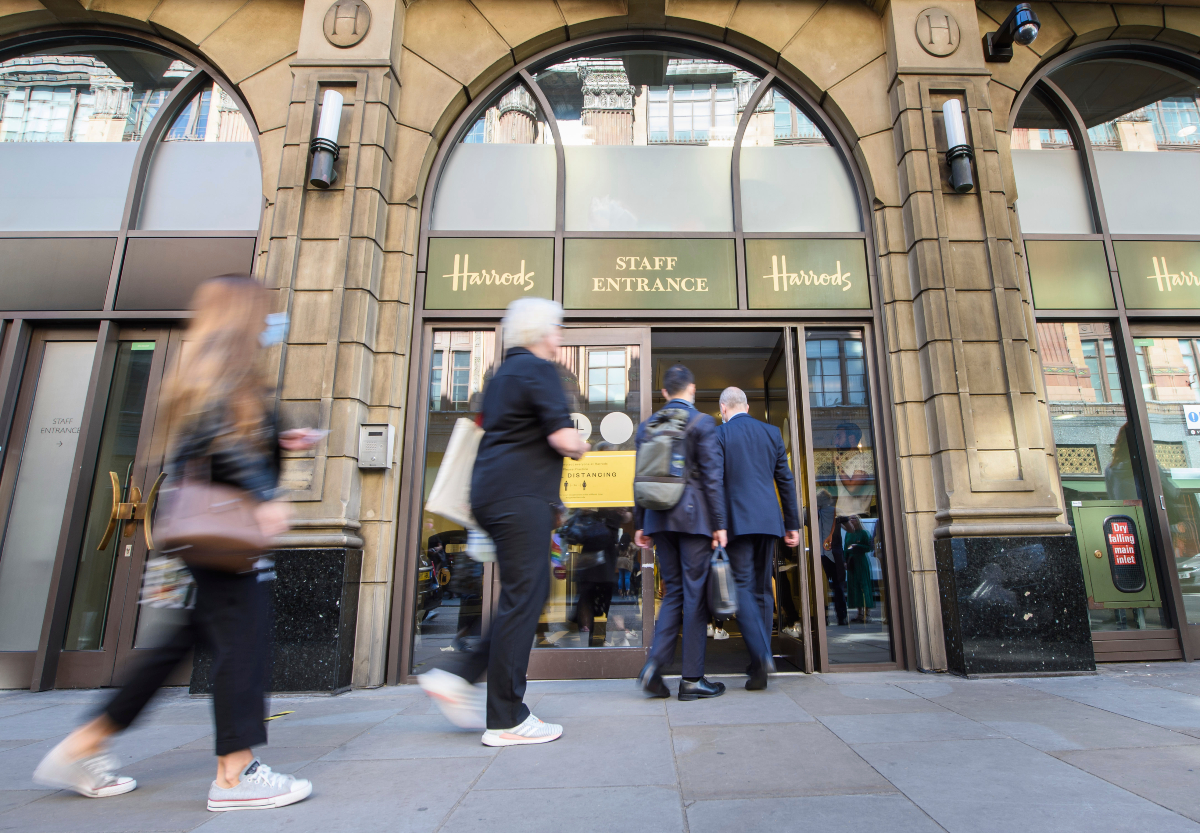 When questioned about farmed fox fur during a “secret shopper” filming, the sales representative for Yves Salomon claimed that foxes on fur farms are not kept in cages but in “their own private space” in “separate rooms” “exactly” like Battersea Dogs and Cats Home, an animal-rescue center in London, where “they have enough space to play and everything.” Another Yves Salomon sales assistant at Harrods assured an undercover shopper that animals are “put down with an injection” so that “they are literally put to sleep” before they are killed. When the shopper expressed concerns about videos she had seen of animals being electrocuted without anesthetic, she was told, “It’s only propaganda, madam.”

Despite the unlawful nature of breeding foxes for human consumption in the United Kingdom, a Moncler sales assistant told an undercover shopper that its Finnish fox fur was just a by-product “from animals who were already taken for other purposes, like for example meat or something else.” A sales representative for Max Mara told an investigator that its fur is certified by Saga Furs, meaning “those ones are not cruel, not made in a cruel way…it means that the animals don’t suffer.”

“It’s hardly a surprise that staff in Harrods don’t want to describe the grim reality of life for animals on fur farms, because it would surely leave their customers horrified,” Bass said. “The week before speaking to five Harrods’ sales assistants who all creatively cloaked the cruelty of the fur trade, I visited several supposedly ‘high welfare’ Finnish fur farms and come face to face with the abject misery and suffering of thousands of foxes locked up in barren meter-squared battery cages their whole lives. Before Christmas they will all have been killed by anal electrocution, and the luxury lies of fur trade PR spin will market their lifeless fur to consumers.”

Harrods, Max Mara, Moncler and Yves Salomon did not respond to requests for comment.

The controversy has led an increasing number of brands and retailers to ditch fur at a pace that has been growing exponentially, which Ross from Saga Furs calls a “big disappointment” even though overall fur sales haven’t taken a hit, since business in China and Russia, two of the biggest fur markets, is still booming. “I think that several of the brands that I’ve worked with closely made decisions based upon activists, based upon pressure [and] not based upon science,” he said. “But when one door closes, another one opens. At the bottom line, fur is responsible luxury [and] a profit center for many of brands. We don’t believe that it’s going away.”

Since March, companies that announced plans to stop or phase out their use of fur this year include Canada Goose, Saks Fifth Avenue, Mackage, Mytheresa, Neiman Marcus, Oscar de la Renta, Valentino and Kering, the French conglomerate that owns rarified labels such as Alexander McQueen, Balenciaga, Gucci and Yves Saint Laurent.

“For many years, Kering has sought to take the lead in sustainability, guided by a vision of luxury that is inseparable from the very highest environmental and social values and standards,” François-Henri Pinault, Kering’s chairman and CEO, said in September. “The time has now come to take a further step forward by ending the use of fur in all our collections. The world has changed, along with our clients, and luxury naturally needs to adapt to that.”

Momentum is building on a bigger scale, too. Earlier this summer, Israel became the first country in the world to outlaw fur sales. In August, Ann Arbor in Michigan became the seventh municipality in the United States—and the third outside California after Wellesley and Weston in Massachusetts—to do the same.

“The fur industry causes the deaths of hundreds of millions of animals worldwide, and inflicts indescribable cruelty and suffering,” Israeli environmental protection minister Gila Gamliel said after signing the regulation into law in June. “Using the skin and fur of wildlife for the fashion industry is immoral and is certainly unnecessary. Animal fur coats cannot cover the brutal murder industry that makes them.”