Amazon appears to be pulling out all the stops in its ongoing battle with employees attempting to unionize, while the company is now operating same-day delivery for retailers including Pacsun and forging ahead on new real estate investments.

A recent Recode report reveals how the e-commerce giant is looking to quell ongoing labor strife. In particular, the report details how Amazon strategized to befriend allies of its critics in an effort to “neutralize” its detractors and launch feel-good initiatives to convert the media and local politicians into company boosters.

The internal May 2021 memo laid out two main goals: establish and deepen “relationships with key policymakers and community stakeholders” and improve “Amazon’s overall brand,” according to documents seen by Recode.

Since the memo’s internal circulation, Amazon has seen the successful unionization of a Staten Island, N.Y. warehouse called “JFK8,” marking an historic first for company employees. Other union elections at a second Staten Island warehouse and a Bessemer, Ala. facility failed to get enough votes to organize, with the Alabama location’s results still in the balance amid objections from The Retail, Wholesale and Department Store Union (RWDSU).

Still, workers are taking note. In the first six months of fiscal 2022, the National Labor Relations Board (NLRB) saw a 57 percent year-on-year increase in the number of union filings.

Amazon called the engagement strategy laid out in the memo particularly important at a time when the International Brotherhood of Teamsters (IBT) was gearing up to back these efforts throughout the U.S.

In June 2021, the Teamsters Union voted in favor of The Amazon Project, a resolution to scale up efforts to organize Amazon workers. The union, which represents 1.4 million workers across trucking, warehousing and other logistics industries, created a dedicated Amazon division to help the company’s warehouse workers and delivery drivers organize and demand better working conditions.

“The Teamsters are intent on disrupting Amazon’s network until they get to a point where they surrender,” Teamsters general president Sean O’Brien said in a statement. “I love the fact that we are [occupying] space in their head. They should know we are coming.”

O’Brien initially told Recode in July 2020 that the organization wants to keep pressuring Amazon until it stops resisting workers’ unionization efforts. One of the Teamsters’ main issues with Amazon’s employment model is that, for most of its front-line workers, “there’s no means to an end to a full-time career,” O’Brien said.

Amazon has faced increased scrutiny and worker activism in recent years amid reports of harsh working conditions and higher-than-average injury rates. The firm is being investigated by The Occupational Safety and Health Administration (OSHA) after an employee died at a New Jersey warehouse last month.

Recode said the memo proposed that Amazon should create and foster partnerships with local non-profits and community organizations that company officials hoped would “provide political cover for local policymakers, neutralize organized labors’ attempts to grow their coalition of third-party validators and spokespeople, and provide a platform for Amazon spokespeople and allies to speak of the true economic and social impact of Amazon in Southern California.”

Additionally, the report indicated that Amazon was intentionally seeking partnerships with some organizations that work closely with its opposition. Those included organizations dedicated to helping incarcerated people find stable work upon reentry into society, such as the Anti-Recidivism Coalition, Homeboy Industries and Defy Ventures, all named in the memo.

Amazon defended its main goals highlighted in the memo, and didn’t deny any of the anecdotes presented.

“As a business that delivers to neighborhoods across America, we work hard to strengthen our connections in the communities we serve,” said Paul Flaningan, Amazon spokesperson, in a statement provided to Sourcing Journal. “We’re constantly exploring ways we can improve for our employees, our customers and our community partners. That includes employees at all levels of the organization developing documents, engaging in planning sessions and discussing different ideas—some of which get enacted, some of which don’t. Preparing for many different possible scenarios enables us to respond quickly to shifting business demands and external factors, and one document should not be interpreted as a strategy or position.”

The memo included a mock press release of a partnership between Amazon and an unidentified local organization in Southern California. The release was designed to brainstorm common internal questions such as “How does this improve our corporate reputation?” and provide answers to them.

In this such example, the mock release offered the response: “By creating a pipeline of workers who would immediately benefit from our benefits compared to other peers in the region, we are creating spokespeople that can improve our reputation, while helping our communities most vulnerable.”

Internal team members also posed the question, “How will this earn Amazon political capital, in regions where we are facing unionization efforts?”

“Much of Amazon’s opposition is aligned with policies and organizations who support social justice work and criminal justice reform like we’re suggesting here,” the answer stated. “Many former offenders do not qualify for federal benefits that could improve their lives and provide stability post incarceration. This allows Amazon to highlight our benefits offerings while creating safer, thriving communities.”

The memo indicated that Amazon would likely need to alter its drug-screening practices for prospective employees if the company wanted to develop such an initiative. Just one month after the memo was distributed internally, Amazon revealed that it would no longer test most job candidates for marijuana.

While the memo largely proposes strategies and partnerships in Southern California, the Recode report suggested that this roadmap could be replicated elsewhere in the country, particularly as the unionization pressure gains traction in major cities like New York and Chicago.

In July, Amazon Labor Union (ALU), the union behind the victory at the Staten Island warehouse, agreed to provide organizing and financial assistance for workers trying to unionize warehouses in Albany, N.Y. and Campbellsville, Ky. Both will affiliate as formal chapters of the union, according to ALU president Christian Smalls. 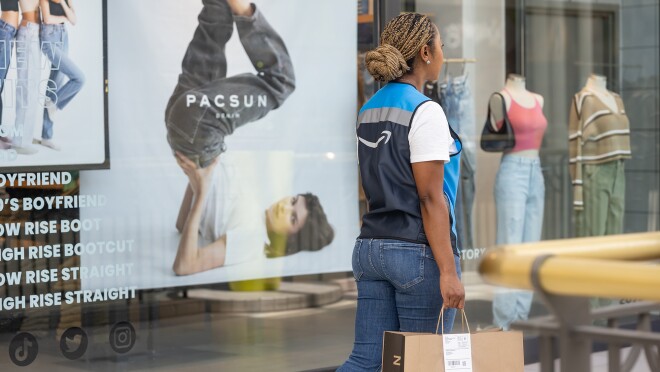 Some stores will also offer the option for shoppers to pick up the products in-store. The service is free for U.S. Prime members who spend $25 or more on qualifying items and $2.99 for members who spend below $25. Additional retailers joining the service in upcoming months include Sur La Table and 100% Pure. Orders are fulfilled from retailers’ in-store inventory.

Amazon plans to expand to additional retailers and cities around the country in the months ahead, the company said in a blog post.

“The expansion of Amazon’s Same-Day Delivery to include beloved brands delivered directly from nearby retail locations is just another way we are offering customers even greater selection, at faster speeds,” said Sarah Mathew, director of Amazon Delivery Experience. “We are excited to see this new model come to life and look forward to adding more brands, stores, and locations to the program.”

While unionization appears to be an evergreen concern for Amazon now, the e-commerce giant is also reshuffling its warehousing deck, with reports from Bloomberg indicating that the company wants to sublease as much as 10 million square feet of warehouse space. The report also raised the possibility of the company walking away entirely from some leases, although Amazon wouldn’t confirm that it was considering lease terminations.

A recent report from the Wall Street Journal said that Amazon recently won local approval to build a five-story, 3.1 million-square-foot distribution center in western New York, and has even bigger sites in the works in Southern California and Colorado.

The approval of the $550 million warehouse by the Niagara, N.Y. planning board makes the site one of the first new Amazon distribution projects to move forward since the company said it was rethinking its logistics network. Amazon plans to employ about 1,000 people at the warehouse, which will also include 1,500 robots per floor.

Amazon’s decisions largely have to do with overcapacity, which accelerated significantly during the Covid-19 pandemic, when Amazon says it nearly doubled its logistics and fulfillment network. The company’s total warehouse space jumped from 165 million square feet pre-pandemic to 379 million square feet by May 2022, according to data from MWPVL International Inc., a Canadian supply-chain consulting firm.

Overall, Amazon has canceled, closed, listed for sublease or put on hold more than 25 delivery stations and fulfillment centers across the U.S. in 2022, according to MWPVL data. Another 15 facilities have since delayed their opening.

Despite the delays and closures earlier in the year, MWPVL estimates that Amazon will open 250 more facilities in 2022, including 21 multi-story fulfillment centers.

The company is forging ahead with a 4.1 million-square-foot, five-story facility under construction in Ontario, Calif., and a 3.9 million-square-foot, five-story project in Loveland, Colo. With these projects still moving forward, it appears the pause in logistics expansion is targeted at specific types of facilities, while the broader efforts to build up capabilities are still under way.