Fashion for differently abled individuals has come a long way in the three decades since landmark legislation strengthened disability rights.

The Americans with Disabilities Act (ADA) of 1990, which outlawed discrimination against citizens with mental or physical medical conditions, turned 30 years old this week. The watershed law barred employers and prospective employers from refusing jobs, training and other employment benefits to candidates otherwise suited to positions based on their disability status.

Since the ruling took effect, awareness surrounding these issues has surged. Workplaces and public spaces have been retrofitted to become more accessible to all employees and patrons, and representation of people with disabilities within the pop culture sphere has increased dramatically. But in supporting Americans with disabilities, has fashion held up its end of the bargain?

What brands are doing

The concept of clothing built to suit the unique needs of shoppers with disabilities, now known as adaptive apparel, began to take root long after the passage of the ADA. Only in recent years have brands begun tackling the challenge head on, and now even mass-market chains like Target offer robust adaptive apparel options  for kids.

One such label seriously investing in this growing area of fashion is Tommy Hilfiger, which made its foray into adaptive apparel in 2016. According to Gary Sheinbaum, CEO of Tommy Hilfiger Americas, the company decided to partner with the Runway of Dreams Foundation four years ago on a children’s line.

“We realized that the fashion industry had largely overlooked people with disabilities,” Sheinbaum said of the label’s work with the non-profit dedicated to promoting inclusion and opportunity for the disabled community in the fashion industry. “There was a huge white space for stylish adaptive clothing.”

According to Sheinbaum, the Tommy Hilfiger brand was founded on the idea of democratizing fashion for the masses, so creating adaptive clothing for people with disabilities felt like a natural—and necessary—evolution. “Our kids’ collection marked the first time a global lifestyle brand modified its mainstream apparel into adaptive clothing, and in 2017, we expanded the collection to include a line for adults,” he said.

Styles for men, women and kids include discreet innovations like magnetic and Velcro flies to replace zippers and buttons, and strategically placed closures that allow wearers to get dressed with ease.

The brand recently launched Tommy Adaptive in Japan, Europe, and Australia, Sheinbaum said. “We are thrilled by the great consumer response,” he added, noting plans to grow, innovate and expand the line over time. “We hope to inspire other companies and industries to create their own adaptive products, as the change doesn’t stop with us.”

Change is imminent across the industry, according to Dana Zumbo, who heads up business development for Zappos Adaptive, which made its debut in 2017.

“Over the last three years since Zappos Adaptive launched, we have seen more awareness in general as it relates to inclusion in the fashion industry,” Zumbo said. “We have had the opportunity for more conversations with our brand partners about the importance of inclusive design, which will create more accessible products for everyone.”

According to Zumbo, Zappos’ customer service team has been inundated with queries about buying single shoes, or pairs containing two different sizes. In March of last year, the company posted a survey on its Facebook channel to gauge interest and better understand shoppers’ needs.

“From the initial survey, people shared so many reasons for needing a single or two different size shoes,” Zumbo said, including having had a limb amputated, or wearing a brace or prosthetic that would require a larger size on one side. The overwhelming response led to the creation of the Single & Different Size Shoes test program, which launched on July 14.

Zappos Adaptive partnered with comedian and Para-athlete Josh Sundquist on the launch. “As an amputee, I’ve never been able to buy a single shoe before, so this is a game-changing moment for amputees and people with disabilities,” Sundquist said in a statement.

The program’s debut will serve to prove the concept as Zappos Adaptive considers expanding to include more brand partners. Upon launch, Nike, Billy Footwear, Converse, Stride Rite, Plae, and New Balance made up the roster of labels contributing multiple styles and full size-runs.

The program offers single shoe options ranging from toddler to adult sizes in medium to extra, extra wide widths, with options retailing between $17.50-$85.

Since the program launched two weeks ago, Zappos Adaptive has already fielded multiple requests from brands looking to take part. “The ultimate goal would be to have our brands sell us single shoes so we could offer more of a selection across the board to everyone,” Zumbo said. The team is also working to launch new brands and collections across categories over the next year.

Removable insoles allow for depth adjustment, while extra-wide widths and longer straps and laces help make room for medical devices. Stride Rite said it surveyed more than 1,000 orthotic wearers and and worked with healthcare providers, parents and fit specialists in the creation of the shoe, which is made for kids and toddlers.

The future of adaptive apparel

The industry’s appetite for adaptive apparel options has led to a rise in talent looking to specialize in their creation. According to Deborah Beard, associate chair of the technical design program at the Fashion Institute of Technology (FIT) in New York, fashion students are taking it upon themselves to develop the next generation of clothing for people with disabilities.

FIT’s technical design program teaches students the practical side of clothing design, from patternmaking, to grading, fit and production. Most spend two years studying fashion or textiles before taking on the course load.

Adaptive apparel classes offered through the program have become a true hotbed of innovation, where students pull from their own experiences or those of loved ones to inform their designs. “Sometimes they’re inspired by family members who have struggled with illnesses and injuries, as well as disabilities,” Beard said.

Adaptive apparel training generally takes place toward the end their studies, and every year the final exhibition, known as the “Capstone,” features the students’ most groundbreaking technical designs.

“For the Capstone, it has to be something new and different that they invent, or make better, than what’s already out there on the market,” Beard said. Many designs are technology driven, incorporating wearables, or made with technical fabrics that respond to a wearer’s body.

Beard referenced a student who had infused a fabric with lavender oil when building a garment for her dancer sister who suffered from rheumatoid arthritis. The essential oil is known to help with the joint pain, she said.

The school was scheduled to have an adaptive clothing fashion show and forum to showcase the latest innovations, but it has been postponed due to the COVID crisis. “It’s a big area—it’s a big thing that people are missing,” Beard said. “There aren’t enough places to go for adaptive clothing.”

According to Beard, the current apparel market has placed the onus on shoppers with disabilities to find and alter clothing to suit their needs. That’s something she hopes will change with each class of graduates from the technical design program.

Student Elena Maris told Sourcing Journal that she sought out the program after a career in accounting, hoping to develop designs that could improve their wearers’ quality of life.

“I started by analyzing our most basic, daily habits and their outcomes,” said Maris, who was inspired by personal experiences in office environments, contending with the always-too-cold conference rooms and uncomfortable desk chairs. Back pain and muscle tension can heighten stress levels, she added. “This is when I realized the one solution to help us solve the two most harmful conditions to our own health—pain and stress—was to further develop the use of wearable technology in ready-to-wear garments.”

Maris designed a dress as her Capstone project that incorporated thermotherapy through a heating panel placed between two layers of compression fabrics. The technology works to boost blood flow, helping oxygen travel to joints and muscles and reducing inflammation. A removable, electrotherapy-infused back panel on the dress also provides low-voltage electric currents to treat nerve pain, while gentle electrical pulses can provide a massaging sensation, controllable via smartphone apps. 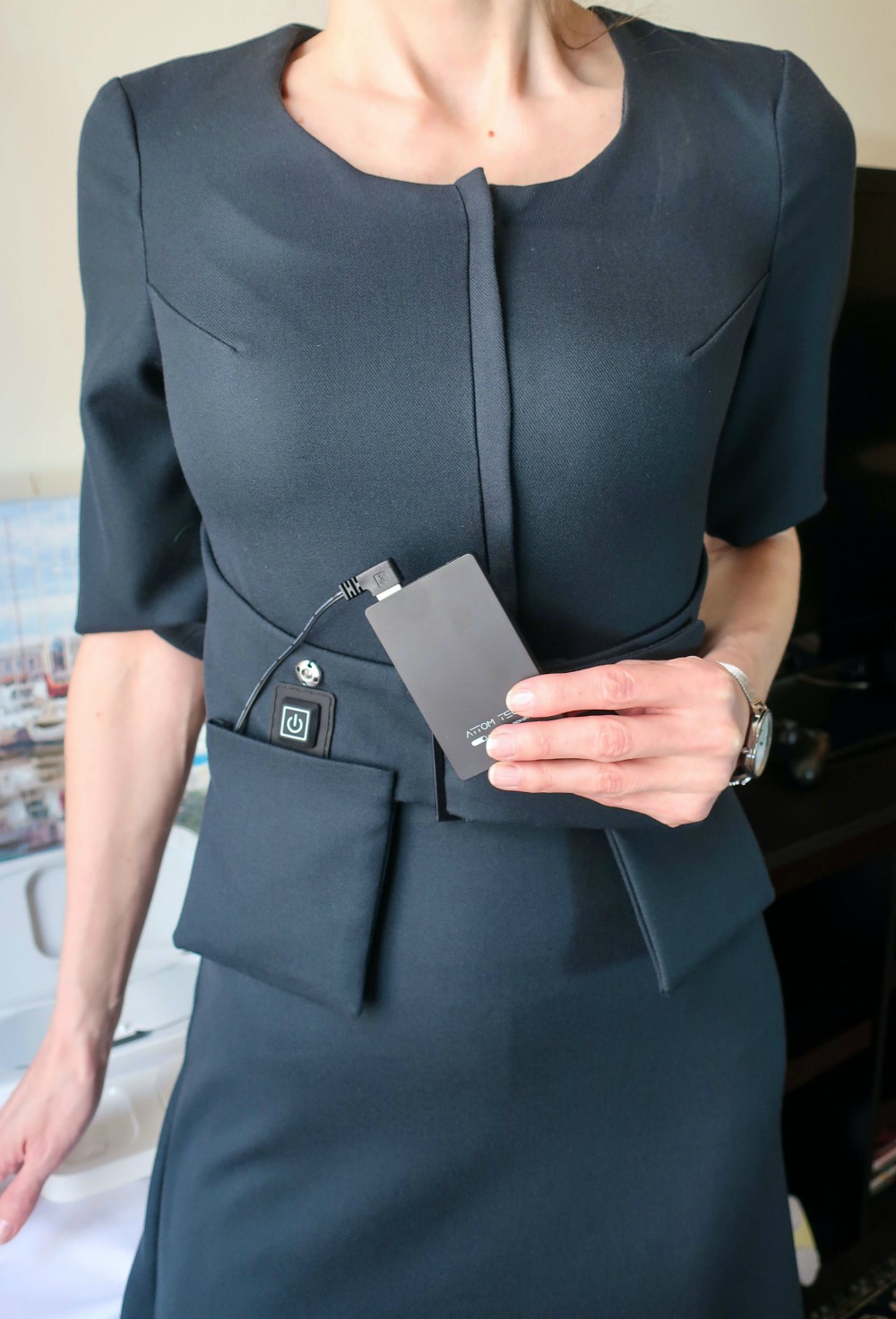 “We see an increase in the use of smart, innovative fabrics but designers have yet to create compelling apparel to meet the needs of the customer with a disability or those looking to improve their health,” Maris said. “Today, the ideal balance between fashion and function remains largely uncovered but we see more companies welcoming the idea of creating collections with a meaning and true purpose.”

Emmanuela Saint Fleur was inspired to develop a smart jacket for her autistic nephew after a harrowing experience when the boy wandered away from home. “Due to his autism, he is very conscious of leaving his personal items behind,” Saint Fleur said, “so my solution was to create a personal item that he could wear so we could find him easily.”

Inside her jacket’s collar, Saint Fleur installed and activated a Tile tracking device that pairs with a smartphone app. “The Tile tracks the location of the item at all times, so my phone is constantly sending me messages about the location of the jacket,” she said, which helps reduce family members’ stress by narrowing down search locations. “Fashion-wise, my jacket comes with two sets of sleeves,” she said, which can be interchanged depending on the weather and climate. One set is made of lightweight twill, while the second set is made with a cozy fleece for colder temperatures. The garment can also be worn as a vest, she added. 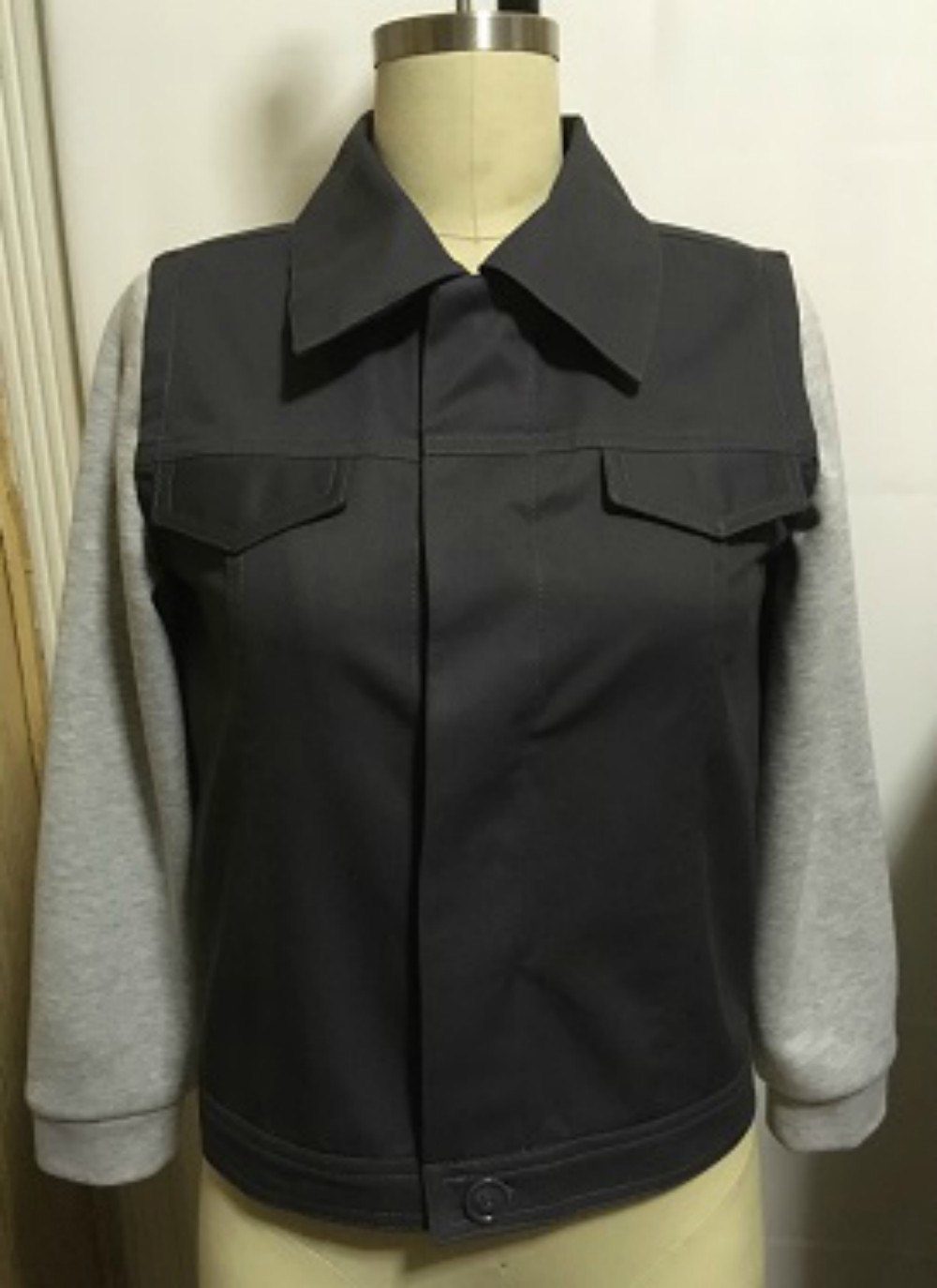 When asked what the future of adaptive apparel holds, Saint Fleur said she is hopeful that more brands and retailers will prioritize innovation, as the industry is duty bound to become more socially conscious.

“As a society, we are faced with so many life challenges, and we are constantly looking for ways to improve our lives,” she said. “Whether it is through practicability, functionality, sustainability, or technology, the apparel industry is becoming more innovative day by day.”