The first half of 2020 has felt nothing short of apocalyptic.

A deadly pandemic has killed hundreds of thousands across the globe. And now, despair and anger over the killing of George Floyd and countless other African-American citizens at the hands of police have brought tensions in the U.S. to a boiling point.

During what might be described in the history books as the longest six months of the modern era, discretionary spending has plummeted as consumers’ hearts and minds have been drawn elsewhere. In response, brands have struggled to toe the line between providing solace and underscoring their own values.

The spread of the coronavirus prompted retailers, manufacturers and high fashion labels worldwide to pivot to producing personal protective equipment for frontline workers and consumers alike. These actions, while nothing short of honorable, also provided a palatable avenue for retail to assert its relevance.

Now, protests and riots across the nation have created a situation that is impossible to ignore. While most companies have historically backed away from issues that feel politically charged or potentially divisive, staying silent during the current moment is tantamount to admitting complicity with the societal forces that have brought the country to its knees.

So, over the past week, brands have been speaking out. And a number of them have been opening their pocketbooks, too.

Deckers Brands, which owns Ugg, Teva, Sanuk and Hoka One One, among others, has mobilized its labels to donate a total of $500,000 to groups promoting racial equality, including the NAACP, the ACLU and Black Lives Matter.

“These organizations advocate against systemic and overt racism, provide direct relief to communities of color affected by institutional racism, and provide educational resources for those learning about allyship,” Hoka One One wrote on Instagram Thursday. 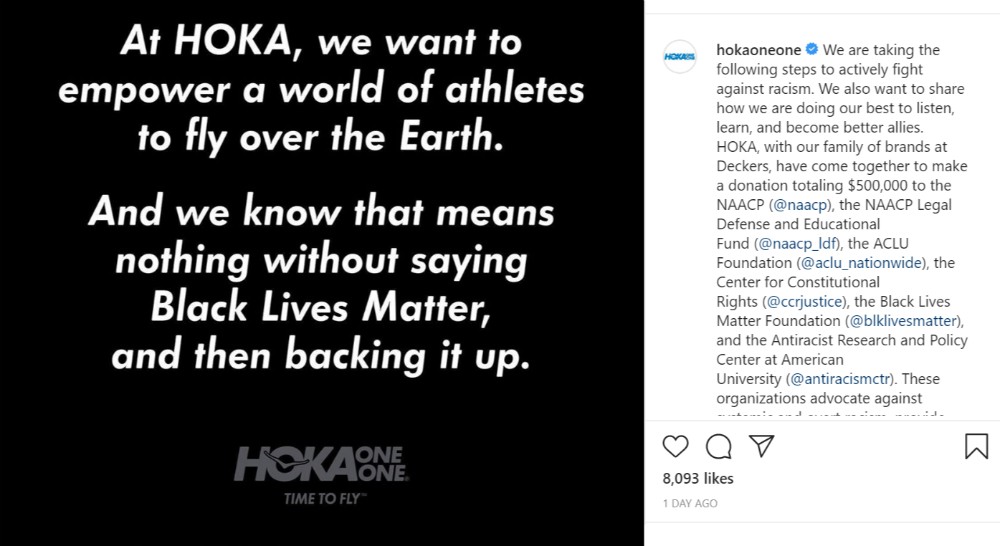 “We stand in solidarity with our Black employees, customers, and partners, and are committed to helping build a country and a world where everyone can live with dignity and free from fear,” Amazon wrote in a blog post Wednesday announcing a $10 million donation to more than 10 groups focused on “combating systemic racism.”

On Friday, Walmart committed to funneling $100 million over the course of five years into the creation of a new center promoting racial equality. The company will recruit African Americans in higher numbers, and will work to develop and support black team members inside the company, CEO Doug McMillon said in an email obtained by The Hill.

Captioning a simple message on Instagram (‘Let’s change’), H&M Group said it would donate $500,000 to the NAACP, Color of Change and ACLU. “We support these organizations in their efforts for justice, economic rights and democratic empowerment,” it wrote.

Gap Inc., which owns brands including Gap, Old Navy, Banana Republic and Athleta, will donate $250,000 to the NAACP and Embrace Race. Lululemon will donate $100,000 to the Minnesota Freedom Fund, according to an Instagram post. “We haven’t always got it right,” it wrote. “And we know that to be a stand against inequity and injustice of any kind, we all need to do so much more. You have our commitment we will.” 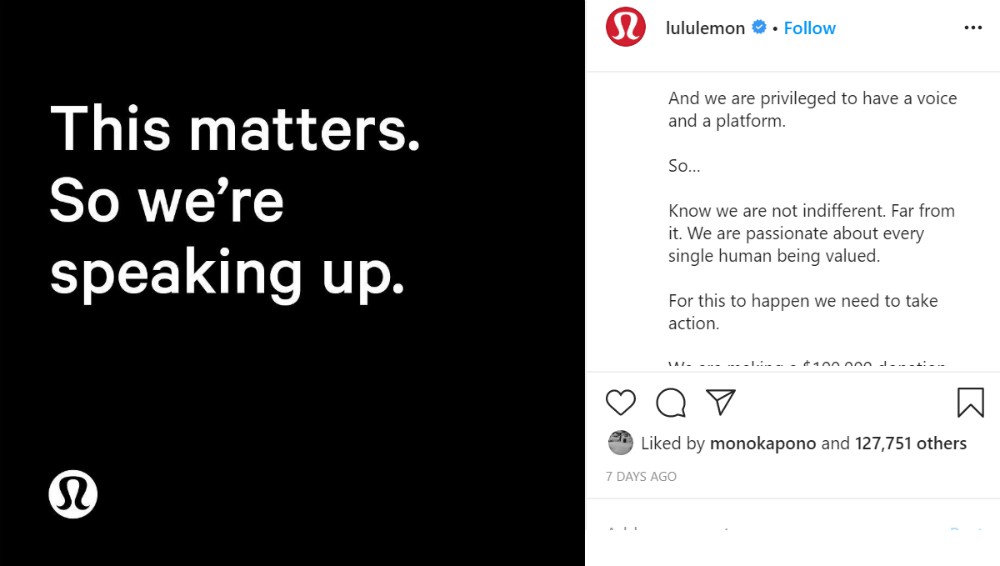 PVH Corporation CEO Manny Chirico and president Stefan Larsson pledged $100,000 to the NAACP and the National Urban League. The parent to Tommy Hilfiger and Calvin Klein has also committed to matching the charitable donations of its North American corporate staff.

Supreme wrote on Instagram Thursday that the black community has inspired and supported the brand since “day one,” and announced a $500,000 donation to Black Lives Matter, the Equal Justice Initiative, Campaign Zero and Black Futures Lab. “We stand in solidarity with the fight for justice and equality, and will continue to invest in the community,” it wrote. 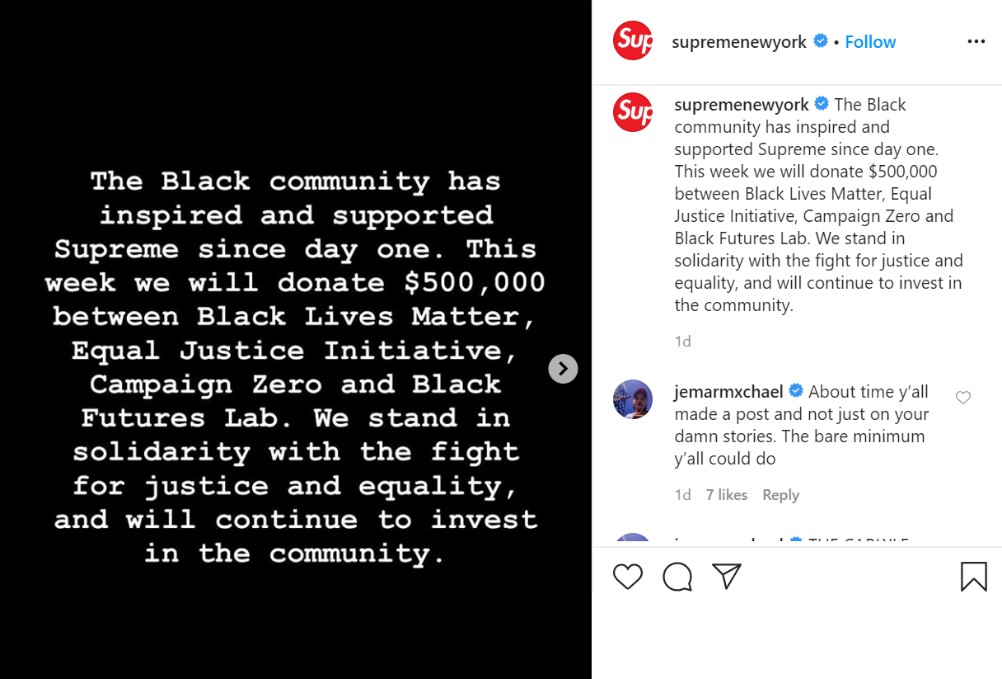 Aritzia will honor George Floyd and the African-American community through a $100,000 donation to Black Lives Matter and the NAACP, it wrote on Instagram last week.

TechStyle Group-owned Fabletics tweeted Wednesday that it has donated $150,000 to date to four organizations promoting racial equality, while Fashion Nova pledged to donate $1 million to “community resources and activism, awareness campaigns and other initiatives to help in the fight for racial equality and opportunity.” 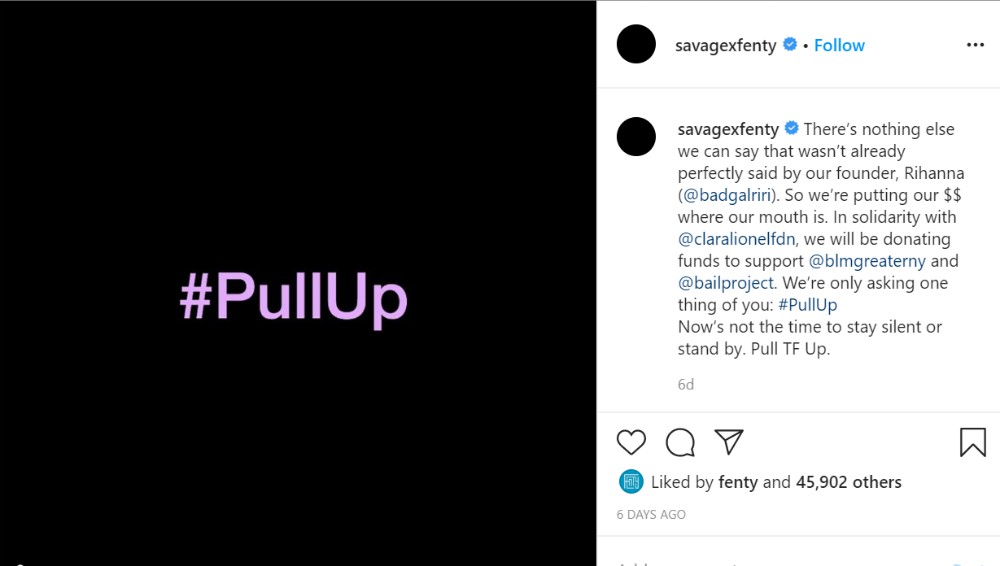 Ganni, along with its founders, pledged on Tuesday to give $100,000 to Black Lives Matter, NAACP and the ACLU.

Gucci and its parent company, Kering, which owns luxury brands like Yves Saint Laurent and Bottega Veneta, among others, have made donations in undisclosed sums to organizations such as the NAACP, Campaign Zero and the Know Your Rights Camp.

Kim Kardashian West’s shapewear brand Skims will donate an undisclosed sum to a handful of organizations fighting racial injustice. “’We stand in solidarity with the fight against systemic racism and are committed to supporting and participating in the shift hat needs to take place,” she wrote on Instagram.

Spanx will donate $100,000 to Black Lives Matter, the NAACP, and The Minnesota Freedom Fund, it wrote on Instagram, has also committed to donating $100,000 to local organizations in its Atlanta hometown. “To be an ally is to speak out against injustice and to be ears to listen to the POC experience,” it wrote.

Joybees launched a charitable initiative on Monday benefiting The Conscious Kid’s Anti-Racist Children’s Books Education Fund. From June 8-12, customers can opt to donate 10 percent of their purchase on every pair of shoes to the organization, which aims to promote books that educate kids on racial equality.

“Black lives matter. This isn’t a controversial statement,” Jordan Brands and Nike stated jointly on Friday. “Until the ingrained racism that allows our country’s institutions to fail is completely eradicated, we will remain committed to protecting and improving the lives of Black people.”

The groups announced a plan to donate $100 million over the course of the next 10 years to organizations ensuring racial equality, social justice and access to education.

While many brands have been met with praise and supportive emojis as they announced these efforts, others have become embroiled in controversy due to well-meaning, yet seemingly tone-deaf, miscalculations.

Prior to its donation announcement, Nike jumped out ahead of the pack with an ad on May 29 that remixed its famous tagline. “For once, Don’t Do It,” the read. “Don’t pretend there’s not a problem in America.”

While the spot featured vague calls for Nike fans to stand up to racism, it failed to address its own responsibility in leading the charge. The ad ended with the plea, “Let’s all be part of the change,” without offering a concrete strategy.

“Systemic racism is a serious issue, but a 30-second spot during The Masked Singer doesn’t prove you are serious about systemic racism,” Scott Galloway, professor of marketing at NYU’s Stearn School of Business, wrote in his weekly email newsletter.

Galloway believes the move was a cynical one, designed to pull at the heartstrings of Nike’s consumers. While African Americans account for just 13 percent of the overall population, they represent 18 percent of Nike’s market share, according to data obtained by TMZ from a source close to the company’s marketing operations.

“Most of Nike’s consumers are under the age of 35, live outside the U.S., and are willing to spend $200 on Vapormax Flyknit shoes,” Galloway said. “This is Latin for progressives.”

That’s why the company chose Colin Kaepernick, the NFL star who famously knelt during the national anthem, to front a 2018 ad campaign and subsequent collaborations, Galloway said. While the former San Francisco 49ers player earned the ire of many for his quiet protest of racism and police brutality, Galloway believes Nike’s decision to support him was not a leap of faith or a show of solidarity, but a “genius, shareholder-driven move.”

Adidas has been met with an employee uprising following its own public response to escalating tensions across the country. The brand posted an anti-racism graphic on its Instagram last week—along with retweeting Nike’s ad. 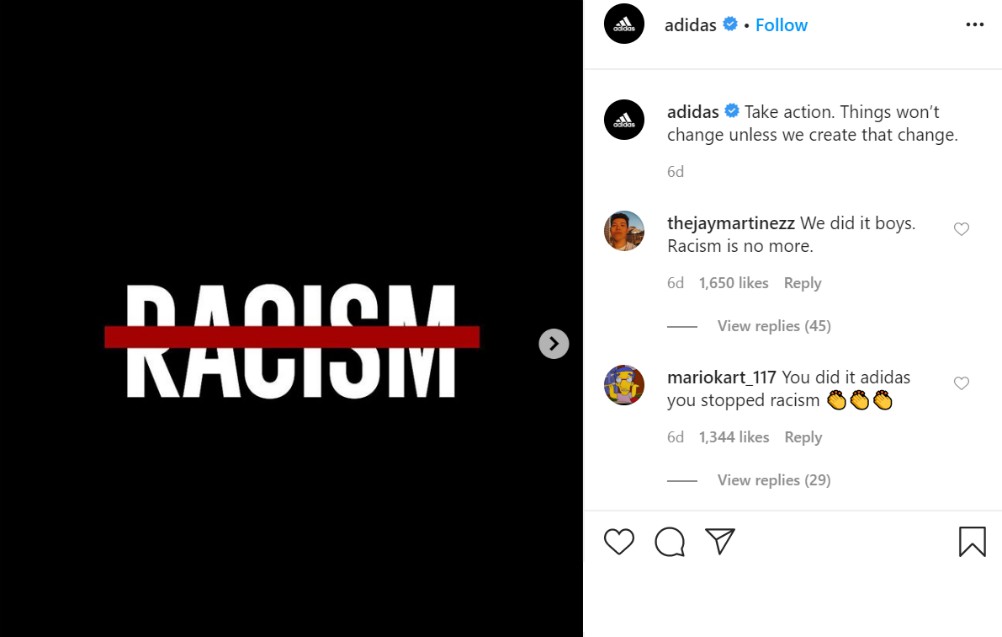 Inside the company, employees began to mobilize to take on leadership about its hiring practices in the U.S. and at headquarters in Germany. In a memo obtained by Footwear News, Julia Bond, an assistant designer for Adidas Originals apparel, wrote on Wednesday, “My existence at this brand is praised as diversity and inclusion, but when I look around, I see no one above or around that looks like me.”

“I can no longer stand for Adidas’ consistent complacency in taking active steps against a racist work environment. This is not business as usual,” she added.

A group of 150 Adidas employees has now mobilized, the publication reported, and is represented by a 13-member coalition pushing for company-wide change. The group reportedly sent a 32-page deck to Adidas North America management, pushing them to invest in black employees, the black community and racial justice, and to take accountability for Adidas’ actions.

The company has committed to matching 200 percent of all employee contributions to anti-racism groups through its donation platform, DEED. Adidas told Sourcing Journal that all leaders in North America and its global headquarters attended educational sessions “to understand and learn how to lead through this crisis.”

“We have communicated with our employees to listen and understand and respect the range of emotions we are all going through and have provided support and resources,” Adidas said in a statement, noting it is close to finalizing its commitments “to ensure our people, most importantly our Black employees, are heard, supported and involved in solutions.”

Those promises will be shared first with employees, and then with the public, later this week.

Adidas-owned Reebok has taken its own stand, cutting ties with CrossFit following an insensitive tweet by founding CEO Greg Glassman. Responding to a tweet calling racism a public health issue, Glassman tweeted, “It’s FLOYD-19,” prompting backlash from fans and a rash of canceled contracts with spokespersons and partners.

Creating racial parity in the workplace is far easier said than done, but those that make meaningful commitments can make progress, according to senior lecturer at Harvard Business School Mark R. Kramer, who co-founded global social-impact consulting firm FSG.

In an op-ed in the Harvard Business Review, Kramer outlined 10 commitments that brands can make today. “Corporate America and the Business Roundtable have an obligation to go beyond tweets and quotes by committing to an agenda that will advance racial equity in meaningful ways,” he said.

“I think, overall, you want to act but you’ve got to get your house in order first,” Carol Cone, founder and CEO of cause marketing consultancy Carol Cone On Purpose, said of companies that wish to do better but are struggling to chart a course forward.

Acting could be as simple as asking employees their opinions on what they can change. Those that wish to donate should turn to their workforces for inspiration. Some brands have turned to Donors Choose gift cards, she said, giving employees the autonomy to make decisions for themselves.

Companies also need to create employee resource groups, if they don’t have them already. “Let your values be your guide,” she said.