It’s not just fashion newcomers who are revamping the industry with fresh and inventive upstarts. Some of the disruption is coming from the sector’s longtime players.

Storied Los Angeles fashion designer Cynthia Vincent first made her mark in the late ‘90s and early aughts with coveted lines like St. Vincent and later, Vince and Twelfth Street by Cynthia Vincent. Her refined, feminine aesthetic and clean, flowing lines made each brand a household name for fashion-forward shoppers and celebrities alike.

But throughout the rise of her successful ventures, Vincent came to recognize a glaring blind spot in the industry she loved. The market for size-inclusive premium and luxury apparel was still—even in the 21st century—woefully underserved.

“I always knew the space would be interesting, and I had suggested doing a larger size run back in my Twelfth Street days,” Vincent said. “It never worked out monetarily, and we were beholden to retail.”

Stores refused to commit to purchasing larger sizes, Vincent said, even though the 10s and 12s would be the first to sell out anytime a collection was released. Friends and strangers frequently approached Vincent, imploring her to size up so they could buy her clothing.

After selling her brand to a private equity firm, the dearth of selection from most plus-size apparel labels left Vincent feeling shortchanged herself. After coming up empty handed when searching for an outfit for an important client meeting, she decided to channel her talents into designing for a new audience.

It's the End of the Road for Rebecca Taylor

J.Jill CEO on Getting With the Times: We Hadn't 'Done Our Customer Justice'

“I realized it was something personal to me,” she said, adding that it has always been easy for women over a size 14 to find inexpensive clothes—but not special pieces. “A woman in a certain place in her life, whether she is young or old, just wants quality clothes for a myriad of reasons.”

Vincent wanted to create a brand that provided unique styling and exquisite details that flattered her own body. “This is a complete white space in the market,” she said. “Designers do not know how to fit a woman with curves, and I know this because I’ve researched this extensively.”

Her new venture had to be upscale and sophisticated—a departure from the fast fashion that has dominated the sector. She also wanted to prioritize sustainability, as creating specialty garments helps curb some of fashion’s rampant waste problem.

Baacal was born in 2019 with these values in mind, she said. “I wanted a contemporary look to be accessible to everyone,” she said. “I coined the phrase, ‘the true majority,’ because the average American woman is a size 14-18.”

The brand’s styles scale from size 10-24, depending on the product. Vincent would like to open up the range even wider over the coming seasons. “For now, though, I want to create for the woman who has often been ignored,” she said.

Baacal, while mostly sold through its own DTC site, is also carried by Anthropologie and Saks Fifth Avenue, Vincent said, along with premium and luxury plus-size retailers 11 Honore and CoEdition.

The line is produced mostly in Los Angeles, but there is a portion of production that takes place in China, Vincent said. It was important for her to prioritize her home town in setting up her new brand.

“With Covid, it’s probably 80 domestic, 20 percent overseas,” she said, adding that the split will continue to shift. “I’d like to do everything domestic, but you can’t be price competitive.”

While Vincent touts the abilities of her craftspeople in L.A. as second-to-none, she readily admits that local labor is expensive to employ. The city is also known chiefly for its skills with casual apparel like denim and athleisure, so she has had to cultivate a specialized group to craft her line’s labor-intensive designs.

Despite its challenges, Vincent believes that there’s a “definite resurgence” occurring with American clothing manufacturing, which began when the punitive tariffs on China-made goods were implemented two years ago. “There was some anticipation before that happened, but once it did happen, the volatility and not being able to count on your profit margins was a huge impetus,” she said.

“The big guys started looking at Vietnam and Cambodia,” she added, “but for smaller independents, L.A. is really where it’s at.”

Manufacturing much of her line stateside has allowed Vincent to avoid long lead times and the rising cost of labor and shipping that comes with manufacturing overseas. “Bringing [manufacturing] back is a logical step, but it requires a staff of knowledgeable staff being able to produce your goods,” she said.

L.A.-based production also affords the designer greater visibility into her supply chain—and its inputs. In an effort to augment Bacaal’s sustainability profile, Vincent sources many deadstock fabrics, buttons and trims from local mills and factories, along with vintage materials. 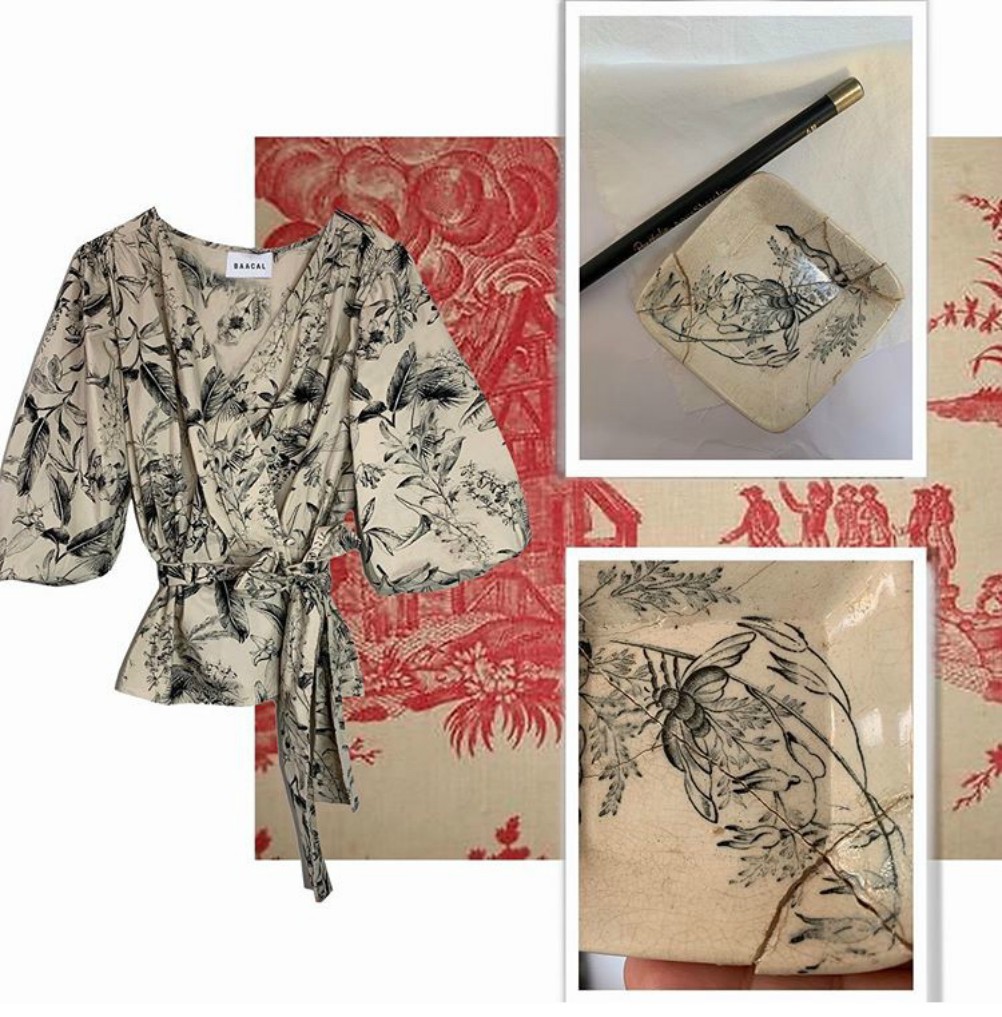 Sometimes she has issues finding new sources for fabrics once she’s exhausted her initial supply. “It requires a bit of reverse engineering,” Vincent said. “It’s challenging in that I want to make a design, but there might not be any fabric available.” She also supplements with sustainable materials like cellulosic triacetate, which is made from sustainably sourced wood pulp.

While the line has proven a hit with consumers, the coronavirus crisis knows no boundaries. Brands across the board were hit hard this spring—and Baacal, with its luxury price points and elegant styling—proved no exception.

Vincent said the company pivoted quickly to mask production, working with the City of Los Angeles to provide options for everyday consumers so that valuable medical grade equipment could be saved for front-line workers. Those efforts floated the brand through a miserable March and a much better April, but since then, sales have dipped.

Flowing dresses in vibrant hues, chic button downs, patterned shirt dresses and pussy-bow blouses are just some of the pieces that make up Baacal’s line of elevated work-to-weekend staples. The need for these garments has obviously been reduced in recent months, Vincent said, but there are certain items that will never go out of style.

“The item of the season last year was the trench coat, and that’s a basic component of any great wardrobe,” she said, adding that she will always carry trousers, white button-down shirts and biased slip dresses. “Those won’t go away.”

The casual kaftan is another item that Vincent believes is a must-have through the trials of 2020. A signature silhouette in the line, she has created one-of-a-kind pieces made from castoff materials and vintage fabrics this season. “We did a trunk show a few weeks ago and we sold out every piece,” she said.

“I think everyone should have a beautiful kaftan in their wardrobe, and wear it all the time,” she added. “You can throw it on at home, wear it if you have company, you can go out to the grocery store.”

Vincent has been confined to her home studio for the better part of two years—both as she was developing the line, and through the onset of the pandemic.

“I know that the days that you roll out of bed and don’t get dressed aren’t the same as the ones where you do,” she said. “I’m a big advocate of trading in the sweatpants one day a week, and putting on an amazing kaftan.”