New York City-based denim company Danyaki Art and Design is carving a niche in the apparel industry with its one-of-a-kind wearable art using denim as its canvas.

“Denim was my first love. It embodies Danyaki,” said Hass Kwame, Danyaki Art and Design founder and owner. “It represents coming from the ground up. It’s tough, unique and kind of abstract. You could do a lot of different things to denim and it still maintains its integrity. And when it comes to clothing, for me it’s always been about denim.”

And denim is the fabric Hass has opted to tap for his artistic endeavors, using a process called Ideation, a method he discovered in design class.

“When you first start a project, you start working in abstract, not overthinking it. That’s Ideation. I fell in love with that first stage,” he explained.

Hass says he identifies with this process because it harkens back to his childhood in his native Ghana, where he first started creating things out of necessity. “As a kid, the words ‘art’ and ‘design’ did not exist,” he recalls. “It was just about me making things I needed to play with that my parents couldn’t afford. And we had no idea they had any connection to art or design. When we didn’t have soccer jerseys, we would find different color mud, mix it with water and write the numbers of our favorite players on our back because we couldn’t afford jerseys.”

Now, Hass is borrowing from his amateur design skills as a child to embellish his denim apparel with paints and various tools, beginning in the abstract and allowing the artwork to take its natural shape on the denim surface.

In 1999, Hass got his first exposure to the denim apparel industry when he—then in his late teens—came to the U.S. and took a job as a stock boy at a Harlem men’s clothing store called Scheme.

While working at Scheme, he met and befriended up-and-coming designer Hakim Stevens. In 2002, Hass decided that he wanted to play a more active roll in the denim design market, and left Scheme to work for Stevens’ burgeoning New Jersey–based menswear denim company Omavi Clothing Co. He started at Omavi delivering samples to small stores in New York and worked his way up to assistant designer.

During this time, Hass also enrolled in art and design classes at Pratt Institute, Fashion Institute of Technology and School of Visual Arts, and began experimenting with the abstract methods and heavy use of colors he now uses in his designs, drawing inspiration from artists like Josef Albers and the Staatliches Bauhaus school in Germany. It was while at school that Hass chose denim as the surface on which to display his artwork.

In his spare time, Hass studied and analyzed the fabric very thoroughly, reading every book he found and often visiting the Diesel Denim Gallery in SoHo, a showcase of some of the brands’ finest denim goods. 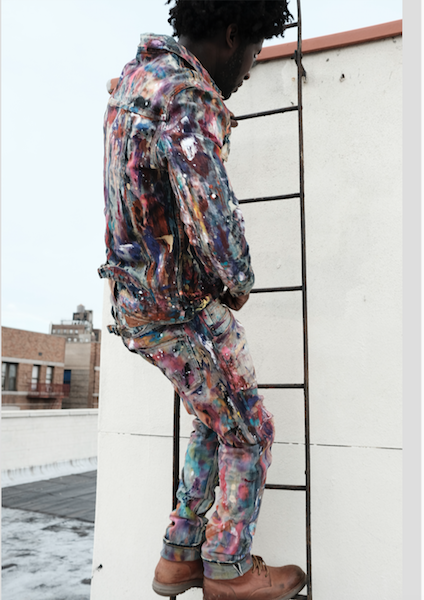 “When it comes to quality of fabrics, Diesel Denim Gallery was a heavy inspiration for me. Anybody who was a denim geek knows about that place. I couldn’t afford anything in there, but I used to go to study. It wasn’t a gallery of art; it was a gallery of denim. Being in there and touching the denim and looking at them was like therapy for me,” he said.

In 2007, Hass started his first denim label, Eyaly. But when the recession hit he was forced to fold. “If I knew back then what I know now, creatively and with all the information I have about art and design, I would have created some monsters,” he said. Now, Hass said he’s poised for success with Danyaki Art and Design.

Last April, Hass hosted a pop-up shop at Streetbird restaurant in Harlem for the company’s official launch. The pop-up was so successful customers began inquiring about where they could buy Danyaki merchandise after the event. Hass answered consumers’ demands with an online store and by creating the Tastemakers Rack, a mobile shopping experience where he greets customers and sells his goods every Saturday and Sunday, at the famed Harlem restaurant Red Rooster.

The term “tastemaker”—which Hass picked up from his professors at FIT—simply refers to a customer base. And when he began designing his collection, the word immediately came to his mind to describe someone who would wear Danyaki.

“My stuff doesn’t catch everybody’s eye,” he said. “The people with the eye to see are tastemakers. They are men, women, young, old. They are limitless. They appreciate creativity, colors and art. When their eyes see it they react differently, and they stop to look, and they buy. The rack belongs to the Tastemakers. So it became the Tastemakers Rack.”

Whether he’s creating pieces for the Tastemakers’ Rack or the online store, Hass is involved in every facet of the design and production process for all Danyaki Art and Design products, from sketching to preparing the tech packs to choosing fabric and hardware to applying the embellishments. “I work with a factory in Asia. I travel there, looking for the best selvage denim—I use mostly 14 oz. selvage denim. Once we think it’s durable and the weight is good, we test the physical product, because it’s different when it’s sewn. Then we order that fabric in bulk. Next, I send the designs and the tech packs. Once my pieces are cut and sewn, they’re shipped to me. And that’s when I go to work applying the Ideation.”

Hass is enthusiastic about Danyaki Art & Design’s future. “I want to see Danyaki exploding. I welcome any opportunity that allows me to better showcase what I’m doing to the world. The sky’s the limit.”