Macy’s iconic Herald Square flagship is among the latest and most high-profile retailers hit in a rampage by looters exploiting nationwide unrest amid protests calling for justice for George Floyd, the unarmed African-American man who died Memorial Day at the hands of a Minneapolis cop who has since been fired and charged with third-degree murder.

Largely peaceful demonstrations that sprang up in the wake of Floyd’s killing have in some instances been hijacked in recent days by a criminal element more interested in pillaging empty stores still under coronavirus lockdown than in marching for systemic social change.

Apart from the chaos at Macy’s, Manhattan’s SoHo neighborhood suffered outsize devastation. Shattered glass, toppled mannequins and shelves stripped bare were an all-too-common sight at stores like Dior, Adidas, Barbour, Chanel and a raft of top-flight brands. By Tuesday evening, the stretch of Fifth Ave. sandwiched between Madison Square Park and Union Square was transformed into a plywood corridor as Aldo, Free People, J.Crew, H&M, Banana Republic, Gap, Athleta and Zara stores retreated behind the relative safety of boarding up and battening down.

The Black Lives Matter movement has skyrocketed to the fore amid these protests, and brands across the fashion and retail landscape have waded into what can often be the treacherous minefield of weighing in on politicized social issues.

Jide Zeitlin, chairman and CEO of Tapestry, Inc., and one of retail’s few black top executives, wrote in a letter to Tapestry posted on his LinkedIn, that “this is personal.”

“We can replace our windows and handbags, but we cannot bring back George Floyd, Ahmaud Arbery, Breonna Taylor, Eric Garner, Trayvon Martin, Emmett Till, and too many others. Each of these black lives matter,” he wrote. “As brands whose core values are powerfully informed by the creative tension that cannot exist without diversity and inclusion, we cannot succeed if the ideal that is America does not succeed, including in different and diverse ways globally. We cannot attract and engage talented colleagues. We cannot design beautiful and functional products. We cannot authentically engage with consumers around the world.”

CEO Erik Nordstrom and his chief brand officer brother Pete jointly decried the “senseless deaths” of Floyd and the countless others who died during police encounters or otherwise unlawful encounters, that “reflect the deeply ingrained racial prejudice and injustice that still exists in our communities today.”

The week’s outburst, Walmart CEO Doug McMillon said, highlights “the need for us to support each other and to come together. Until we, as a nation, confront and address these hard realities, we will never achieve the best of what we can be.”

“Not enough is changing,” said Brian Cornell, CEO of Target, the Minneapolis-based retailer that first bore the brunt of an upsurge of rioting and quickly closed 33 stores, then 70, then 175.

The priority of purpose

Amid these unprecedented times—a devastating pandemic exacerbated by an historic uprising—brands must act with authenticity, said Carole Cone, CEO of Carole Cone On Purpose, which helps organizations uncover their humanistic raison d’être beyond pumping out profits. But, she cautioned, brands and retailers “should not wade into this” national conversation on race and injustice “if they haven’t walked the talk.”

Brand purpose now matters more to shoppers than cost or convenience, IBM found in a study conducted earlier this year. What’s more, one-third of consumers will quit purchasing their preferred products if a brand erodes their trust, the firm added.

“The modern-day marketplace has created a new generation of customers that come with higher demands and bigger challenges that retailers must face in 2020,” said Luq Niazi, global managing director at IBM Consumer Industries.

As evidenced by the throngs of protestors who have spilled into city streets over the past week, millions of consumers are looking to brands and retailers to respond with empathy and understanding at a time when many people have more painful questions than answers. The brands that will withstand the current two-pronged disruption must evolve, Cone said, and it will take smart management and genuine humanity to truly connect with consumers and communities reeling from recent events.

Acting with purpose is about “mattering to people” and having “meaning more than marketing,” Cone said. Fashion brands, already facing an upswell of consumer interest in planet-friendly practices, now must also consider what being good corporate citizens means to their constituency. “No matter what the design, the silhouette, the fabric, or the material—people have long memories,” Cone said of how consumers will hold brands accountable for any missteps, perceived or actual.

Purpose could be the deciding factor in the survival of the most relevant, casting mired-in-the-past brands by the wayside. Right now, amid national soul-searching, brands can start by listening to their key stakeholders—because brands that rankle their influencers and are “tone deaf to their consumers won’t be in business anymore,” Cone warned.

Businesses that will be able to rebuild and get back on their feet are going to have to “look into their souls,” she added, “and it shouldn’t just be an exercise of the senior management.”

Though Rendle pointed to VF’s executive inclusion and diversity council and employee resource groups and the Nordstrom brothers noted the retailer’s “amplified” diversity efforts, Cone says brands must go deeper to foment change and ensure pockets of their workforce aren’t left alienated and unheard. “Look at your policies, bring your employees together, and talk to each other,” she said. Brands, she added, should start a conversation on their core values and dissect whether those ethics align with “who we want to be.” 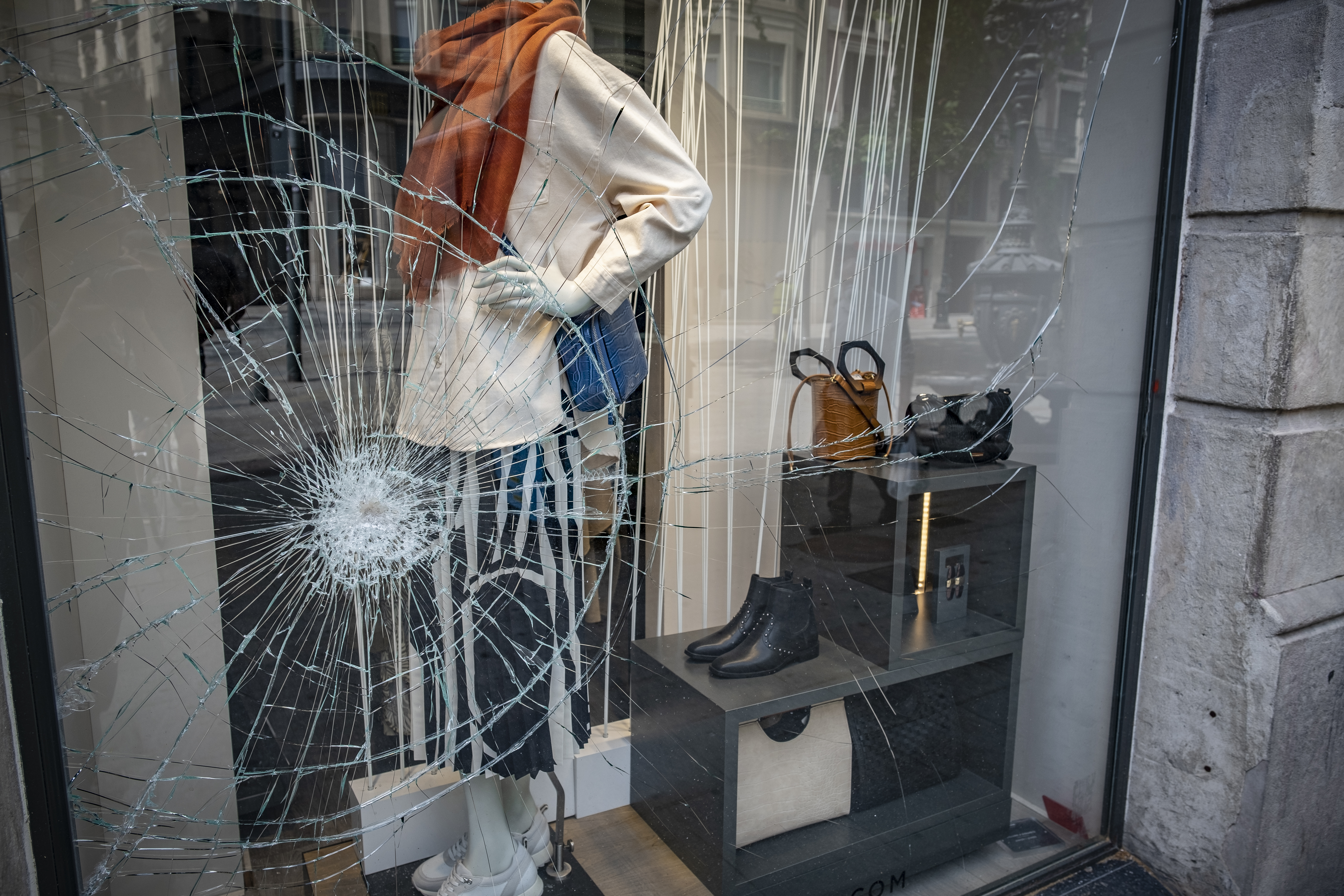 L.A. left picking up the pieces

For some, the search for purpose might have to wait until the damage done by looters has been cleaned up and carried away.

Neighborhoods across Los Angeles have mobilized to clean up the wreckage from this weekend’s riots. Retailers throughout the city were defaced, looted, and in some cases, burned to the ground as peaceful protests were overrun by opprobrious opportunists.

Following nearly four days of chaotic protests where activists and others clashed with police, Mayor Eric Garcetti called for Governor Gavin Newsom’s help in mobilizing 1,000 National Guard members to assist the police in patrolling the city.

According to Isack Fadlon, who owns sneaker and streetwear boutique Sportie LA, the street’s restaurants, salons and retailers were subject to extreme destruction, including two storefronts in the direct vicinity that were set on fire.

“We emerged relatively unscathed,” Fadlon said, adding that his storefront was marked with graffiti. “Unfortunately, not all of them fared as well as we did.

“Some will have to start from scratch and rebuild completely,” he added. “Those that were set ablaze—it will take quite some time to rebuild.”

Fadlon said he and his neighbors had been gearing up to reopen—some as early as this past weekend, as the mayor’s office issued the go-ahead for retail businesses and restaurants last week. However, the events of the past few days will set that timeline back significantly.

“After nearly three months of being closed, we were supposed to reopen this week,” Fadlon said. Sportie LA had been planning to conduct a test run of its COVID-19 safety protocols on Sunday. Then, the protests turned violent.

“It’s obviously not the right time to reopen retail,” he added. “Emotionally, people want to set their sights so they can reopen as quickly as possible, but with this COVID-19 fatigue and looting, people are now saying, ‘Let’s take it day by day.’”

The riots also made their way to nearby businesses on Fairfax Avenue and popular shopping center The Grove Saturday evening, culminating in more fires and looting.

Local cable news reporting showed the Vans store on Broadway emptied of nearly all its merchandise, windows shattered across the sidewalks. The REI store nearby suffered a similar fate, along with dozens of other retailers, restaurants, salons and jewelers in the vicinity.

The Nordstrom and Bloomingdales locations in Santa Monica sustained broken windows and looting on Sunday. In response to events across the country, Nordstrom temporarily shuttered all of its locations, releasing a statement on its website explaining the decision.

“To help keep everyone safe, we made the decision to temporarily close our stores yesterday,” the company wrote. “Some of our stores were impacted by gatherings in our cities this weekend, and we wanted to take the time to assess the damage, repair and reopen those stores so we can continue serving customers as soon as possible.”

A number of stores have already reopened across the country, the retailer told Sourcing Journal on Tuesday. Nordstrom also said it would continue to pay employees for shifts missed due to the unexpected closures.

A Bloomingdales spokesperson told Sourcing Journal that the company’s principal concern is the “safety of its colleagues and neighbors.” The department store chain experienced damage to a number of its locations, the spokesperson said, adding that it is currently assessing the impact.

By early Monday afternoon, most storefronts and restaurants throughout the Downtown Santa Monica area had been boarded up, with nearly all of the evidence of the prior evening’s pandemonium swept into garbage bags by concerned residents.