A litany of consumer complaints spurred JanSport to sue a Los Angeles wholesaler for flooding Amazon.com with the VF Corp. subsidiary’s “liquidated, used and often defective” backpacks under the guise of selling brand-new goods.

The suit, alleging false advertising and unfair competition, accuses Bravo of deliberately misleading consumers, who have the option to filter Amazon search results by the item’s condition, which are categorized as “new,” “renewed,” “used – like new or open box,” or “used – very good.” As a result, customers are left with a sour taste in their mouth—and poor opinion of JanSport—when their theoretically “new” purchase arrives in decidedly not-new shape.

The legal complaint illustrates the fallout from Bravo’s actions, with a two-out-of-five-star rating describing an order as “stained all over the front.” Yet another reviewer who gave just a three-star rating, wrote, “Gross. My son went to pack up his bag for school and inside was an old piece of gum, wrapped up in a smooshed wrapper, and a blue pen. Clearly not new and I paid way too much for this for somebody’s return. It came in a sealed plastic bag. Very disappointed.”

To another purchaser, the “very thin” backpack “felt like a JanSport knockoff.” In its response to the customer, Bravo offered to “pay $100,000.00” to anyone who could prove its offerings weren’t “authentic” JanSport goods. 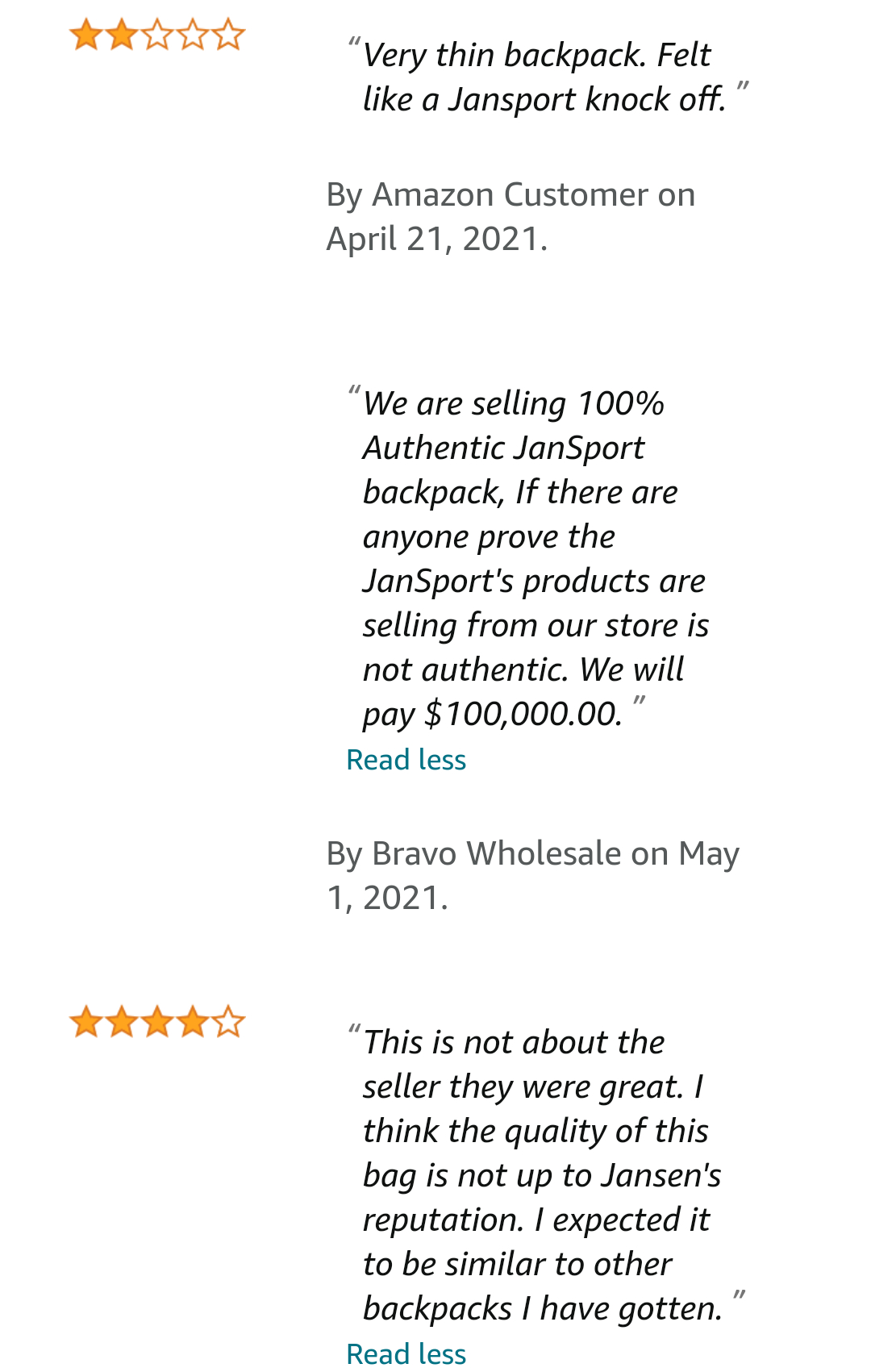 Though Amazon isn’t named in the suit, which is seeking monetary damages, the e-commerce giant has long battled trademark-infringing products on its highly trafficked site. Last year, it spent $700 million to fight fraud, according to Amazon’s 2020 Brand Protection Report, and previously established a Brand Registry, where brands and intellectual property owners can register their trademarked products, access automated protection tools that rely on machine learning to detect and even predict when counterfeits might crop up. Transparency, a serialization service, enables brands to attach codes to individual products, so end consumers can verify their authenticity. Amazon didn’t immediately respond to a request for comment.

Walmart, which similarly isn’t named in the VF brand’s suit but also sells JanSport-branded, Bravo-supplied product, recently found itself facing the wrath of Kanye West and his popular Yeezy brand, which complained to a California court that the mass merchant’s third-party platform offered knockoff Foam Runner shoes for sale. And Crocs levied a bevvy of lawsuits at brands it claims trample its intellectual property rights, after it convinced the United States International Trade Commission to investigate Skechers, Walmart and 21 other companies for trademark infringement.