The need for personal protective equipment (PPE) is growing as the coronavirus’ spread continues, and the fashion sector is stepping up to the plate to fulfill the needs of healthcare and essential workers.

Los Angeles-based manufacturer Ari Jogiel jumped into action six weeks ago when the state’s Safer at Home measures were implemented, barring non-essential businesses from remaining open and relegating many Angelenos to their homes. An entrepreneur who enjoys solving problems, Ari Jogiel, founding CEO of the eponymous full-package apparel production business, first noted the need for PPE in his own community.

“The first thing that inspired me was my mailman—he was wearing the type of mask that wasn’t meant to be worn more than once,” he said. “After that, I said, you know, I have the tools and the manpower to be able to make a perfect mask.”

Jogiel and his team spent a week learning about facial proportions and taking stock of fabric options, seeking to create a universal product that could be worn by people across industries with differently shaped anatomy.

The Vanguard mask was born, and became available for purchase on Jogiel’s own brand site. His hope from the beginning was to keep his factory operations open and his staff employed, while also outfitting those on the front lines. 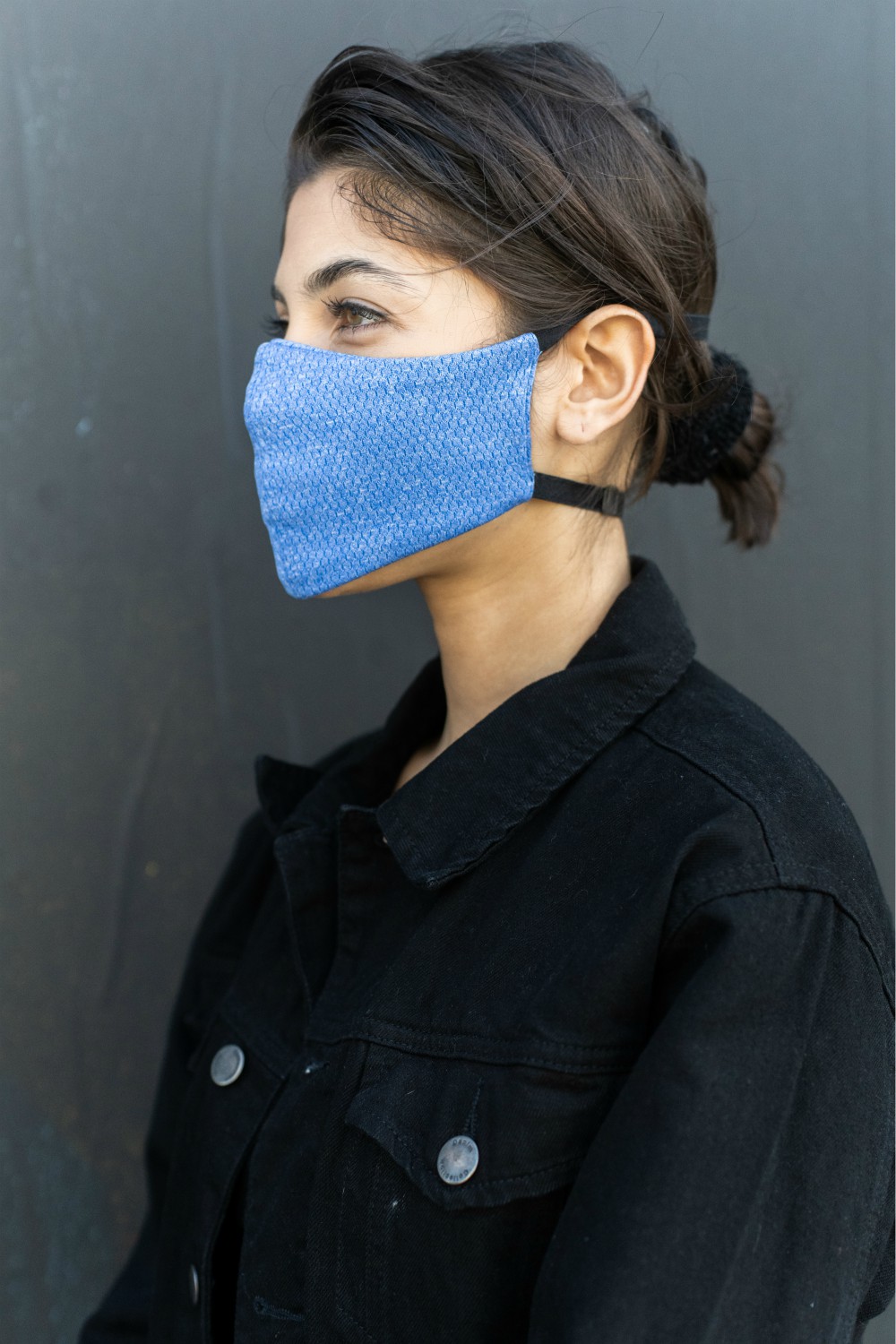 For every mask purchased, shoppers can choose to donate a mask to Cedars Sinai Medical Center, the United States Postal Service (USPS), Home Depot or the Los Angeles Fire Department. So far, the manufacturer has sent 1,500 masks to first responders, medical staff and essential workers.

Jogiel worked with an FDA consultant, along with doctors and fabric manufacturers, on the mask’s design.

“Even though it seems like a simple mask, there are a lot of variables,” he said. “When we were making the prototypes, we were trying to create the perfect mask for everyday use.”

First, Jogiel said, he sourced anti-microbial fabric for the product’s outer and inner layers. “Those two layers sandwich a filter within the mask,” he said, which is made of a cotton gauze. “It’s designed to stop as much bacteria and particles from coming into contact with the face as possible.”

“We wanted to get full coverage for the face,” he added. “It’s important that the mask go under your chin and above your nose, and that there are no openings that particles can enter through.”

Meant to last through many washes, the Vanguard mask has two adjustable straps that wrap around the wearer’s head. “It can be made as tight or as loose as needed to fit the contours of the head and face,” he said, and comes in two sizes.

In addition to providing safety gear for California’s frontline workers, Jogiel’s program has allowed his staff of 15-18 garment sewers, who were previously furloughed, to return to their posts. The business has not received CARES Act funding in the form of a PPP loan yet, though he has applied for aid. 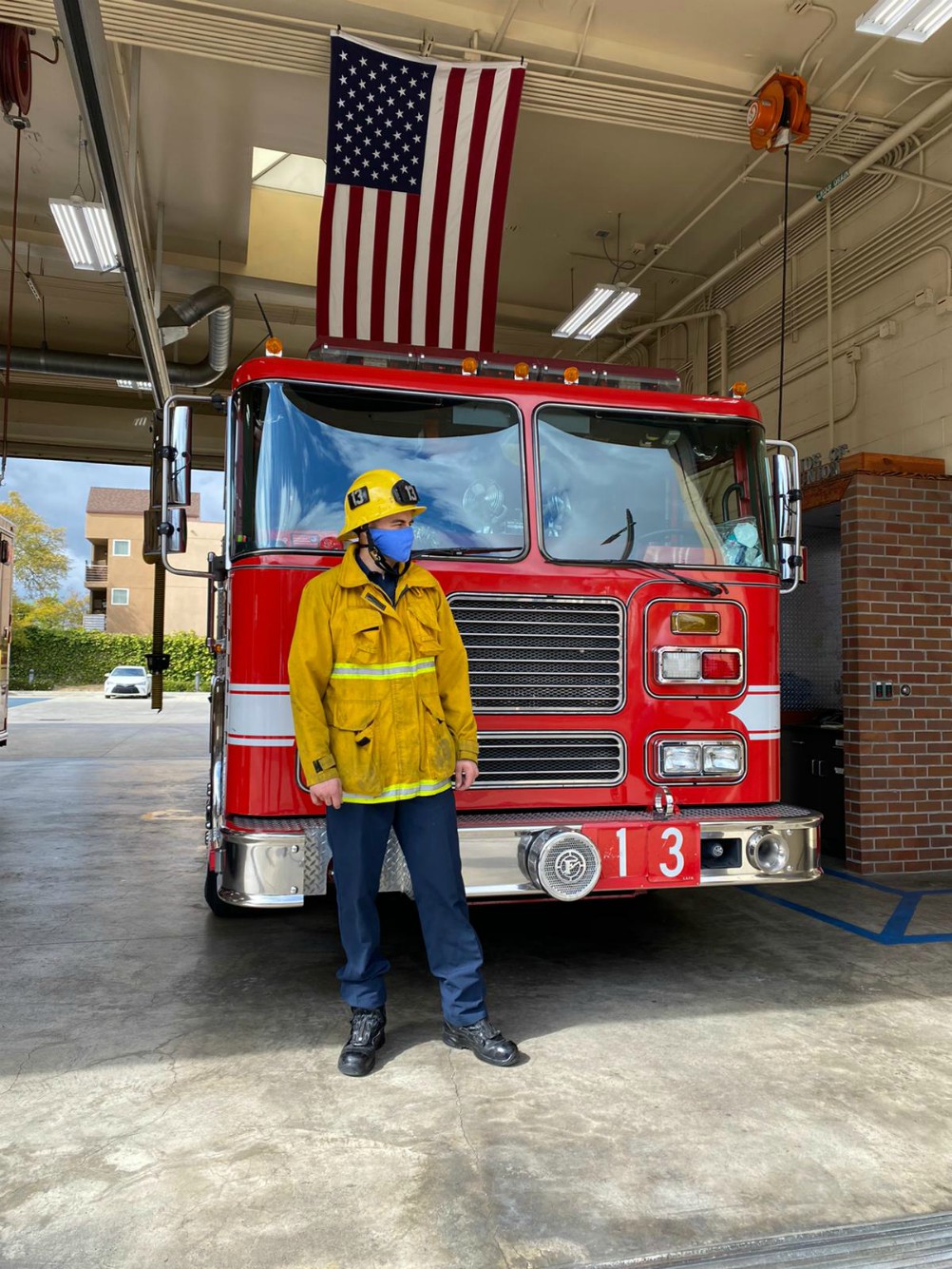 In the meantime, Jogiel said he expects to ramp up to making about 10,000 masks per week at his factory in Downtown Los Angeles. While Ari Jogiel typically manufactures apparel for more than 100 retail brands, all efforts have now been diverted into mask-making as orders have been canceled for the foreseeable future.

“Every brand operates at their own pace, so it’s hard to tell,” he said when asked when brands would resume production at his facility. “I’m expecting a huge hit to most of our brands, unfortunately.”

Four retail brands remain as clients, Jogiel said, and three are having masks produced for their own employees to wear at work. One is creating masks for sale on their own retail site.

Still, Jogiel says its full steam ahead for his business, for as long as the pandemic rages on. “We want to donate as many masks as possible,” he said, citing an internal goal to reach 100,000 masks. “We want to grow our movement, make it stronger, and help people on a regional and national level who are in need.”

Soon, Jogiel will open up donations to more organizations. “Right now we have the infrastructure, but it’s about growing the demand to expand and get more partners so that we can keep donating to more places,” he said. “We’re interested in growing as much as we can.”

Just south of the city in Gardena, Calif., small sporting goods and apparel manufacturer String King has also shifted its business to help with the PPE shortage.

The company, which normally produces men’s and women’s lacrosse sticks and active wear, has pivoted to producing face masks and protective gowns. Thus far, the company said in a statement, it has produced more than six million three-ply disposable face masks, three million protective gowns, and 300,000 reusable cloth face masks for use by hospital systems, essential personnel and the general public.

While many brands and manufacturers have been put in the tough position of furloughing employees due to decreased demand, String King said in a statement that it had hired about 50 local garment workers directly, and contracted about 50 others to keep up with the ever-growing need for PPE.

The company is currently installing more than 50 face-mask specific sewing machines at its local facilities, and will add about 200 more employees to the effort who had previously been furloughed or laid off during the shutdown of non-essential businesses.