The L.A. native spent the early days of her career learning the ins and outs of Instagram, Facebook and Twitter. Acting as a web guru for lifestyle marketing and entertainment firms like NBC Universal, Variety and Trendera, which provides brands with consumer insights and trend forecasting, Carter “just fell in love with using social media to promote different things.” She even started her own agency, Elle . A Social, Inc. to capitalize on the growing importance of social platforms in driving online commerce.

“I kind of had this moment where I thought, ‘What am I doing giving other people like my expertise, when I should be applying it to something that I think is missing in the market?’” she said. The desire to do more than promote other founders’ visions led Carter to examine her own gravitation to certain products—chief among them, active apparel.

The 2010s saw the rise of athleisure, taking shape in garments that straddled the line between performance and casualwear. Lululemon became a fixture at retail, representing a new, premium offering that added style and exclusivity to the space. Over the years, other brands cornered their own markets. “Gym Shark was for weightlifting, Outdoor Voices was recreational, and Alo at the time was very yoga-focused,” Carter said. As a shopper, she saw an opening for a line more accessible to non-athletes, that delivered the style of streetwear with a hint of performance. “I wanted to design something that could be functional and chic at the same time,” she added.

Part of that vision involved developing a cohesive collection in colors that felt practical for everyday wear. “I was sitting at a coffee shop on Melrose looking at these girls and I said to myself, ‘It would be so much better if they had matching sets, instead of disjointed combinations like black leggings with a royal blue sports bra.’” These ruminations led to Set Active, which Carter launched in 2018.

Adding to the Line: La Ligne Steps Into Jeans

Everlane Secures $25 Million Loan for Next Stage of Growth

Even in its nascent stages, she knew that social media would be integral to the brand’s success. “Digital word of mouth is everything,” the CEO said, noting that she began vetting designs by sharing photos and videos to her own 5,000 personal followers. “I showed the behind-the-scenes moments whenever I possibly could,” she added. “I just brought them along through the process with me.”

Carter’s followers got an unfiltered view of the design and development process, which took place at her apartment. She shared the unboxing of samples, inviting friends over to try on the gear and snap mirror selfies, promoting the line to their friends on their own profiles. The grassroots approach generated small-scale buzz at first, but curiosity began to grow. “People were kind of wondering what it was, and it started a whole conversation about this brand that keeps popping up.”

Carter recognized that social media could do more than generate interest—it could become a source of invaluable insight. “I began selling my samples on Instagram in exchange for feedback,” she said. Transacting on Venmo and DMing with customers, she learned what was working for the brand—and what needed improvement. 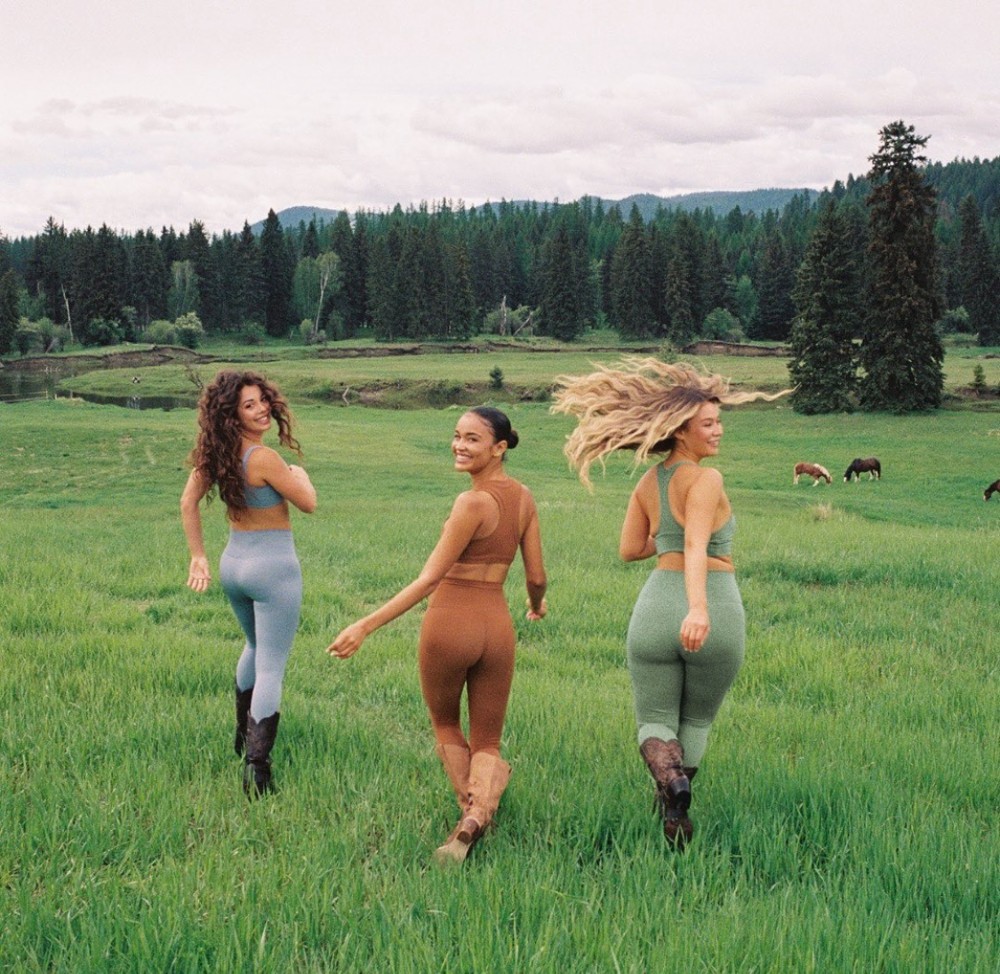 Set’s fabrications, developed with an Asian supplier, immediately set the brand apart, Carter said. The material, which is made using a seamless process, is knitted by machines in a tubular configuration. The 75-percent polyester, 25 percent spandex blend’s soft hand-feel and ample stretch won positive call-outs from new customers, and the brand has maintained the fabrication as a core part of its line of leggings, bike shorts, sports bras and dresses.

As Set began to grow, Carter came to rely on shoppers to drive decision-making around styling, too, adopting a data-driven approach that propels the brand’s process. Set’s design team relies on historical sell-through data to inform its color palettes, and even the timing of its limited-edition drops. “Customer buying has become different over the last four years,” Carter explained, noting that the fast pace of fashion has led to an increased focus on hyper-seasonal trends. A burnt orange might flame out in early fall, for example, but sell out just six weeks later. Looking back at previous seasons can provide designers with up-to-the-minute insights about what shoppers might like to see at different points throughout the year, she said.

A desire to understand—and stay ahead of—shifts in shopper behavior led to the hiring of a data scientist tasked with analyzing product performance alongside buyer feedback. “We go over past data to determine what the purchase order is going to look like for the next drop,” Carter said. Set identifies its best-selling styles, colorways and silhouettes from each season, using them as a template for future designs. Staying true to its digital roots, it mines its social media community for insight, continuing to solicit opinions from followers. Today, set has 439,000 on Instagram, and more than 54,000 on TikTok.

The brand has also tapped into the cultural zeitgeist through storytelling. Throughout 2022, Set has released capsule collections inspired by different cities and states across the U.S., from Hawaii to Aspen, L.A., Miami, New York, and most recently, Montana. Carter said that the limited-edition nature of the drops creates an air of excitement among devotees, as the brand rarely replenishes sell-outs. It also allows designers to package small ranges with key colors in a way that is easy for the consumer to digest—the antithesis of the endless scroll provided by brands with larger assortments. 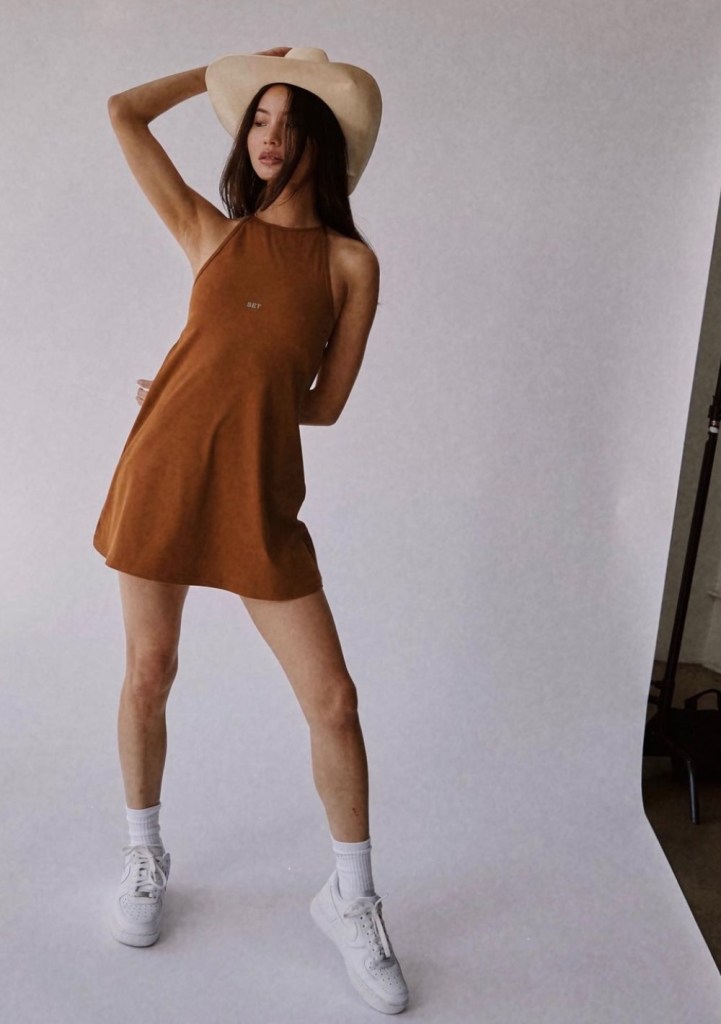 L.A.’s capsule featured a Laker purple color way, tapping into the city’s passion for its basketball team, while the Montana collection featured a denim-like hue called Blue Jean, a warm chestnut brown, meadow green and grayish-mauve Stable. The collection found levity with Cowgirl, a lighter shade of millennial pink. According to Carter, the Montana focus was spurred by her fascination with the television hit “Yellowstone,” along with the broader trend toward Western styling permeating the fashion space. With each location-based collection, the brand curated a “souvenir shop” with state memorabilia to accompany the merchandise. Carter said that these specialized drops have turned bras and biker shorts into collectibles, in a sense. “Next year will have a new theme,” she added.

Carter sees these strategies as essential community-builders. For that reason, the brand is likely to remain digitally native and direct-to-consumer. “We’re so collaborative—everything we do is based off of the community, and I think you lose that aspect when you go wholesale,” she said, noting that she still gives followers on Instagram and TikTok a peek behind the curtain, even filming team meetings and design sessions. “The athleisure space is now so saturated,” she added, “and I think our storytelling, and the fact that we still listen to what the consumer wants, is what sets us apart.”