The RealReal’s shareholders are taking the company to task following widespread reports that the luxury resale platform’s core value proposition—genuine, authenticated premium items—was too good to be true.

Plaintiff and shareholder Michael Sanders filed an amendment to a class action lawsuit in Northern California’s U.S. District Court on Friday, following an original complaint that the luxury resale marketplace made false and misleading statements regarding its authentication process prior to its initial public offering. Sanders, who filed individually and “on behalf of all others similarly situated,” alleged that The RealReal’s supposedly stringent efforts to vet products on its site were nothing but a smokescreen, which in effect artificially inflated the company’s stock price.

Following its 2019 IPO, the company sold 17.25 million shares at $20 per share, generating $345 million in gross offering proceeds. Since that date, as a result of the numerous exposes by media outlets investigating its authentication claims, Sanders alleged, “The RealReal’s stock price has fallen well below its IPO price, damaging Plaintiffs and Class members.” Sanders and the other plaintiffs are now requesting a trial by jury, with hopes of being awarded damages.

The RealReal’s registration statement, which it filed with the U.S. Securities and Exchange Commission before its IPO, included a prospectus stating that the company’s “highly trained experts” build trust in its buyer base by “thoroughly inspecting the quality and condition of, and authenticating, every item” received.

However, Sanders’ suit alleged that only a “small proportion” of the tens of thousands of items processed each day were actually seen by trained authenticators. Most were reviewed only by The RealReal’s copywriters, who were responsible for vetting up to 300 items each day. Under lofty daily quotas, employees could spend as little as two minutes with each product as they prepared descriptions and photos for the e-commerce site, testimonials from former workers revealed.

“As the inevitable result of this highly-pressurized ‘authentication’ process, hundreds of counterfeit items were processed and sold to RealReal customers,” the suit alleged, adding that the company kept tabs on its failures, circulating an internal “Faux and Tell” document on a bi-weekly basis highlighting counterfeit items that made it out the door to shoppers.

On each “Faux and Tell” memo, copywriters included photos and descriptions of the fake wares, along with notes that might help future employees tasked with authenticating goods. In a document featuring a counterfeit Dior Homme utility jacket, for example, they wrote that the size, placement and color of its tags, along with its unbranded zippers and snap hardware, were giveaways that the piece was fraudulent. 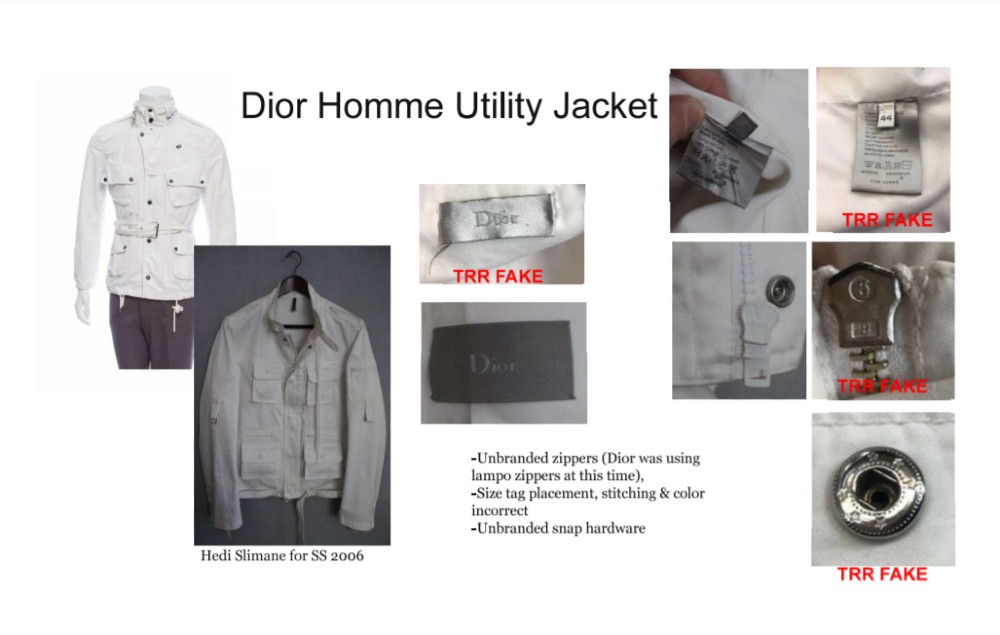 Meanwhile, a memo on a pair of Golden Goose low-top Superstar sneakers asserted that the shoes’ pockmarked insoles and missing country of origin and size stamps were indicators of its faux status. 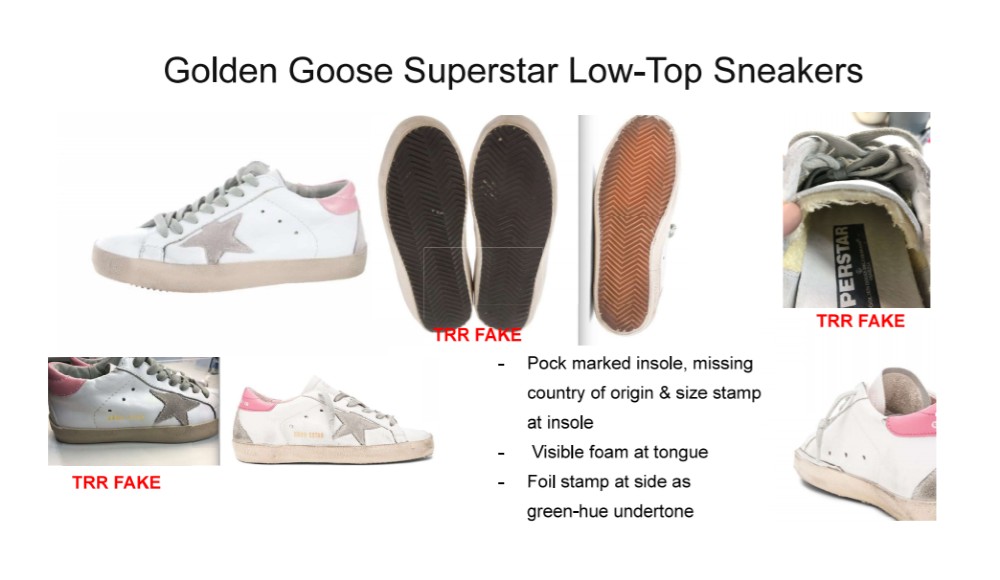 While it’s easy to see how some of the site’s sophisticated fakes might have avoided detection by an untrained eye, some items seemed to pass through the hands of copywriters without a second glance. A pair of Louis Vuitton slides, for example, which bore the brand’s name in a cartoonish cursive script across each shoe’s vamp, seemed particularly out of sync with the luxe label’s standard offerings. Indeed, copywriters wrote, “This particular style was never created” by the fashion house. Similarly, a Victoria Beckham dress that was sold to a shopper bore a strikingly incorrect tag, using a different font and wording than the U.K. designer’s standard label. It also bore lettered, rather than numbered, sizing. 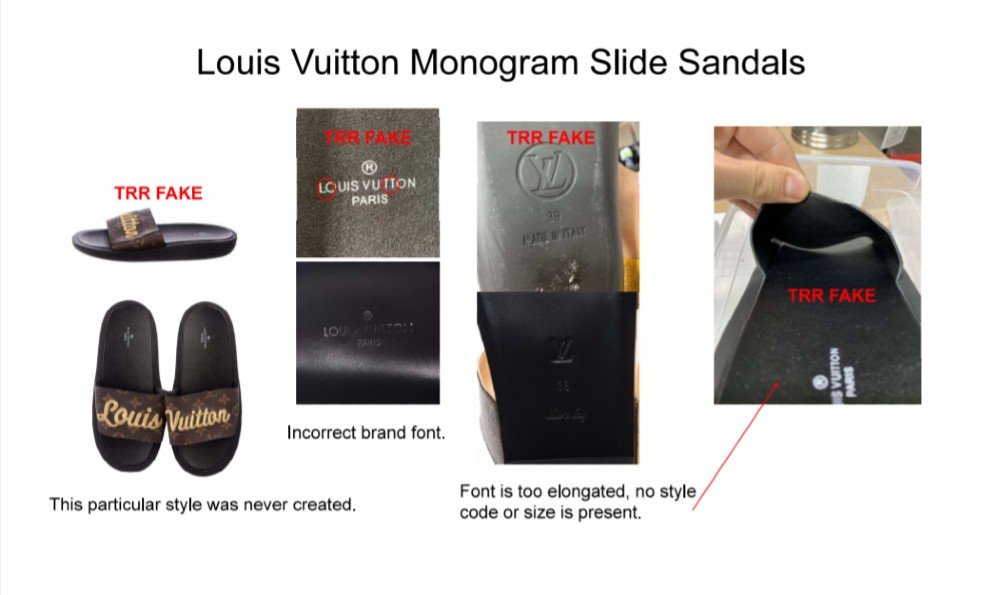 Still, other examples illuminate just how pervasive the issue of counterfeiting has become—and demonstrate the adeptness with which bad actors have honed their craft. The lawsuit alleged that The RealReal reserves its small team of trained authenticators specifically for “certain brands and items deemed to face a particularly high risk of counterfeiting,” but the company’s own records show that items of all kinds, from T-shirts to key chains made by designers beyond the top European fashion houses, are consistently faked.

A closer look at the lackluster training regimen provided to new employees sheds light on how so many goods managed to slip through the cracks. A former worker interviewed for the class action complaint said that their initial training session amounted to a one-hour PowerPoint presentation.

When copywriters did receive additional training in the form of brief bi-weekly meetings that frequently lasted under an hour, they remained “distracted by the onerous quotas,” another alleged. Eager to return to their posts, they often missed out on the information being imparted by management. “You’re counting the minutes and you’re not really listening,” the former employee explained.

“The goals [quota] of each copywriter [were] too high for the number of things” that managers expected employees to process, another said. “That is just not enough time to do the authentication and hit that number by the end of your eight-hour shift with your 30-minute lunch and your two breaks.”

“A lot of copywriters tried to voice our concern—we’re not really doing the customer justice by processing the items as fast as possible,” a former copywriter said. “A lot of people took shortcuts, didn’t do the full research, didn’t authenticate the items properly.”

The copywriters brought their concerns to human resources, according to the suit. A March 22, 2019, email to Mary Chavez, the company’s compliance senior manager and employee relations lead, along with several other HR managers, revealed that employees’ frustrations had reached a boiling point. A number of workers signed a “petition” alleging that the high quotas often ate into their lunch and rest periods, that they had received written warnings for not meeting their quotas even on days they were out of office or out sick, and that the company fostered a hostile work environment rife with favoritism and retaliatory behavior.

These conditions only intensified leading up to the IPO, a former employee recalled, noting that management, including The RealReal CEO Julie Wainwright, “were pushing heavy for people to hit the quotas or go above.” About one month before going public, the employee said the executive delivered an address to the company, “talking about the IPO in general, [saying] ‘That’s why we’re making this drive and this push, because we don’t want customers to have such a long wait.’”

“The RealReal had to dramatically ratchet up the number of items it offered for sale to be able to continue reporting that the company was making money,” another worker alleged. “That was partly because as compared to earlier times in the company’s life cycle, it was receiving more goods of lower quality for consignment than it had at the company’s inception.” The lawsuit claims that the influx of lower-end goods affected The RealReal’s profitability, given that the processing costs were still the same even though margins on these items were lower. In order to appear more attractive to prospective shareholders, the company had to process and sell more goods, faster.

Ultimately, a former copywriter reported, The RealReal’s once unique selling point hasn’t held up, and its authentication practices “didn’t match what the business model was portraying to the consumer.”

“When they say, ‘We looked at everything,’ that wasn’t the reality of it. Everyone knew that it was smoke and mirrors,” they added.

These pervasive problems could have played a part in The RealReal’s efforts to forge direct relationships with brands like Gucci and Burberry. Though these tie-ups are mutually symbiotic, the platform would inflate the supply of legitimate branded product flowing into its stores instead of relying on scamming consumers trying to pass off ersatz wares as the real deal.