American consumers are feeling the heat of the coronavirus pandemic as it continues to wreak havoc on the global economy and a new survey has found they are feeding their fears and anxieties with a dose of familiar comforts.

In a survey of 500 consumers in the U.S., Cotton Incorporated found consumers are using their newfound homebound lifestyles to shop, watch the news, surf social media and wear more soft, comfortable loungewear, while snacking more often, of course.

“From a category perspective, the browsing of activewear/athleticwear (78.7 percent) and sleepwear/loungewear (75 percent) had a high purchase ratio; with 39.6 percent of consumers saying they had made purchases from those categories,” Cotton Inc. said of the results. “More than 84 percent of surveyed consumers claimed to look for apparel made for comfort, with nearly 46 percent claiming to have purchased such an item.”

More than 60 percent of consumers polled said they were wearing more casual apparel and activewear, the company said, and much of that interest has been directed toward natural textiles like cotton.

Consumers also ranked cotton “very safe” in a hypoallergenic sense at the highest rate (55.4 percent), compared to the next highest fabric in that metric, spandex, at 27.8 percent. 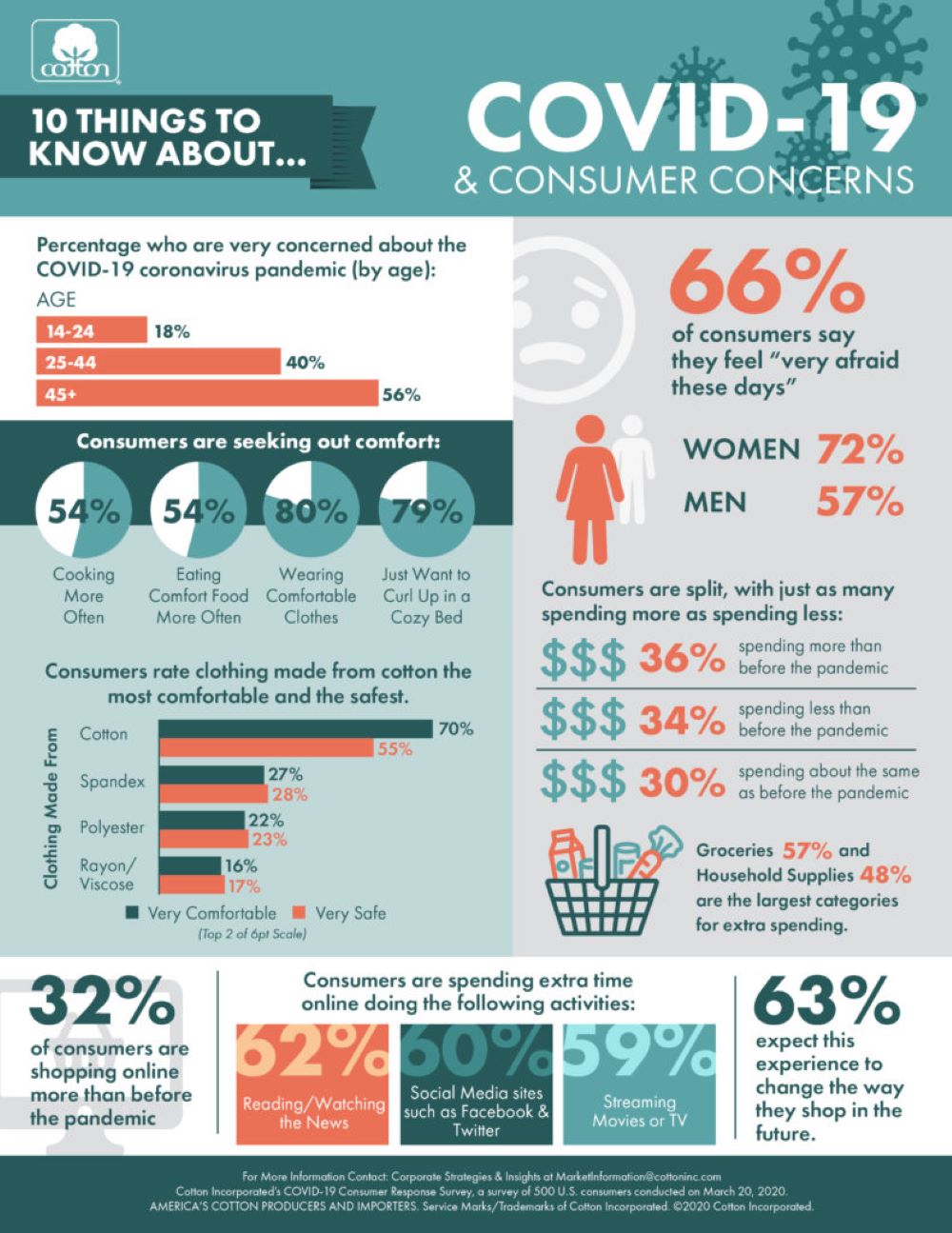 When it comes to purchasing new products, nearly 36 percent of consumers said they were spending “more” or “significantly more” money than before the pandemic. By contrast, more than 31 percent claim to be spending about the same amount of money, with the balance reducing their spend for the moment—indicating that consumer behavior is all over the map.

Much of the spending that is still occurring online, according to the survey. Of those polled, more than 78 percent said they were spending the same amount of time, or more, shopping online during the pandemic, while just 14.5 percent claim they’re shopping less. Many of these reluctant shoppers (more than 61 percent) largely cited concern about their personal economic situation as their top reason for tightening the purse strings.

Many shoppers are wary of the risks of visiting stores amid the outbreak. A majority of consumers (nearly 59 percent) believe online shopping is “safer” than the alternative, the survey found, with roughly 48 percent citing the mass shutdown of retail stores as their rationale for increasing their online spend. But for about 46 percent, increased free times affords more time to surf sites for new goods, and roughly 56 percent describe shopping online as a “fun” that gives them something to do.

Fear is a driving force for consumers right now. The survey found 66 percent of consumers are “very afraid these days,” with a larger number of women (72 percent) expressing that fear compared to men (57 percent).

Concerns regarding the pandemic increase with age, as consumers 45 years and up said they were “very concerned” at a rate of 56 percent, well above the 40 percent of 25-to-44-year-olds and 18 percent of 14-to-24-year-olds who answered the same.

Americans are responding by not only spending more time shopping online, but also by retreating back to familiar comforts. Of those surveyed, 71 percent said they were watching more television, about 67 percent said they were watching more news, nearly 63 percent are wearing comfortable clothes more often and more than 52 percent admit to more frequently indulging in comfort food and snacks.