Quarantine culture has taken its toll on fashion this year, but one athletic label is looking to benefit from the rise of homebound hobbies and shelter-in-place style.

Champion, the sports-focused fashion phoenix that’s shooting for $3 billion in revenue, is no stranger to the world of novel—and nostalgic—collaborations. In the early days of the pandemic, the brand went straight for millennial heartstrings with a Sesame Street tie-up, bringing the cheerful faces of Big Bird, Elmo, biscuit-bingeing Cookie Monster and other characters from the beloved children’s show to adult- and kid-sized hoodies, sweatshirts and joggers.

Last month, the athleticwear label’s limited-edition line of T-shirts and hoodies created in partnership with General Mills offered Champion’s signature spin on classic cereal brands. One tee reads “It takes a little Wheaties to make a Champion” while another depicts the iconic Lucky Charms leprechaun pouring his technicolor rainbow of marshmallow charms into a Champion-branded pot of gold.

Just weeks prior, the athleisure-leaning label affirmed its interest in the gaming space with a patent-pending hoodie drop that solves for the many of the serious gamer’s most pressing problems, whether that’s wrangling a sweatshirt hood over bulky headsets or fretting over sweating through marathon, hand-cramping sessions at the console.

Gaming, it turns out, is thriving in the midst of a coronavirus pandemic that canceled team sports for months on end and gave consumers little reason to disconnect from devices. Though shoppers have largely paused or pruned their discretionary outlays over the past seven months, 39 percent of the 13,000 consumers polled for an August Simon-Kucher & Partners survey conducted with Dynata are shelling out more each month to fuel their gaming habit. They’re also even more glued to their virtual worlds (30 percent), dialing up their favorite video game streams more frequently (42 percent) and branching out from familiar favorites to explore new escapist offerings (60 percent), per the 17-country survey.

Champion is hoping to cash in on what gaming sector research firm Newzoo says is a $159.3 billion market with a drop timed to the release of the new “Crash Bandicoot 4: It’s About Time” game that landed on a range of PlayStation and Xbox One consoles earlier this month, the first entry into the 26-year-old franchise in more than a decade. The limited-edition Champion x Crash Bandicoot Gamer Capsule launched exclusively on champion.com on Oct. 8, with retail prices at $90 for the hoodie and $35 for the graphic tee.

The launch, says Champion Teamwear general manager Tyler Lewison, underscores the label’s commitment to the gaming industry, which has recently attracted interest from the likes of Nike, K-Swiss and Louis Vuitton.

“As a brand that embraces the gaming space, we wanted to create product for gamers that speaks to them in an authentic way,” Lewison told Sourcing Journal. The collection, he added, marks the first collaboration sold on the brand’s website using its new gaming-specific garment design that “modernizes the classic hoodie for the gaming consumer” with two years of data culled from “gamers of all levels.”

“The emergence of gaming has brought forth a new social entity that is on the rise; one that is now being recognized globally,” Lewison added. “Champion wants to meet the needs of gamers with apparel that tells their story and we are excited to be able to do that with the launch of Crash Bandicoot 4,” which follows an orange Aussie marsupial and his “lovingly absurd” pals on a high-stakes quest to—what else?—thwart an evil genius and save their multiverse from imminent destruction. 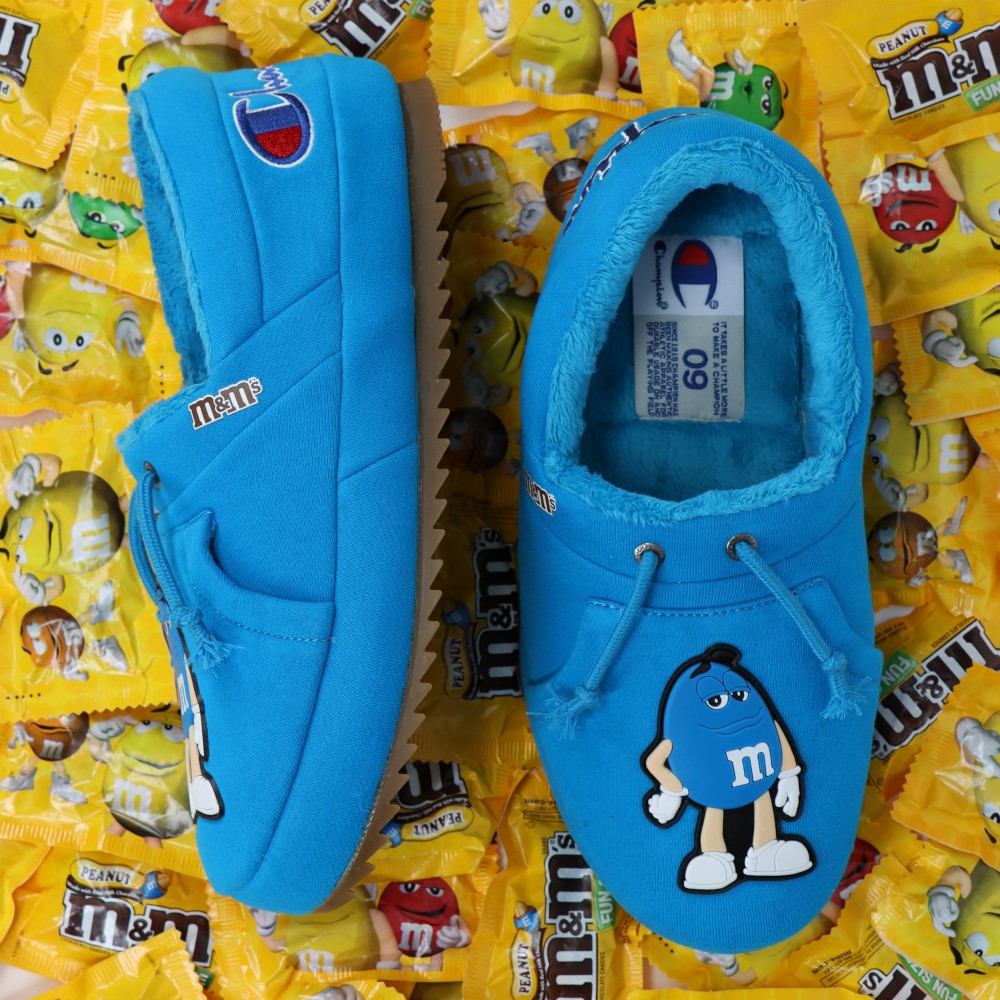 Meanwhile, another Champion collaboration taps into the pandemic-induced resurgence of America’s intractable sweet tooth. In August, the National Confectioners Association (NCA) pointed out that consumers “value chocolate and candy during these uncertain times because of their uncanny ability to boost moods and lighten perspectives.” Data collected from March 15 through Aug. 9 by the Washington, D.C.-based group shows chocolate sales up 17.9 percent at grocery stores alone, and 5.5 percent overall.

And few candy brands have secured the place in the nation’s hearts (and stomachs) that M&Ms have in the 79 years they’ve been enticing hungry consumers. To keep flagging spirits up heading into the holiday season as social distancing traps much of America in limbo, Champion paired with the Mars-owned “classic Americana heritage brand” to create a line of footwear suited for kicking back in quarantine.

Gamifying the experience even further, a quiz helps shoppers pick the color-matched descriptors that best reflect their personality. The red M&M is described as a “smart” and “outgoing” “leader” who’s also prone to being “catty and sarcastic.” “Guileless” yellow is “more naïve than all the rest,” while blue—“up on the latest trends”—is “a little cocky and a lot of cool.”

Though “irresistible” and “neurotic” orange types are “doomed to be eaten,” “quick-witted” and “flirty” green finds “the rest of the gang to be a bit childish.” Last but certainly not least, brown has the “hidden talent” of “always being right.”

Slides and fuzzy slippers in The Champion x M&Ms capsule are available in black, grey, red, blue, orange and yellow. The co-branded products will be available for purchase at Foot Locker on Nov. 12.