In the modern NBA, being a superstar means much more than just being good at basketball—it means being a fashion icon, as well.

To demonstrate, peer-to-peer fashion resale platform Poshmark released new data highlighting the trends and styles that saw noticeable growth with shoppers as a result of fashion trends brought to the fore by NBA luminaries over the 2018-2019 season.

Sneaker sales are the first place to look when examining the NBA’s influence in fashion. Poshmark’s data confirms that athletic footwear sales jumped during the most recent basketball season versus the one prior. From Sept.1, 2018 to Aug. 31, 2019, sneaker sales rose by 88 percent on the platform, with an increase of 82 percent in the number of sneaker-related listings compared to the previous year.

Poshmark said that Nike, Jordan and Adidas were the top three sneaker brands in terms of sales during the season, followed by Vans and Converse.

Brands like Under Armour and Adidas have also made inroads in athlete sponsorship in recent years, a realm typically dominated by Nike and Jordan.

Three-time NBA champion and Golden State Warrior Stephen Curry, one of the most popular and well-liked athletes in the league, was responsible for helping Under Armour climb three spots to become the seventh-most-purchased sneaker brand on the platform over the year, Poshmark said.

“Tunnel fashion” has become another key area in which a modern NBA superstar can express his sense of style beyond the team uniforms. Players have begun to take advantage of the camera time and public attention they receive when making the journey from the inner bowels of the stadium to the bright lights of the court—and Poshmark says it has the sales numbers to prove it.

A style called “the Dematha Look” became widely popular among NBA players in the spring of 2019 and was even featured in the Washington Post in March, which dubbed it the “hoodie-and-blazer phenomenon.” According to Poshmark, the look led to sales of hoodies increasing by 109 percent and blazer sales increasing by 100 percent compared to the prior year.

White denim was another fashion trend that gained momentum as a result of NBA influence, led by Houston Rockets guard Iman Shumpert. Poshmark said that after a Vogue x GQ video shoot featured Shumpert and his wife donning white denim, sales of similar styles rose another 10 percent after climbing 56 percent in the previous year. 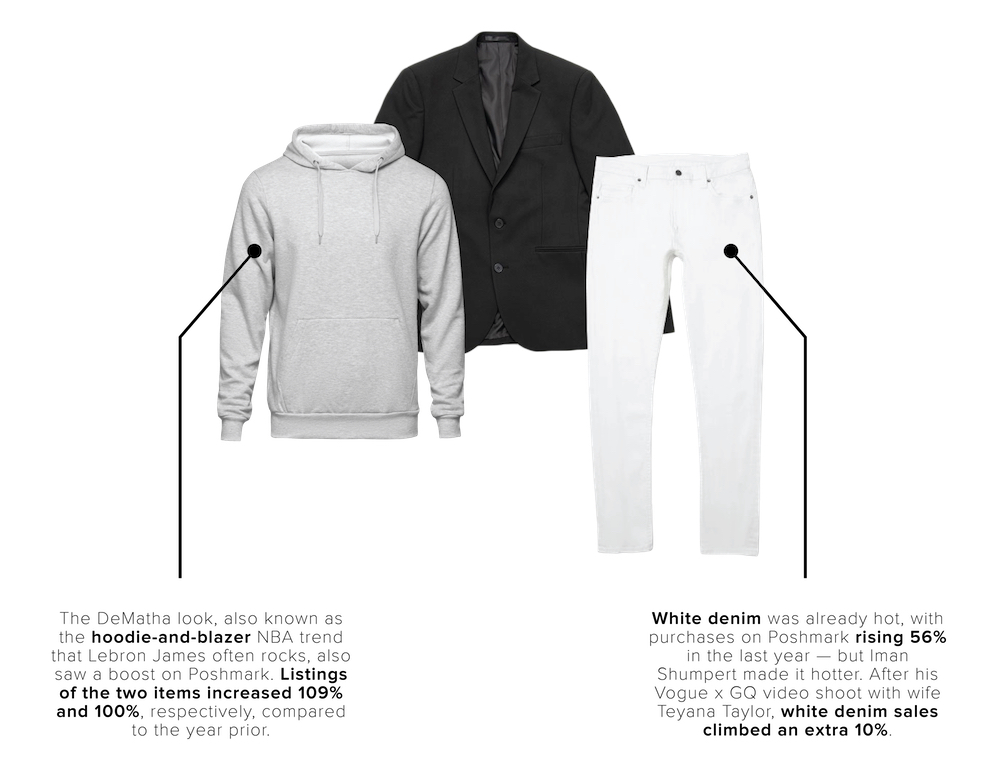 “Player style was more attainable than ever with brand collaborations on the rise,” Poshmark explained. “Whether players were launching their own lines or partnering with established brands, fashion provided another opportunity for athletes to diversify their interests.”

Cleveland Cavaliers forward Kevin Love was central to a men’s wear capsule with Banana Republic, which performed well on Poshmark’s platform. The “BR/K.LOVE-18” collection stood out among the crowd with its suit jackets being the big winners of the season.