While Forever 21 is certainly feeling some financial pressure these days, rumblings of a Chapter 11 bankruptcy filing–or even the retailer’s demise–isn’t exactly imminent.

Whether the teen fast-fashion chain can avoid a filing for bankruptcy will depend on how current talks go with lenders and landlords. And at least one restructuring expert called the retailer “too big to fail.”

This restructuring expert, who asked not to be named, explained that landlords are incentivized to work out deals with Forever 21, rather than allowing it to fail because of the daunting size of many of its big boxes–and their likely inability to find suitable replacement tenants for some of those boxes.

Interestingly, though, it’s the size and abundance of those stores that’s largely to blame for Forever 21’s current financial distress. Another is the slowdown in demand for fast fashion.

“They’ve been overstored and oversized for years, with stores not just at 20,000 square feet, but many two-floor, 40,000 square feet units–far more than demand has warranted,” Craig Johnson, president of research firm Customer Growth Partners, said. Adding to that, Johnson said the “biggest and most immediate problem is the 28 to 30 percent occupancy cost ratio. REIT landlords are reluctant to kick them out, since they would get yet another big and often two-level dark space, with few, if any, junior anchors ready to re-tenant the space.”

The occupancy cost ratio is essentially an estimate that occupancy costs are in the range of 28 percent to 30 percent of sales. And if accurate—or even within actual range—that would mean Forever 21 has very high overhead costs for its stores, which eventually becomes unsustainable if sales suddenly start to decline. There have been whispers in the industry for some time now that comparable-store sales have been on the decline for years.

Annual sales at Forever 21 are believed to be in the ballpark of $4 billion. The high overhead for the retailer’s stores has had some in the industry wondering about its cash flow, with at least one retail expert speculating that the company is currently in a “negative cash situation.” That kind of talk and conjecture has been dogging Forever 21 for the past four to five years, both for inconsistent cash flow and declining comps. The only difference now is that as the financials have deteriorated, there’s been talk that some landlords aren’t being paid until negotiations over amending certain lease terms get resolved.

But, as Forever 21 said in a recent statement, “Forever 21 is in compliance with all of our agreements and on time with all rent payments.”

Given its high overhead and declining comps, it shouldn’t be a surprise that Forever 21 is now the subject of much speculation.

Teen retailers in general, particularly those with stores in malls, have been hard hit over the past few years because of the trend toward online shopping. Moreover, younger consumers aren’t as loyal to brands as their older siblings. And compounding the negative perception is the fact that the sector has seen its fair share of retail bankruptcies: Aéropostale, American Apparel, and earlier this year Charlotte Russe, to name a few.

In the case of Forever 21, while others in the teen space were retrenching their store base, the fast-fashion chain was going against the trend and instead opening more and more stores, as well as bigger, super-sized boxes. The chain also turned a blind eye to the growing sustainability mindset, particularly among the millennial and Gen Z cohort.

While $4 to $25 price points have been appealing to cash-strapped teens, growing awareness of fast fashion’s costly impact on the environment, has been considerably less appealing. And it isn’t just Forever 21 that’s been impacted by that change. H&M has also been reporting declining earnings, and while Inditex, which operates the Zara fast fashion chain, is seeing sales growth, it’s at a slower pace.

Now Forever 21 is exploring its options.

According to Bloomberg, the chain has as much as $500 million of debt in the form of an asset-based loan that matures in 2022.

When reached by Sourcing Journal, Forever 21 issued a company statement saying: “Forever 21 is speaking with our lenders in the normal course of business and are in compliance with all of our agreements and continue to operate as usual.”

One source close to the company, when queried about the restructuring efforts, declined to elaborate, but also didn’t deny that the discussions were taking place, instead emphasizing that “it’s business as usual at Forever 21.”

Compounding the liquidity issue could be the potential tariffs on imports from China that could take effect as soon as next month.

Forever 21 works with several Chinese factories. One executive at a competing retailer said the tariff issue is a concern for many retailers and that value-priced teen retail operators, in particularly, will have no choice but to raise prices and pass along the increase to customers. What the executive didn’t know was how much of a pull back there might be on the consumer spending front and, consequently, what the impact would be on retail sales and profits. And that’s certainly not good news for liquidity pressured apparel companies. However, like the restructuring expert, the source also thinks Forever 21 will survive its latest financial difficulties, explaining that “it is a big driver of traffic for most mall operators.”

Liquidity issues aren’t new at Forever 21. The chain has been the subject of much financial speculation since 2014, and each time founder Do Won Chang has been able to pull together the liquidity needed to keep the business in operation.

By August of 2015, there was talk of the company having cash flow issues, and that it was negotiating with outside investors for a cash infusion. Several months later, a source familiar with the company’s operations said Do Won was able to resolve the financial matter and didn’t need outside funding. But by April 2016, not even a year later, some vendors resumed grumbling about delays in payment by the retailer. As a privately-held company, Forever 21 doesn’t have the same reporting obligations as its publicly-held counterparts, and as such, factors grew frustrated with the lack of financial reporting, and many began pulling credit lines, and if they did approve them, if was only on an order-by-order basis.

What has helped Forever 21 maintain a certain liquidity over the years, is the sale of distribution rights for some overseas businesses, such as its operation in India to Aditya Birla Fashion in 2016. The Los Angeles Business Journal reported in February that the fashion chain also sold its Los Angeles headquarters in the Lincoln Heights area for nearly $166 million to Blackstone Group. This year also saw Forever 21 exit China’s marketplace, which followed the downsizing and closing in recent years of many of its international locations. 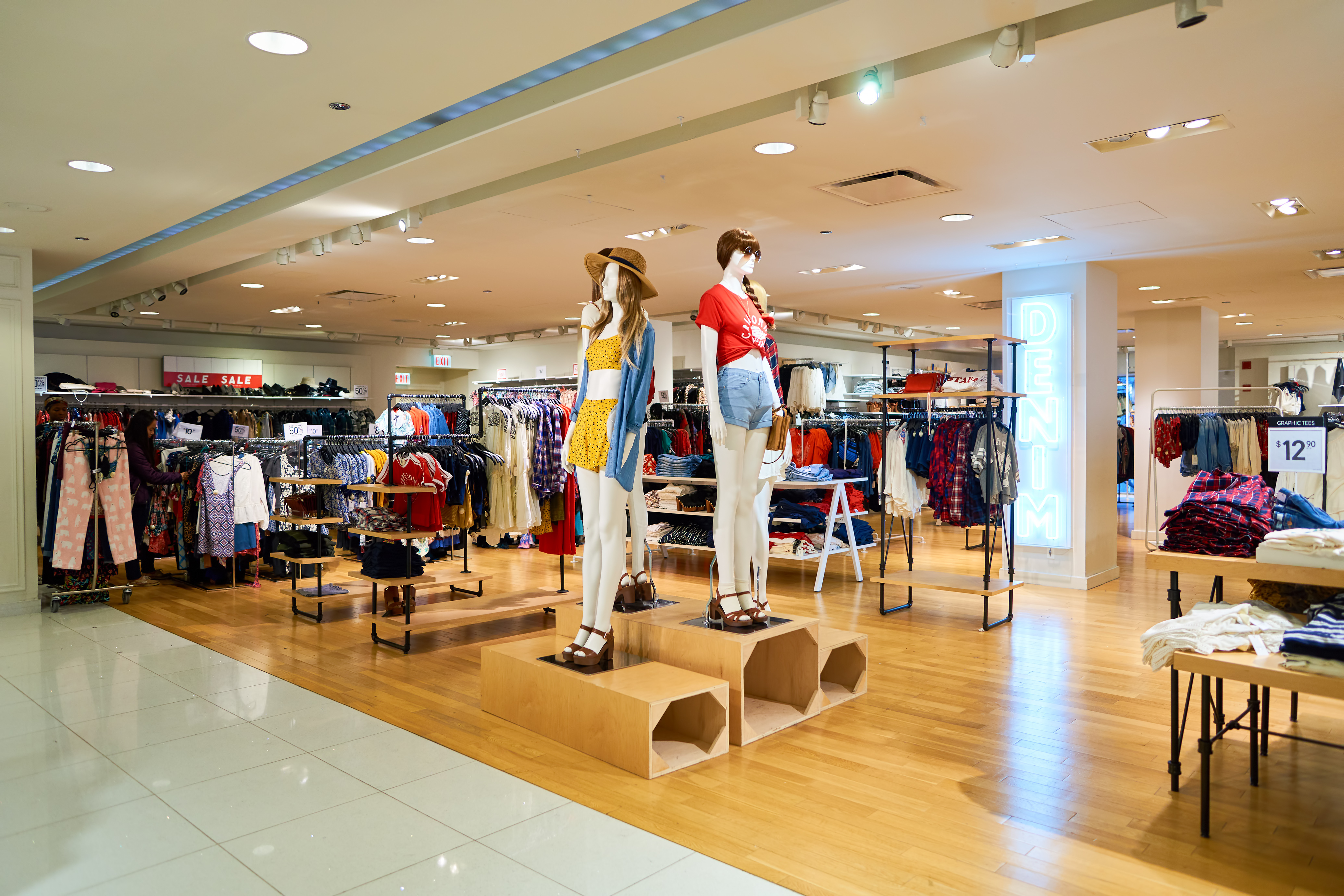 Forever 21 was founded in April 1984 by Do Won and Jin Sook Chang as a single 900-square-foot store in Los Angeles on Figueroa Street, operating under the name Fashion 21. Sales grew from $35,000 to $700,000 by the end of the first year, after which the name was changed to Forever 21. The Changs opened the first mall store in 1989 in Panorama Mall, in Panorama City, Calif., which was roughly 5,000 square feet. In February 2005, Forever 21 acquired 243 locations that had been part of the now defunct Gadzooks teen retail chain for $33 million after the company filed for bankruptcy court protection. In the transaction, Forever 21 agreed to keep 150 locations. Those sites were initially operated under the Gadzooks’ nameplate, but were later converted to Forever 21 doors.

Today, Forever 21 has roughly 700 stores globally, selling fashion and accessories to men, women and kids. Many stores are located across A, B, and C-rated malls. Then there are those grand scale stores under the Forever XXI brand, that average at 40,000 square feet (although the site at Times Square in Manhattan is believed to be 96,000 square feet). In 2015, the retailer began its F21 Red concept, an outlet-styled format where items are deeply discounted, such as classic leggings for $5.90 and skinny jeans at $7.90.

Forever 21 can call itself investor. The company has connected with fellow Los Angeles-based venture capital firm Upfront to lead an $8 million investment in DailyLook. According to a Los Angeles Times story about the deal last September, the startup operates as a subscription service, giving Upfront some of Forever 21’s know-how on scaling the supply chain, and the retailer gaining some expertise in building data-driven relationships with its customers.

Gabriella Santaniello, founder of independent retail research firm A-Line Partners, said of Forever 21, “Their biggest mistake was taking over all the old Circuit City locations and taking on a large store format, which I think is the main issue. That’s a lot of real estate and it’s impossible to tell one ‘department’ from the next.”

That said, Santaniello thinks there’s still a future for Forever 21.

“They are still a big destination for tweens, teens and kids in their 20s. I go in with my 11-year-old niece all the time, and the stores always have good traffic.”

The retailer has been working on collaborations to garner the attention of its targeted customer base. Earlier this year it worked with the sister of the late songstress Selena Quintanilla-Perez for a capsule collection to coincide with the 22nd anniversary of the movie based on her life, and just last week the retailer and Kimora Lee Simmons brought back her fashion brand Baby Phat for a limited edition collection, called Forever 21 x Baby Phat. Other brand collaborations have included Honda, Cheetos, Taco Bell, Hypebeast and Pepsi.

“Will they close stores? Probably, but I think the malls would help them find a smaller location,” Santaniello said. “They’re too valuable across all tiers of malls for the mall operators to just let them go.”

That’s likely what Do Won Chang is hoping for, since he is believed to be looking to restructure operations in a way that allows him to remain in control of the company.