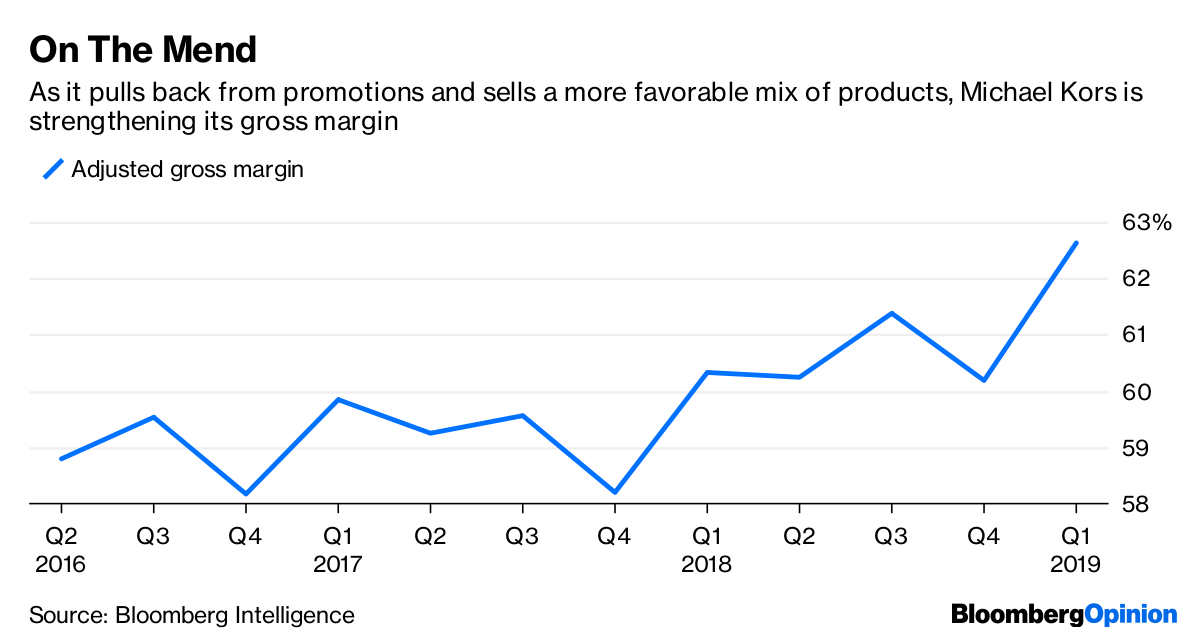 Last year, luxury fashion giant Michael Kors Holdings Ltd. laid out a turnaround plan for investors that called for a wide array of changes. It would release fewer designs, pull back from promotions, renovate its stores and transform its business to rely less on the handbag category.

The company’s latest earnings report is validation that the strategy is working.

Kors reported Wednesday that comparable sales rose 0.2 percent over a year earlier—not exactly growth, but consistent with the pace of improvement the company had promised. And it bumped up its adjusted earnings guidance range for the full year to $4.90 to $5.

The strongest evidence that the brand is on the mend comes from its improvement in adjusted gross margin. Kors, like some of its peers in the luxury industry, had gotten stuck in a cycle of near-constant discounting, but has finally made the hard decision to pump the brakes to protect its profits and brand cachet. In its own North American stores, it moved last year to reduce its promotional days by about 40 percent. And it’s retreated from promotions at major department stores. Those moves appear to be paying off. Plus, on top of all that, the retailer said it managed to sell a more favorable mix of products in the latest quarter.

Another important part of the retailer’s future is to remake itself into a luxury powerhouse beyond just Michael Kors namesake merchandise, with a stable of brands that can more easily court different customers and weather fickle fashion cycles. It took its first major step in that direction last year when it acquired Jimmy Choo for $1.2 billion. This earnings report offered evidence that springing for the luxe footwear brand was a smart move.

Jimmy Choo recorded $173 million in revenue in the quarter, a figure that surpassed the company’s expectations. Executives said that represents a 12 percent increase over a year earlier on a pro-forma basis, and said the results reflected “high-single-digit” comparable sales growth for the Choo brand.

The fact that Jimmy Choo has been able to maintain its growth potential within the Kors empire should reassure investors that the company is right to pursue deals and that it knows how to pick its targets. And the success of the brand could prove fruitful in helping Kors secure its next acquisition. If it proves it knows how to nurture multiple labels, it may find others that are more receptive to its overtures.

Finally, it is encouraging that, within the Michael Kors brand, the company registered positive comparable sales at its footwear and women’s apparel divisions. While handbags will continue to be the heart of the company’s business, it is prudently trying to diversify. The favorable response by shoppers to its other wares suggests that goal is achievable.

A Kors renaissance still isn’t assured. The global luxury handbag market is crowded, and a resurgent Tapestry Inc. will give Kors a serious fight with its Coach and Kate Spade brands. But the turnaround that executives envisioned is on track, and that’s good enough for now.