In our last column, we reviewed extant research that indicated no sustainable progress in labor conditions in global supply chains, particularly with regard to freedom of association, wages and other standards. So what explains the lack of progress? There are several horses in the race.

The first horse is “Wrong Solution.” Private regulation that allows brands to police their own labor practices is the wrong solution. It avoids or crowds out national regulation, as wells as organized workers and bargaining. The best solution gets national governments to write and act out good labor laws.

The second horse is “Not Trying Hard Enough.” Companies are not serious about private regulation. Many adopt policies but do not implement them; in academic circles we call this ‘symbolic adoption’ or ‘policy-practice decoupling.’

The third horse is “Rearguard Action.” This includes implementation failures caused by reliance on poor factory audits, or lack of integration between brands’ sourcing strategies (which tend to ignore or depress labor compliance) and rearguard efforts to raise labor standards.

For Gap and Komar, Sourcing Cost Isn't the Only Concern

In academic circles, opacity in a sector like apparel leads to “practice-outcomes de-coupling.” The lack of transparency about the results of private regulation creates an opaque field where it is impossible for actors—whether they are companies, unions, multi-stakeholder institutions or industry critics—to see what works, and where, and under what conditions. There’s still an awful lot we don’t know about the results for workers after 25 years of CSR (and 25 years of demands to companies and regulators for meaningful disclosure of results).

A key assumption here is that if best practices were readily apparent to fashion brands and retailers, they would adopt them. But not knowing what best practices are, companies continue to do what they do, and actions like repeated auditing and factory-level remediations become ends in themselves rather than means to the end of improving labor standards.

What causes fashion or any field to be opaque?  The lack of transparency is key, to be sure, but opacity is also driven by practice multiplicity, behavioral invisibility and causal complexity. Program and practice multiplicity refers to the differences in private regulation programs of the brands and their multi-stakeholder initiatives. While they focus on largely the same labor standards, there are differences in emphasis or definition for issues such as freedom of association, or fair wages. For multi-stakeholder initiatives, this is to some extent driven by the groups’ governance, that is, the extent to which they are ‘owned’ or dominated by brands. Research by Luc Fransen and Brian Burgoon shows that the private regulation programs most dominated by the companies—WRAP is the poster-child here—have the least stringent requirements and the largest memberships.

But multiplicity manifests in the way companies implement programs, too. To understand these, NCP researchers Chunyun Li and Sarosh Kuruvilla examined the way in which about 20 brands sourcing from the same factory implement their private regulation programs. What they found was that each brand used a different rating scale when evaluating the supplier and their auditors used differential “weights” (i.e. some issues were more important than others) resulting in a factory achieving a good rating by one auditor while simultaneously obtaining a poor rating from another.

An extract from their paper shows the different rating scales used by brands sourcing from the same factory. 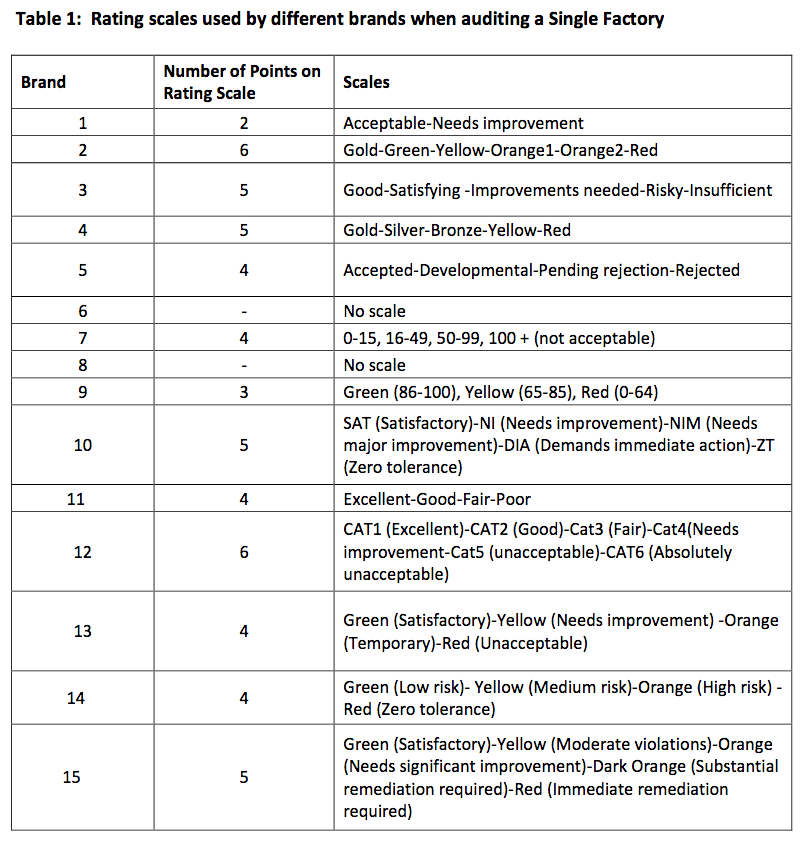 Confusing, right? This variation in rating scales has different consequences for the supplier. Table 2 provides an example: in the same factory, different auditors representing different brands provided vastly different ratings for a similar number of violations found in the factory. 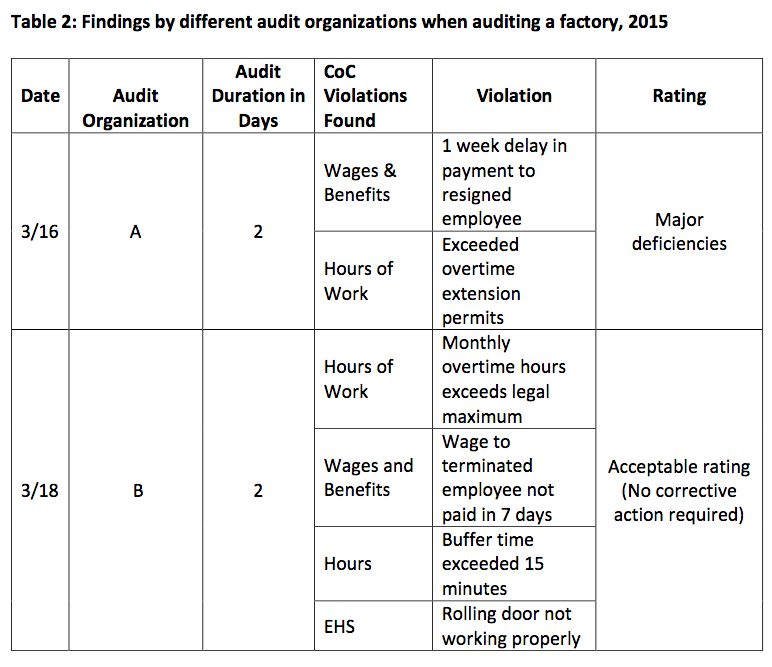 It gets worse. The researchers found that even when the same audit organization audited in the same time period for different buyers, they provided different ratings for the factory—a ‘Zero tolerance’/possible termination rating in the first audit and ‘Good’ two weeks later—with regard to violations that are quite similar.

Supplier factories get mixed messages about what is expected and what is to be done. The obvious solution to this form of practice multiplicity is for the brands sourcing from the same factories to collaborate. They could all collaborate to do just one audit annually, which they would all accept, cutting down on audit fatigue for the factory and reducing auditing expenses for the brands. This is the logic driving the long-running ILO Better Work programs and Social Labor Convergence Program.

But cleaning up practice multiplicity by brands doesn’t by itself solve the problem of opacity and private regulation’s failure to improve working conditions. In our next installments in this series, we’ll lay out the findings on ‘behavioral invisibility’ and ‘causal complexity’, and then attempt to answer the big question:

What should labor governance look like in the post-pandemic fashion business?

For a more in-depth look into this research, please visit the New Conversations Project.