Millions of Americans work out in an effort to stay healthy, but research shows some activewear could be detrimental to the wearer’s health and the environment at large. That’s why more makers are interested in steering their collections toward performance cottons.

Despite consumer preferences, the activewear industry is now dominated by synthetics. One of the most common materials used to make this line of apparel is polyester, for which 70 million barrels of oil are used each year in its production, according to Erica Fyvie’s book, “Trash Revolution: Breaking the Waste Cycle.”

Of course, other companies have been working toward being more eco-friendly by making fabric from used plastic bottles. But the bottles and the resultant polyester are both made from polyethylene terephthalate, or PET, which is derived from crude oil. The bottles are shredded and the remnants are thrown in a mixture of chemicals and water, dried into pellets, and then melted and extruded into polyester yarn.

Microbial issues are another problem with workout apparel. Research from Ghent University in Belgium found pungent perspiration bacteria from skin grows more readily on synthetic fabrics like polyester. Participants in a spin cycling class wore shirts made either from natural or synthetic fibers. The shirts were then thrown in plastic bags and stored in the dark for 28 hours, after which scientists determined the synthetic garments had more potent odors. Additionally, the scientists found Micrococci bacteria, an odiferous germ, were more pronounced in the polyester shirts than those made from cotton. Skin germs consume chemicals in sweat, creating the pungent odor compounds. Natural fibers like cotton absorb this sweat and prevent the smelly germs from growing. But the microbes proliferated over the synthetic materials.

Nearly half of consumers (45 percent) believe that clothing made of polyester, compared to cotton and rayon, has the biggest odor issue or traps odor, according to Cotton Incorporated’s Lifestyle Monitor™ research. 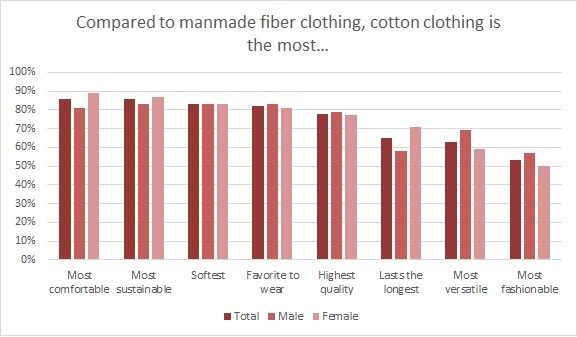 Activewear brands and retailers should consider that, in general, the majority of consumers (51 percent) are bothered by brands substituting synthetics into their activewear instead of cotton, according to Monitor™ data. Add to that, over half of consumers (55 percent) would be willing to pay more to keep their activewear cotton-rich. Among those consumers willing to pay more to keep their clothes cotton-rich, nearly half (49 percent) do so because they say cotton apparel is more comfortable, while a third (34 percent) say it lasts longer, according to Monitor™ research.

Consumers are correct about cotton’s environmental friendliness. Creating polyester requires more energy than producing cotton. Heidy Rehman, founder of the British slow fashion house Rose & Willard, says one ton of polyester requires 29,000-to-35,000 kilowatt hours (kWh) of energy, compared to 7,000 kWh for cotton. Additionally, the Stockholm Environment Institute concludes that the energy used and the CO2 emitted to create a ton of synthetic fiber is exponentially higher for synthetics than natural fibers like cotton. For example, CO2 emissions per ton of polyester are 7.2-9.5 kg per ton of fiber versus cotton, which emits an equivalent 2.35-5.89 kg.

In yet another example of the negative effects of synthetic apparel, an investigation by Orb Media determined that microplastics, the tiny plastic fibers emitted from clothes during laundering, are contaminating tap water in countries throughout the world.

This study came on the heels of analysis by Plymouth University in the U.K. that determined microplastics are making their way from washing machines to the world’s rivers and the oceans. Scientists are concerned that these particles are being consumed by marine life, thus poisoning the food chain. Further, since these fibers are essentially made of plastic, it will take literally years—or decades, by some estimations—for them to breakdown in water, while cotton is estimated to degrade in a matter of months.

On the other hand, studies such as one conducted at the Cornell Composting Facility in 2010 suggest that cotton decomposes at a much faster rate than polyester. And various fabric technologies developed by Cotton Incorporated offer an edge to manufacturers that want to offer performance activewear made of natural cotton. TransDRY® technology wicks and spreads perspiration so cotton fabrics dry faster, as well as or better than most high-tech synthetic fabrics. The WICKING WINDOWS™ technology is a moisture management application that eliminates the feeling of wet fabric against the skin. STORM COTTON™ technology protects the wearer from the outside as it’s a breathable, water-repellent finish for cotton fabric.

Fashionbi, the analytical insights consultancy for the fashion and luxury industry, says consumers looking to prevent health and ecological issues should look for natural fibers like cotton.

“Fashion and textile industries together, through research and technological advances, should develop more and more innovative and sustainable alternative fibers and fabrics in order to prevent potential health and environment hazards,” Fashionbi notes.