Salman Rushdie once said reality is a question of perspective. While true, that was also written before realities of the augmented (AR), virtual (VR), and mixed (MR) varieties came into the picture. After more than a year and a half of COVID-19’s harsh reality, some retailers are finding digital realities are helping to remove shopper friction both in-store and online.

The market for extended reality (XR), an umbrella term that covers VR, AR, and MR, is forecast to reach $30.7 billion in 2021, according to Statista. It’s then expected to leap to $300 billion by 2024. As a refresher, virtual reality immerses users in a 3D world using a headset; augmented reality adds digital elements from the user’s phone to the real world, such as Pokémon Go. And mixed reality is a blend of VR and AR.

Author and business advisor Bernard Marr, whose books include “Extended Reality in Practice,” says augmented reality can help transform retail by making the shopper journey more interesting. It allows customers to see and experience products in more detail, and brings “try before you buy” to the next level.

“There have been some interesting studies on customers’ perception of AR technology,” Marr states, “and the results indicate that the majority of customers are not only open to these tools – they may be more likely to purchase an item when they’ve experienced it through AR, even if they weren’t originally intending to purchase that item.”

Marr cites studies that find 72 percent of shoppers bought something they hadn’t planned to because of AR, and 55 percent said AR “makes shopping fun.”

Brian Wreckler, sales marketing operations manager for Perch, an interactive retail marketing platform, held a webinar titled “Using Blended Reality in Physical Retail. He said Shopify data shows store merchandise that implements some form of AR or VR has a 94 percent higher conversion rate than products that don’t. Additionally, 53 percent of people report they are interested in using VR or AR in the next three months, and nearly half of all consumers are likely to shop at a retailer that uses XR. While some apparel brands and retailers have already started employing AR elements, Wreckler says there is a lot of room for growth.

“When I think about VR and AR experiences that go in-store, it should be almost like clicking on a product online and getting all the information, rich media, reviews, videos and cross selling,” Wreckler said. “When I think about these experiences being deployed, that’s the opportunity. I think the tools that are actually the most mature right now are mixing the physical and digital.”

Wreckler said retailers need to be aware that some XR technology might be really good, but also pricey and time-consuming. He referenced a Zara AR campaign where, when users scan a sensor in-store, a model appears on their phone walking a runway wearing the outfit they scanned. The problem, he said, was the AR didn’t show a variety of models wearing different sizes.

“That’s why we go a little more to the IoT route,” Wreckler said. “With a lot of the brand experiences that we build out, although they shift out almost every two-to-three months, it’s a little bit easier — you’re working with sensors in a fixture and when you pick up an item in that fixture, it’s assigned a specific planogram spot. This compares to the amount of time it takes to implement a whole VR world [like Zara’s]. That’s significant.”

The North Face has a VR campaign that Wreckler appreciated: the brand created a tour of Yosemite that can be viewed on an in-store VR headset. Customers can see what the hikers in the video are wearing, and then go find the garments on an in-store display. Wreckler also mentioned a digital window campaign Perch developed for Waa Ultra Equipment, the trail running retailer: Consumers could learn about different products worn by a window mannequin just by tapping specified areas of the mall window.  If they tapped “shirt,” for example, the screen behind the mannequin would show a video about that shirt, and offer detailed product information, as well.

“This is a cool opportunity, especially when you’re talking about malls, where you can assign different values to a whole windowpane, and learn more about those specific products and get all the additional details,” Wreckler said. “That’s both valuable and fun.”

Almost half of all consumers (45 percent) say they would be interested in apparel brands and retailers using virtual reality to enhance the shopping experience, according to Monitor™ research. Consumers under the age of 35 (59 percent) and those making $50,000+ per year (49 percent) are significantly more likely to be interested in this than their older counterparts (36 percent) and those earning less than $50,000 per year (41 percent). 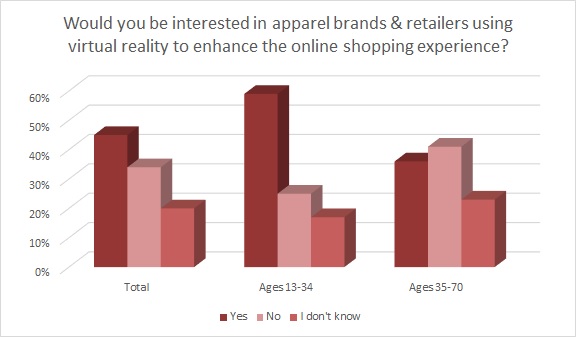 About a third of consumers (31 percent) say they would be more likely to buy clothes from a store that offered virtual reality experiences in-store, according to Monitor™ research.

That’s backed up by data from Threekit, a Chicago-based 3D and augmented reality software company for commerce. The firm says AR increases buyer confidence, eases shopper doubts and accelerates sales. The company finds 71 percent of consumers say they would shop more often if stores used AR, and 61 percent say they prefer stores that offer AR experiences, as the technology shows how a purchase looks and if it will fit their needs.

“In the near future, AR will fast become a completely mainstream way of engaging customers and boosting sales,” Marr says, “rather like social media and apps before it, which means retailers who fail to embrace AR risk being left behind.