Brands and retailers believe Gen Z is the future. But it’s not just treating them well that will lead the way to success. Experts says engaging, empowering and collaborating with this generation will drive sales with this young set of consumers.

“We’re seeing that new experiences are being built that not only cater to Gen Z, but are actually being built by Gen Z and their own vision,” said PSFK’s Lauren Lyons, senior strategist at the New York-based retail consulting firm during a recent webinar. “At the same time, this continued evolution of technology and the marketplace have created new expectations and opportunities around all these ideas that are really important to Gen Z such as authenticity, transparency, empowerment, and then even customization and personalization.”

Generation Z was born between 1997 and 2012, and makes up about 20 percent of the U.S. population, according to Statista. That translates into 68.2 million tweens, teens and young adults ages 9-to-24, according to Insider Intelligence. It’s considered the most racially, ethnically, and sexually diverse generation in history with $360 billion in spending power.

Lyons said more than one-half of Gen Z (57 percent) says they’re interested in participating in online communities around shared passions, and 71 percent are looking to brands to facilitate these connections. She pointed to fashion brand Conundrum, which lets consumers build and customize their own jackets. She said this approach speaks to PSFK’s strategy called “programmable customization.”

“This ability to customize, manipulate and ultimately create a unique-to-me item is a sought-after offering among Gen Z’s creative class,” Lyons said. “And so to help consumers really take ownership of that final design, we’re seeing how brands are providing them with design guidance, creative assets, AR filters, automated printing solutions — all these different digital tools to really allow for their personal preference to come through and have more control over that end-to-end, DIY process.”

It makes sense that Gen Z consumers would want that ability to customize a garment when one factors in that most (71 percent) cite what they already own and like as their top source for clothing ideas, according to the 2022 Cotton Incorporated Lifestyle Monitor™ Survey. That’s significantly more than both Millennials (62 percent) and Gen X (66 percent). However, it closely mirrors Boomers (73 percent).

Of note, just 36 percent of Gen Z shoppers say brand name is an important factor to their clothing purchase decision, according to the Monitor™ research. This is significantly less than all other generational cohorts: Millennials (53 percent), Gen X (51 percent), and Boomers (45 percent). 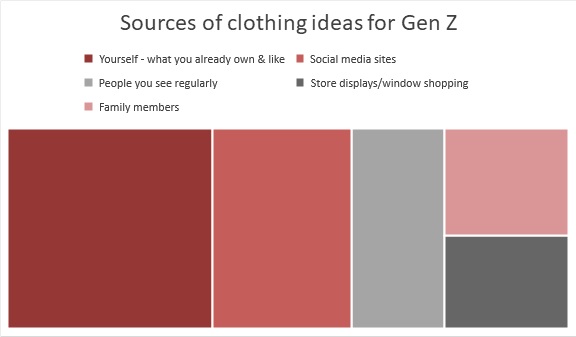 “Sure, TikTok has been a hotspot to hangout with friends and participate in fun dance challenges and trends, but it’s also become a place for users to buy the hottest new products,” Y-Pulse states in a company article. “Subcultures on the app have brought together like-minded users who use the platform to rave [about] their favorite products. We told you about the #TikTokMadeMeBuyIt hashtag, which currently has over a whopping 10 billion views and features videos of users sharing some of their recent purchases that were influenced by TikTok. In recent years, the platform has been taking advantage of viral purchasing by helping brands through features like Spark Ads, a native ad format that allows brands to use organic posts from creators on the app in their ad campaigns. And brands have also been partnering with influencers for sponsored campaigns and ads to reach their followers. All this and more have certainly led to Gen Z shoppers buying.”

It makes sense that brands would be reaching out to young shoppers via social platforms, seeing as 50 percent of Gen Z consumers say they get ideas for potential online clothing purchases from social media, according to Monitor™ research. That’s appreciably more than Millennials (30 percent), Gen X (25 percent), and Boomers (13 percent).

Among the other ways brands are connecting with Gen Z shoppers are through resale/secondhand marketplaces that allow consumers to sell used items on a brand or retailer’s website, PSFK’s Lyons said. In the case of Pretty Little Things, a fast fashion retailer based in the UK, customers who sell through the retailer’s marketplace are rewarded with a credit toward their next purchase. Further, Lyons said retailers like Nordstrom are using its ambassador program to give young creators the opportunity to work with internal leaders and gain mentorship experiences in retail, fashion, content creation and digital styling. Those over 18 have the opportunity to become paid independent stylists, something they can promote on their own social feeds for a 5 percent commission for each item sold.

Lyons said these consumer communities can act as informative and insightful feedback channels for brands and retailers as they’re developing both products and activations.

“Two things to keep in mind about Gen Z when developing your own community is that they’re extremely connected — to each other, to the world’s brands and retailers,” Lyons said. “And this has made them hyper aware. So authenticity and transparency need to be at the center of any community you’re building. And the second part is that because they’re so connected, they’re demonstrating a higher level of engagement. There is an expectation for control of their own experiences with brands or input into their favorite brands. And that’s something that I think retailers should really be looking to harness.”