Even though states have reopened, consumer spending has changed.

The coronavirus pandemic saw spending drop 6.6 percent in March and 12.6 percent in April, according to the U.S. Commerce Department. It did increase 8.8 percent in May, according to Commerce Secretary Wilbur Ross, in an interview with Fox News. He added that consumers were saving at a rate of 17.7 percent for the first five months of this year, double from last year, and the savings rate reached 20 percent in the most recent month.

But a June report from McKinsey & Co. found that consumers didn’t use the government stimulus checks for discretionary items. Instead, they were spending on essentials. The company did point out that while overall spending intent on most discretionary categories, including fashion, is negative, there is “reduced pessimism” about spending on certain categories, including apparel and footwear.

The NPD Group recently reported that year-over-year losses in apparel, footwear, beauty, and fashion accessories have improved somewhat since mid-April, but sales are still down compared to last year. The firm found kids’ apparel, underwear, sleepwear, and shorts all achieved year-over-year dollar growth in May. Swimwear saw week-over-week gains in early June, as well.

Edited’s Kayla Marci, market analyst, said in an interview with the Lifestyle Monitor™, that even with seasons changing and restrictions easing, trends that were popular during the pandemic remain so.

“Sweatpants continue to sell out, going from 6 percent of the sellout assortment of the bottoms category to 11 percent,” she says. “In menswear, it’s 14 percent of sellouts this year versus 11 percent last year.”

Even though certain categories like leggings and sweatpants have sold well, nearly half of all U.S. consumers (47 percent) say they’re buying less apparel for themselves this year compared to 2019, according to the 2020 Cotton Incorporated Lifestyle Monitor™ Survey. More women (52 percent) than men (40 percent) say they’re purchasing less this year. 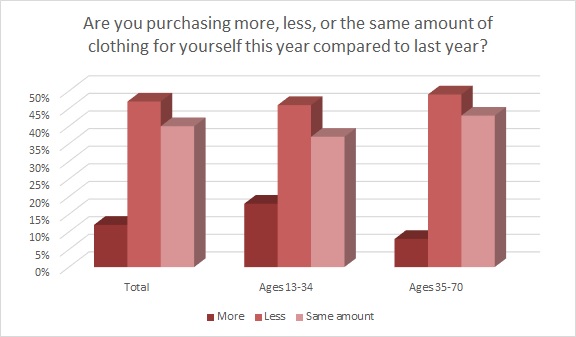 For those who have less to spend on clothes, 38 percent say they’re only purchasing the necessities, followed by a quarter who have stopped buying clothes for now (25 percent) and are waiting until clothes go on sale (26 percent), according to Monitor™ research.

Marci tells the Lifestyle Monitor™ that summer bottoms have increased year-over-year, now that people can go out.

“In the past month, shorts have made up almost half of sell outs within their parent category, ” Marci states. “They are now more popular with consumers than skirts, proving a comfortable option for lounging around the house and for outdoor activities. Similar findings were also reflected in menswear with shorts as the dominant sell out category.”

Marci says less comfortable styles such as jeans and trousers still aren’t resonating well with consumers, adding that both have seen a significant decline in their sell out proportion year-over-year in both men’s and women’s categories.

In a global report, Edited found comfort dressing that included sweatpants and leggings remained strong in Europe, even as lockdown measures eased. Through summer, the firm expects U.S. consumers to turn to jogger/drawstring shorts and create a demand for lightweight loungewear in breathable fabrics.

“The COVID-19 pandemic will pique consumer interest in products with antibacterial fabrics and finishes — an area of untapped opportunity for sport and outdoor gear,” the Edited report advises. “Be sure to highlight these properties to customers in addition to promoting mainstay activewear features such as moisture-wicking and absorbency.”

Further, Marci says, sell outs in dresses have decreased from 20 percent to just 16 percent, proving “consumers still lack the need for ‘dressing up’ as the world reopens.”

Most people still don’t have much of a need for dressing up. It’s estimated more than half of the U.S. workforce (56 percent) holds a job that allows for remote work, at least partially, according to Global Workplace Analytics. Don’t forget movies, restaurants, bars and nightclubs have been closed, and social distancing is still advised, leaving little reason to dress up. Of course, there’s a more grim reason for the disinterest in purchasing more fashion-forward attire: The nation’s employment population ratio was 52.8 in May, meaning 47.2 percent — or nearly half — of the total working-age population was out of work, according to the Bureau of Labor Statistics.

More than two-thirds (68 percent) of U.S. consumers think the country is in or will be in a recession, according to Monitor™ data. And besides buying less than normal, half of them (50%) are using the internet more often than last year to compare prices and find the latest deals.

“The most important thing now is to keep these retail stores open for business and not penalize them by closing their doors in the event of a coronavirus surge,” said the National Retail Federation’s Matthew Shay, president & CEO, in mid-June. Stores that reopened in May showed a 17.7 percent increase over April, but a 6.1 percent decrease from the same period in 2019.

The problem in planning anything was apparent as COVID-19 cases began surging in June in states that reopened and eased restrictions early, such as Texas, Florida, and Arizona. At deadline, pauses or rollbacks for reopening places like restaurants and bars were being put into place — such as New Jersey’s delay in allowing in-restaurant dining. Beaches were also to be closed in areas of California and Florida for the July 4 holiday. But the retail stores, as of this column’s deadline, remained open.

In June, the NRF’s Jack Kleinhenz, chief economist, said even though retailers are ready to meet consumer demand, the country is “likely to remain on a roller coaster for a while.

“What we need to look at is the trajectory of employment and the direction of the virus,” he said. “There’s hope for a turnaround in the economy in the third quarter but if the virus has a reawakening, we’re going to see some serious situations for consumers.”

For now, Marci says in the interview that consumers are responding well to daywear and summer essentials with bodysuits and swimwear selling well as Americans move away from the “quarantine-wardrobe.”

“However,” she says, “it will be interesting to see if this shift continues amid fears of a second outbreak, which could further fuel interest in the loungewear trend.”