This year’s 50th Anniversary of Earth Day was very different from past events. And judging by the ever cleaner air and further emergence of wildlife in unexpected areas, the planet probably didn’t mind that humans observed the event from quarantine quarters. Far more preferable than people gathering by the millions for concerts, marches and rallies, jamming the streets with cars, and leaving behind disposable food and drink containers. Ironic, isn’t it?

But obvious choices are often overlooked in our usually noisy world. Take natural fibers like cotton. When discussing sustainability, designers, manufacturers, and even average people on the street, repeat a snippet of something they heard decades ago that doesn’t reflect reality. Almost like a meme that’s used in place of a fact on Twitter or Facebook. And it’s reached the point where it’s not unusual to hear a well-meaning designer or line rep promote how a new collection includes polyester made from recycled plastic bottles, but almost apologize for using cotton.

It’s not unusual to read on websites or hear industry professionals say cotton uses a lot of water. That’s an oft-repeated comment, but it’s not the reality.

Cotton has been called a “thirsty crop,” but it is actually inherently heat and drought tolerant. The United States Department of Agriculture regulates cotton as a food crop. And according to the agency’s 2012 data, corn accounts for the largest percentage of total U.S. irrigated acreage at 25 percent. That’s followed by hay and other forage products (18 percent), soybeans (14 percent), vegetables (8 percent), orchard crops (8 percent), cotton (7 percent), wheat (7 percent), and rice (5 percent).

Cotton LEADS℠ is a program that connects textile manufactures, brands, and retailers with a variety of ways to advance sustainable cotton production. The program found that in the U.S., the majority of cotton—about 60 percent—is produced without any irrigation and relies solely on rainfall. For the remaining 40 percent, irrigation is only used to supplement crop needs.

Since its founding in 1970, Cotton Incorporated has supported U.S. growers in making significant gains in yield, while reducing the environmental impact of cotton production in general. Besides helping farmers reduce their water usage, Cotton Incorporated has also helped reduce insecticide inputs. Another claim lobbed at cotton farmers is that they use a lot of pesticides to grow their crop. But U.S. cotton farmers make 50 percent fewer pesticide applications than the generation before them, according to Cotton Incorporated. One of the reasons for this significant decline can be attributed to the introduction of Bt cotton in 1996. Bt cotton is an insect-resistant transgenic crop designed to combat the bollworm.

The USDA says studies suggest Bt seeds have both increased yields and reduced insecticide use.
These savings on water and insecticide inputs are also vital to the nation’s farmers. That’s because most cotton growers are not part of “Big Ag,” which is another misconception about the industry. There are actually 16,149 cotton farms in the U.S., according to the USDA (data from 2017). Most of them (65 percent) are family farms, and 24 percent are partnerships. It stands to reason that any savings on water and inputs would mean savings for the individual farmer, so the less that can be used, the better for the bottom line.

Dr. Gary Adams, president and CEO of the National Cotton Council, says sustainability is a personal issue for the country’s cotton farmers.

“They’re farming in a way that not only can they continue to do it for their generation, but the next generation is going to come along and farm that land, as well,” Adams says. “The reality is, we’re not bringing more land into production. We have to rely on technology. We have to rely on conserving resources to meet what is a growing demand base.”

As it stands, nearly 8 out of 10 consumers (77%) say cotton is their favorite fabric to wear, according to the 2020 Cotton Incorporated Lifestyle Monitor™ Survey. And compared to synthetic fiber clothing, like polyester and nylon, 81 percent say cotton apparel is the most sustainable. Additionally, nearly half of consumers (45 percent) say they would be more loyal to clothing brands that offer more sustainable or environmentally friendly clothing. That number jumps to 55 percent among Millennials. 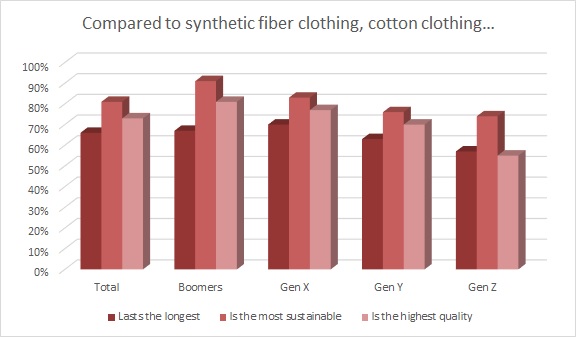 Brands and retailers should also take note that at least two in five consumers say they prefer to pay a slightly higher price to keep cotton from being substituted with synthetic fibers like polyester in their underwear (48 percent), T-shirts (45 percent), casual clothes (42 percent), and denim jeans (42 percent) according to Monitor™ research.

When consumers are done using a cotton garment and it’s reached the end of its life, cotton continues being more eco-friendly than manmade synthetics. That’s because its fibers are made of cellulose, an organic compound that is the basis of plant cell walls and vegetable fibers.

“Earth Day 2020… ,” say the event’s organizers, “must be a historic moment when citizens of the world rise up in a united call for the creativity, innovation, ambition and bravery that we need to meet our climate crisis and seize the enormous opportunities of a zero-carbon future.”