LaQuan Smith sent amazing creations down the runway during his Fall/Winter New York Fashion Week show. His collections are all about empowering women to feel good about themselves via what they’re wearing. And this season it included black, stacked stovepipe jeans with moto detailing and denim bustiers, part of his ongoing collaboration with Jordache.

“I wanted to say something that was really impactful,” Smith told Billboard in an interview about the collection. “What I’m creating with [the line] is something that you want to be a part of. It’s something that has this superstardom aesthetic. That level of confidence is just powerful and it has a lot of value.”

Empowerment, as well as enduring style, is also behind “Rosie Reborn,” a new campaign from Cotton Incorporated that’s inspired by an icon of female strength, Rosie the Riveter. The campaign was unveiled last week ahead of National Women’s History Month in March to honor the strides women have made in the workforce over the past 75 years. It stems from denim’s role as a uniform for barrier-breakers throughout American history, particularly women who entered male-dominated industries.

For those who don’t remember their history lessons, Rosie the Riveter adorned an iconic poster during World War II, and came to represent all the women who went to work in defense factories and shipyards, as the male workers were called to join the military. Wearing a blue denim jumpsuit, hair tucked in a kerchief and her arm held high flexing her muscle, the Rosie poster read, “We Can Do It!”

To honor this tradition and dress a new generation of “Rosies,” Cotton Incorporated has joined forces with THE GREAT., a ready-to-wear brand designed by Emily Current and Meritt Elliott, to reimagine Rosie’s famed denim jumpsuit for the modern woman.

The timing is perfect: Not only are jumpsuits a hot look right now, but the majority of today’s women (83 percent) say they prefer to go places where they can wear jeans, according to the Cotton Incorporated Lifestyle Monitor™  Survey. Most say they prefer to wear jeans at school or class (57 percent), running errands (54 percent), “when I want to express myself” (55 percent), and “when I want to look stylish” (54 percent). 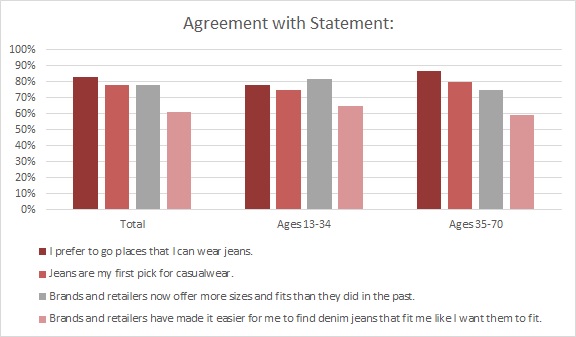 For nearly eight in 10 women (79 percent), denim jeans are their first pick for casual wear, according to the Monitor™  data. And after years of taking a back seat to yoga pants or leggings, most women (80 percent) say brands and retailers now offer more sizes and fits than they did in the past.

This is paying off for the category. A study by The NPD Group found 364 million pairs of women’s jeans were purchased in the 12 months ending February 2019, a nearly 22 million unit increase year-over-year. The firm also reported U.S. women’s jeans sales grew 6 percent to $8.8 billion in 2018, while the overall U.S. jeans market saw a 3 percent increase to $16.3 billion.

Of course, authentic denim is made with cotton, “a can-do fiber” that “embodies the versatility of women in today’s workforce,” according to Kim Kitchings, senior vice president of consumer marketing at Cotton Incorporated.

“Denim has empowered women in the workforce for decades,” Kitchings says. “And with the modern interpretation of the Rosie jumpsuit, we want women to channel that fearless determination.”

While Gen Z and millennials own more denim than Gen X and Boomers (11.1 denim garments versus 9.8), the younger consumers are not as pro-denim as their older counterparts. Nearly half of the younger set (49 percent) say “I have some denim apparel but in general, I don’t wear much denim.” That compares to 37 percent of Boomers and Gen X shoppers, according to Monitor™ research.

To appeal to the younger set, WGSN suggests offering denim in pastels and super-laundered tones, which can be updated with crisp winter whites. They also advise buying denim in browns and greens, in addition to the more traditional black and indigo jeans. Neutrals will also be key, but near-neons and hyper brights will be important as highlights. These tones can be applied to any number of jean styles that are being offered going forward. Reporting from Project Las Vegas, Sourcing Journal saw a variety of denim newness, from paper-bag waists, pleating and looser wide-leg jeans, to high-rise skinny jeans, raw-edge straight leg styles, stepped or fringed hems, and laser-distressed, animal printed, and embroidered denim.

The limited-edition Rosie jumpsuit is just one more item women can add to their denim assortment. On average, women own 10 denim pieces, including six pairs of jeans, two pairs of shorts, a denim jacket and a denim shirt, according to Monitor™ research. With so much to choose from, nearly six in 10 women (58 percent) say they wear denim jeans or shorts at least three times a week.

More than three-quarters of all women (77 percent) say they prefer their denim jeans be made from 100 percent cotton (26 percent) or cotton blended with stretch fibers (51 percent), according to Monitor™ data. More than eight in 10 women say cotton-rich jeans are the most authentic (91 percent), most sustainable (89 percent), the highest quality (87 percent), the most breathable (85 percent), and the most reliable (86 percent).

With the Rosie Reborn campaign tagline, “Cotton Makes Denim Strong. You Make It Powerful,” top of mind, THE GREAT.’s Emily Current and Meritt Elliott were more than just inspired by the original workwear garments.

“Each jumpsuit of the line includes a half-moon patch of denim from a vintage jumpsuit,” say the designers, “connecting Rosies past with Rosies present, and beyond. We wanted to create a legacy with this design.”