When people talk about America the Beautiful, they’re definitely not referring to the 292.4 million tons of waste — which includes more than 17 million tons of textiles — the country generated in 2018, according to the Environmental Protection Agency (EPA). But on November 15, America Recycles Day aims to improve both the country and the planet by encouraging more mindfulness in consumption, promoting the benefits of recycling and explaining how consumers can both “recycle more and recycle right.”

America Recycles Day began in 1994 and is now a Keep America Beautiful program, one that strives to inspire communities and individuals to not only reduce landfill waste, but also conserve natural resources and burn less fossil fuel.

This Denim Startup Was 'Designed to Shut Down'

To help consumers reach that goal, Cotton Incorporated is again incorporating its Blue Jeans Go Green™ program by encouraging a social initiative, the third annual #DenimStackChallenge. Started in 2006, the Blue Jeans Go Green™ program collects old denim, made from high cotton content, so it can be recycled back to its original fiber state and transformed into useful new products such as building insulation, thermal packaging insulation, pet bed inserts, and more. The #DenimStackChallenge tasks consumers to take inventory of their denim, taking pictures of their denim “stacks” and sharing on social media, and then recycling those pieces they can no longer wear.

The Blue Jeans Go Green™ program invites consumers to drop off their old worn cotton denim pieces at participating retailers or local events. When dropping off at stores, shoppers are often given either money toward or a percentage off their next denim purchase. Some of this year’s retailers include Industry Standard, Just Black Denim, Paige denim, PacSun, and Levi’s®.

“As a brand dedicated to inspiring positive development with fashion, we firmly believe that small changes today will result in a better tomorrow,” said Brie Olson, President of PacSun. “We are excited to introduce PacDenim for Good as a continuation of our journey to a more sustainable future.”

More than 2 out of 5 consumers (43 percent) say they donate their old jeans they no longer plan to wear, according to the 2020 Cotton Incorporated’s Lifestyle Monitor™ Survey. That’s followed by 18 percent who plan to give them away, 12 percent who intend to throw them away, and 9 percent who expect to re-use them in a different way, such as for cleaning rags or craft projects. 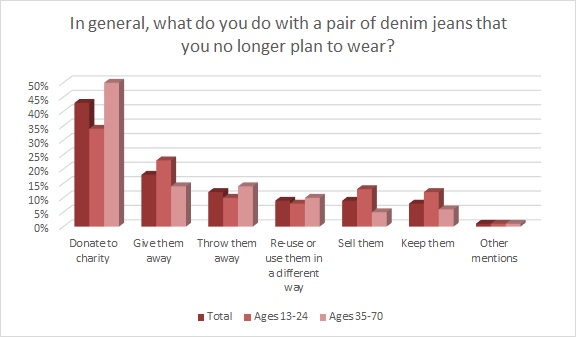 But brands and retailers should note that nearly 70 percent of consumers say they are or would be interested in donating their old denim jeans/garments to be upcycled into housing insulation that is given to programs like Habitat for Humanity, according to the Monitor™ research.

The majority of consumers (38 percent) say they would be most influenced to donate their old denim if a nearby retailer would accept denim for upcycling, according to the Monitor™ research. They would also be inclined to contribute if retailers offered a discount on new denim in their stores (36 percent). Another 33 percent say they would be inspired to give up their jeans if they received more information about denim upcycling and its environmental benefits, while 32 percent said they’d donate if they could mail their denim contribution to the brand/company for free.

Consumers who wish to recycle by mail are in luck. In 2019, Zappos for Good joined the Blue Jeans Go Green™ program and has since encouraged denim owners to pack their items (up to 50 pounds and should contain at least 90 percent cotton denim) in any shipping box they have. Zappos for Good supplies prepaid shipping labels consumers can print out and attach to their boxes, which can then be dropped off at any local Continental U.S. UPS store or drop off location.

Community denim drives in neighborhoods and offices are also held as part of the Blue Jeans Go Green™ program. And denim collections are held at K-12 schools, colleges, and universities. More than 100 educational organizations have helped collect more than 300,000 pieces of denim. This year, in collaboration with The Week Junior, the Blue Jeans Go Green™ program is inviting children ages 8-to-14 to design a recycling-inspired T-shirt that represents what “doing good in denim” means, or how old denim could be reused or recycled to help the planet.

Cotton Incorporated’s denim recycling program is far-reaching and looks to involve as many consumer demographics as possible.  By promoting action and advocacy, Cotton Incorporated seeks to harness the collective power of community to build a bridge between sustainability and circularity, returning old denim to its original cotton state and renewing it through the many possibilities of recycled denim.