Despite divisions that seem to make headlines everyday, America continues to be the melting pot of the world. And while momentum has slowed, the U.S. Hispanic population is steadily growing in influence and consumption.

For fashion brands, that means connecting at a deeper level is crucial in order to tap into a strong and potentially lucrative market.

During a webinar Kantar held regarding its 2018 U.S. Monitor research, Valeria Piaggio, senior vice president and head of polycultural insights, said the Hispanic market should be considered the “silent growth engine” for business.

“In terms of population, Hispanics are a fifth of the entire U.S. population,” Piaggio said. “Every single state in the country has a city where Hispanics are the majority. [Their] population growth is shaping the U.S. demographic make-up and its future.”

The Hispanic market’s buying power will reach $1.8 trillion by 2021, according to Kantar research.

That buying power comes from the fact that 64.4 million Hispanics currently live in America, an 83 percent growth since 2000, according to the 2019 Claritas Hispanic American Market Report.

Even though growth has slowed from an average of 3.4 percent per year to 2 percent since 2010, according to Pew Research, population increases among Hispanics outpace all other groups except Asians, who have maintained a 2.8 percent growth rate.

But a decrease in growth has not been detrimental to apparel spending. On average, Hispanic consumers spend about $104 per month on clothes, according to the Cotton Incorporated Lifestyle Monitor™ Survey. That’s 27 percent more than the $82 per month spent by non-Hispanics. It helps that nearly two in three Hispanics say they “love or enjoy” clothes shopping (67 percent), which is significantly higher than non-Hispanics (53 percent).

Everlane Secures $25 Million Loan for Next Stage of Growth

And when it comes to their favorite fabric to wear, 79 percent of Hispanic consumers place cotton at the top, according to the Monitor™ research. This far outpaces polyester (3 percent), silk (2 percent) and rayon (1 percent). 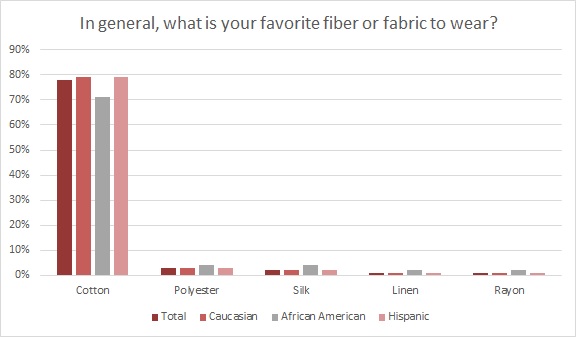 What’s more, nearly four in five Hispanic consumers (78 percent) say better quality clothing is made from cotton, according to Monitor™ research. And three-fourths (75 percent)—significantly more than the two-thirds of the overall population—are willing to pay more for clothes made from cotton.

Connecting with the Latino population can have far-reaching results for brands and retailers, considering that Pew Research finds they are among the youngest racial or ethnic groups in the U.S., with a median age of 30 in 2018. Pew compares that to 44 years old for whites, 37 for Asians, and 34 for blacks.

Generally, Hispanics spend about 112 minutes each month shopping for clothes both in-store, according to Monitor™ research. That’s about 11 percent more than the 101 minutes for non-Hispanics.

And according to a study by Motionpoint, a tech solutions firm that specializes in website translation and localization, even when purchasing in-store, more than 80 percent of Hispanics use their mobile device to conduct product research.

However, Kantar’s research found few brands are effectively engaging Hispanic consumers. Overall, 59 percent of Latinos think brands are not adequately representing them in their campaigns. That figure rises to 66 percent among Hispanics aged 12-to-22. Additionally, 66 percent think brands treat them like an afterthought, which is significantly higher than 56 percent of all consumers.

“If you don’t treat Hispanic consumers as an afterthought, but address them at the beginning of the marketing process, you will not only save money but you’ll have a real comprehensive picture of where your brand stands with the consumer,” said Roberto Ruiz, Univision’s executive vice president of research, insights and analytics, during the Kantar webinar. “So, start the marketing process with Hispanics in mind and keep this throughout the process.”

Additionally, in reaching Hispanics, brands are actually reaching other cultures. Kantar’s research found that 70 percent of Hispanics are bilingual, 46 percent are multiracial, and 40 percent live in a multi-racial household.

“If your brand is in retail, you have to be thinking about what you’re doing with Hispanic consumers,” Ruiz said.

“Hispanics are spending in many categories, so when you evaluate your brand’s performance, you need to keep this in mind,” Piaggio said. “You also need to analyze the growth potential of Hispanics and what it could do for your brand, and you have to invest accordingly.”