It’s that scary time of year again. No, not Halloween. We’re talking about pre-holiday, the anxiety-laced period that retailers and manufacturers have been prepping for, despite being before consumers have truly begun shopping.

Experts have good news though. Despite another year of store closures, the shopping season should produce positive results.

“Expectations are for a good, healthy sales performance during the 2018 holiday season, but not quite as strong, growth-rate wise, as in 2017,” said The Retail Economist’s Michael Niemira, chief economist. He says year-to-date trends are pointing to a 2.6% increase over 2017, which saw a 3 percent jump over the previous year.

“The two-year 2017 and 2018 performance is healthy, too,” Niemira said. “The underlying economy, including low unemployment, high consumer confidence, etc., is propelling consumer spending. Given the strength in 2017, however, the industry faces a somewhat tougher year-over-year comparison, which is likely the key reason for sales growth just under last year’s holiday performance.”

UK Retailers Fared Better Than Expected After a Tumultuous Holiday

“Our estimate is well above the 2.8% average seen over the last 10 years; that 10-year average includes the global financial crisis and is based on data from the National Retail Federation (NRF),” Coresight noted.

Overall, consumers expect to spend $679 on holiday gifts this year, significantly up from the $571 they planned to spend in 2017, according to the Cotton Incorporated Lifestyle Monitor™ Survey. That’s a 19 percent jump. 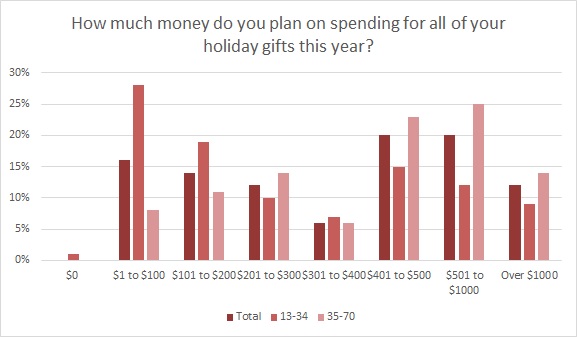 Coresight Research points out rising wages, moderate overall inflation (despite rising gas prices) and income tax cuts have helped boost consumer sentiment to 55.5% in August, up from 55.3% in July.

Even with all the new tech gifts and interest in experiences versus things, retailers should expect apparel to sell well this season. On average, holiday shoppers plan to spend $412 on electronics, $275 on experiences like vacation or activities, $241 on clothing, $189 on gift cards, and $175 home textiles, according to Monitor™ research. About 67 percent are planning on spending the same on apparel, while 20 percent are spending more and 13 percent expect to spend less.

“I expect the clothing and accessory sales to be relatively strong this year, which is a combination of a number of factors,” Niemira said, adding, “This segment often has a roller-coaster performance and last year’s 1.7% pace was soft, helping to boost this year’s demand. Secondly, prices may be firmer as a whole, which could boost nominal sales as well. Inventories are relatively low for apparel going into the season. That should help pricing, which has been weak at mid-year.”

Early optimism for the season bears out in the fact that even though Halloween is weeks away, 15 percent of consumers say they plan to shop for holiday gifts in October, according to Monitor™ research. The greatest share (27 percent), begin their shopping in November, followed by 14 percent who wait until December.

“Typically, the TRE-GS (The Retail Economist-Goldman Sachs) surveys suggest that the season really gets underway by Halloween,” Niemira says. “Although the percentage of holiday sales is small at that point, consumers seemingly do buy something for the season by then. I expect that this year will not be much different.”

The regular stores sales and internet deals that have become a hallmark of the holiday season have somewhat reduced the intensity of Black Friday, the day after Thanksgiving. But that doesn’t mean it’s not important. Nearly half of all consumers (49 percent) plan to shop online and 41 percent plan to shop in-store on Black Friday, according to Monitor™ research.

Coresight expects e-commerce to capture one of every five non-food dollars in the holiday quarter, and one-fifth of all apparel sales. The Monitor™ survey shows some top online shopping holidays include Cyber Monday, when 45 percent of consumers expect to shop, and December’s National Free Shipping Days, when 23 percent plan to buy gifts.

Strong in-store shopping days include the week leading up to Thanksgiving Day, when 26 percent of consumers plan to shop for gifts, as well as after Christmas (16 percent) and Small Business Saturday (15 percent), according to Monitor™ research.

Thanksgiving Day shopping has become something of a lightning rod topic, with some consumers saying the day should be sacrosanct and spent entirely with family, while others say shopping offers a break from family and a chance to walk off the turkey dinner. This year, 18 percent of shoppers plan to shop online on Thanksgiving, while 14 percent plan to shop in-store, according to Monitor™ research.

Despite the overall positive outlook, there are growing concerns that tariffs between the U.S. and China could have a negative impact on the season.

Walmart in particular is sounding an alarm. The company sent a letter to the U.S. Trade Representative noting the tariffs will force customers to face “cost increases for cost increases for essential items like car seats, cribs, backpacks, hats, pet products and bicycles. Either consumers will pay more, suppliers will receive less, retail margins will be lower or consumers will buy fewer products or forego purchases altogether.”

But Niemira doesn’t think the season will feel much of an overall impact.

“I have seen some projections from Goldman Sachs that suggest that the tariffs could add about 0.1 percentage point to inflation,” he said. “Not much to worry about to curb consumer demand.”

This article is one in a series that appears weekly on sourcingjournal.com. The data contained are based on findings from the Cotton Incorporated Lifestyle Monitor Survey, a consumer attitudinal study, as well as upon other of the company’s industrial indicators, including its Retail Monitor and Supply Chain Insights analyses. Additional relevant information can be found at CottonLifestyleMonitor.com.