This holiday season, retailers have 1,440 minutes per day, or 37,440 minutes total between Thanksgiving and Christmas. And every one of those minutes will really count, as there are six fewer days between the two major holidays this year. But the shorter selling season is expected to be buoyed by a still-strong economy and consumers who are willing to spend, especially after Christmas Day.

It’s expected that stores will pack a lot of business into less than 4 weeks, as Deloitte predicts retail sales will increase between 4.5 percent and 5 percent for holiday 2019. Deloitte also forecasts digital sales to grow 14–to-18 percent this season, which is a significant increase over 2018, when sales grew 11.2 percent. The firm predicts e-commerce holiday sales of $144 billion-to-$149 billion.

“The projected holiday season growth is, in part, due to the current health of the labor market,” Daniel Bachman, Deloitte’s U.S. economic forecaster, said in mid-September. “Near record-low unemployment rates, coupled with continued monthly job creation, may encourage people to spend more during the holiday season. The economy is still growing, albeit at a slower rate. Additionally, we continue to see consumer confidence elevated, which also helps boost holiday spending.”

On average, holiday shoppers plan to spend about $758 on gifts this year, up 12 percent compared to $679 last year. 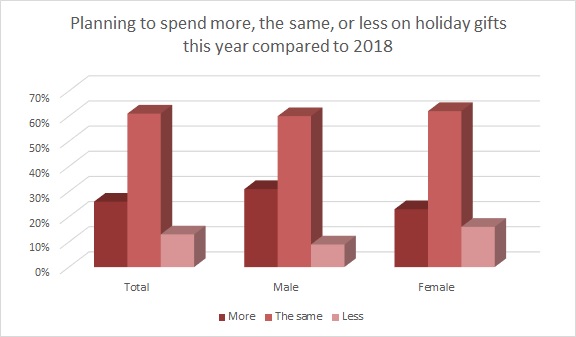 This is despite a slight decline in the Conference Board Consumer Confidence Index, which stood at 125 in September, down from 134 in August.

“Consumer confidence declined in September, following a moderate decrease in August,” said Lynn Franco, senior director of economic indicators at The Conference Board. “Consumers were less positive in their assessment of current conditions and their expectations regarding the short-term outlook also weakened. The escalation in trade and tariff tensions in late August appears to have rattled consumers.”

The Trump administration delayed tariffs on some consumer products from China until December 15, including certain items of footwear and clothing, like baby garments, scarves and gloves, and coats.

In a statement after the Trump administration announced the tariff delay, the National Retail Federation (NRF) expressed concern tariffs could start to have an effect on everyday shoppers.

“We are pleased the administration is delaying some tariffs ahead of the holiday season and acknowledging the impact on American consumers,” said the NRF’s David French, senior vice president for government relations. “Still, uncertainty for U.S. businesses continues, and tariffs [that took] effect Sept. 1 will result in higher costs for American families and slow the U.S. economy.”

Nearly two-thirds of holiday shoppers (61 percent) say they’re aware of the current tariffs that have been placed on Chinese goods, according to Monitor™ research. Of those who are aware, 27 percent say the tariffs will affect their holiday purchasing decisions. About one-third (35 percent) say they will spend less due to the tariffs, while 38 percent will spend the same, and 27 percent will spend more. Despite this, overall spending is anticipated to be up.

Once again, apparel tops the holiday gift-giving list. About 3 in 5 shoppers (57 percent) say they plan to buy clothes as a present this season, followed by gift cards (52 percent), toys (48 percent, up significantly from 39 percent in 2018) and electronics (32 percent), according to the Monitor™ survey. When shopping for apparel, more than half of all consumers (51 percent) look for cotton-rich clothing gifts. Additionally, more than three-fourths of apparel gift givers (76 percent, up from 60 percent in 2017) plan to seek out clothes made from natural fibers, according to Monitor™  data, and 63 percent say they will pay a premium for it.

Retailers should be prepared for the fact that consumers will be engaging in a lot of online shopping deals on Cyber Monday (53 percent) and Black Friday (52 percent), according to Monitor™ research. They also expect to do some online shopping during (mid-December’s) National Free Shipping Day (24 percent), the week leading up to Thanksgiving Day (20 percent), Thanksgiving Day (15 percent), after Christmas (14 percent), Green Monday, or the second Monday of December (13 percent) and even Christmas Eve (11 percent).

However, consumers already made a lot of digital purchases back in July on Amazon Prime Day (39 percent).

While online shopping is certainly convenient during the holidays, plenty of consumers will be heading to stores, according to the Monitor™ survey, especially during the well-known shopping days: Black Friday (43 percent), the week leading up to Thanksgiving (26 percent), Small Business Saturday (19 percent), Christmas Eve (13 percent), after Christmas (13 percent) and Thanksgiving Day (12 percent).

“The Thanksgiving Day weekend—including Black Friday, and the Saturday after Thanksgiving, Nov. 30—will continue to be crucial span days for all U.S. retailers as they approach the holiday season,” said Bjoern Petersen, president at Sensormatic Solutions.

He added, “Our historical analysis also suggests that, because there are only three Saturdays in December leading up to Christmas this year, Boxing Day (Dec. 26) will play a more prominent role in the U.S. It represents another major day consumers are off from work and can shop and/or return items they purchased or received.”