After some fears that trade tariffs and a shorter purchasing period might affect 2019’s holiday sales, it turned out stores and brands could breathe a sigh of relief. While not as strong as some had forecast, the holiday was respectable, with online sales showing yet another significant jump.

“E-commerce sales hit a record high this year with more people doing their holiday shopping online,” Steve Sadove, senior advisor for Mastercard, and former CEO and chairman of Saks Incorporated, said. “Due to a later than usual Thanksgiving holiday, we saw retailers offering omnichannel sales earlier in the season, meeting consumers’ demand for the best deals across all channels and devices.”

As e-commerce becomes simpler, more consumers are scrolling their screens than strolling the streets. Prior to the holiday, 56 percent of gift givers planned to purchase apparel gifts online, which was up significantly from 36 percent last year, according to the Cotton Incorporated Lifestyle Monitor™ Survey. Additionally, just 44 percent planned to shop for clothing gifts in-store, down considerably from 64 percent in 2018. The leap in digital shopping meant in-store traffic decreased 4 percent during the all-important and traditionally crowded Black Friday weekend, according to a Sensormatic Solutions ShopperTrak recap.

Bill to Avert Rail Strike Passes House, On to Senate 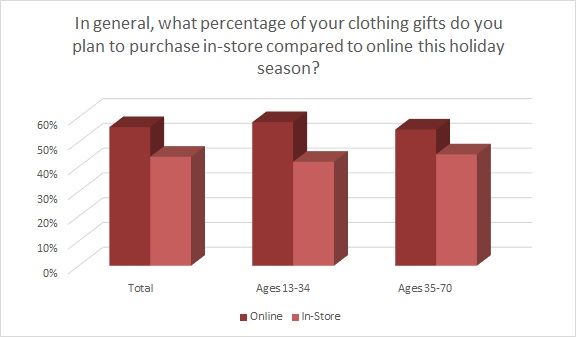 While the season ended on a positive note, holiday sales missed Deloitte’s optimistic forecast of 4.5-to-5 percent, coming closer to the lower end of the National Retail Federation’s prediction of a 3.8-to-4.2 percent rise in spending.

The SpendingPulse survey showed apparel sales increased 1 percent over last year, and it’s e-commerce growth leapt 17 percent. Not surprisingly, Amazon was partly responsible for that increase. Amazon said it had its biggest holiday season yet, with billions of items shipped and 5 million new customers worldwide who either started Prime free trials or paid for new memberships. Fashion items were best sellers for the online retailer, with Carhartt, Champion, adidas, and Amazon Essentials among the most popular brands.

Apparel has been and continues to be a traditional gift during the holidays. Roughly three in five shoppers (57 percent) said they planned to buy apparel presents during the 2019 season, according to Monitor™ research. That was followed by gift cards (52 percent), toys (48 percent), electronics (32 percent), and fashion accessories (31 percent).

Additionally, nearly two-thirds of consumers (65 percent) said they would like to receive clothes as a gift during the holiday season, according to the Monitor™ research.  Those under the age of 35 were significantly more likely than their older counterparts to want apparel gifts (75 percent versus 57 percent).

Even though overall sales were up, the SpendingPulse survey found department stores saw a decrease of 1.8 percent overall, despite their online sales experiencing an increase of 6.9 percent over 2018. Shoppers instead turned to mass merchants like Walmart and Target, which enjoyed strong Black Friday sales, thanks to in-store foot traffic, according to analysts. That tracks with Monitor™ research that said most shoppers (61 percent) planned to shop for clothing goods at mass merchants, followed by online only sites like Amazon (50 percent), chain stores (46 percent), department stores (41 percent), off-pricers (38 percent), and specialty stores (38 percent).

Super Saturday (December 21, the last Saturday before Christmas) was the biggest shopping day in U.S. history, as reported by Bloomberg News, with sales reaching $34.4 billion dollars, according to Customer Growth Partners. But Super Saturday foot traffic was down 9.7 percent from last year, according to Sensormatic Solutions ShopperTrak data.

Overall, 24.5 percent of online holiday sales took place over Cyber Monday, while 15.4 percent occurred on Black Friday, according to the SpendingPulse survey.

Retailers were likely ready for the strong online showing. Prior to the holiday, 53 percent of gift givers said they planned to buy online during Cyber Monday, according to the Monitor™ data. This was a significant increase from 2018, when 45 percent planned to use ecommerce. Further, the Monitor™ found 52 percent of shoppers planned to buy gifts on Black Friday, while another popular shopping day was Amazon Prime Day (39 percent).

Stores should also have been ready for BOPIS (buy online/pickup in-store) shoppers, especially those residing in cities. The majority of holiday shoppers (59 percent) said they planned to take advantage of “ship to store” options, according to Monitor™ research. Additionally, research from The NPD Group showed 28 percent of urban shoppers were planning to shop online and collect their package in-store, as well as have packages delivered to a locker or inside their home.

“The growth in online shopping has increased the importance of understanding how a consumer’s location impacts their shopping behaviors,” said Marshal Cohen, chief industry advisor, The NPD Group. “Retailers need to understand how behaviors between rural and urban shoppers differ in order to reach each of these shoppers with relevant marketing messages, especially throughout the competitive holiday shopping season.”

This past holiday season may have seemed extra competitive since Thanksgiving fell on November 28. This later-than-usual date gave shoppers one week less than in 2018 to fit in their gift buying.

“The shortened calendar likely drove more consumers to shop online,” commented Coresight Research’s Deborah Weinswig, CEO and founder. “That said, many of the challenges retailers faced in 2019 will likely continue into 2020. E-commerce continues to take share from physical retail, while a host of direct-to-consumer brands are busy building relationships directly with consumers.

“There is a silver lining,” Weinswig stated. “Old-school retail is adapting to e-commerce encroachment and getting more in tune with shifting consumer tastes, so the survivors should be better able to compete.”