This Labor Day marks the 125th anniversary of the national holiday that celebrates and honors the American worker. For a lot of people, it’s a day that symbolizes the end of summer, marked by a trip to the beach, a barbecue, or a day of shopping sales. But it began as an observance of the nation’s labor force, and all that it produced here.

For most of the apparel industry, that has all changed, with production taking place around the world. Perhaps that’s why the brands that still produce in the U.S. feel a sense of pride about it—and believe their customers do, too.

“There is a consumer out there who does appreciate a Made in the USA product,” Dickies director of trend development and chief brand archivist, Ann Richardson, said at the recent Liberty Fairs show in New York, where she showcased the Dickies 1922 Archival Collection, which is handcrafted in Texas. “Just a small portion of our production is in the USA. And basically, that’s who this line is directed toward…But there is a consumer out there seeking out USA-made product. They’re looking for quality and heritage. And they have a loyalty to the heritage of the American worker.”

Finding clothes that are made in the U.S. is almost like finding a needle in a haystack. During the 1960s, roughly 95 percent of all apparel sold in the U.S. was also made here, according to the American Apparel & Footwear Association (AAFA). By 1993, a little more than half (52 percent) was manufactured in the U.S. Currently, 97 percent of all clothing and 98 percent of all footwear is imported.

Despite this dearth of U.S.-made apparel, more than half of all consumers say it is important that the clothes they buy be “made in the USA,” according to the Cotton Incorporated Lifestyle Monitor™ Survey. Nearly three in four consumers (74 percent) say they check the country of origin information at least some of the time before they purchase their clothes. More men than women do so (78 percent versus 72 percent). And those over age 35 are more prone to check than their younger counterparts (79 percent versus 67 percent). 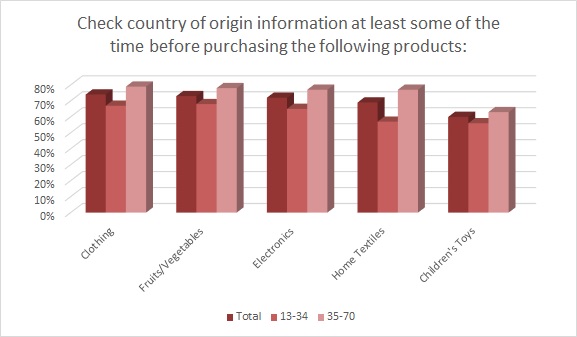 Marine Layer director of wholesale Andrew Graham, said 50 percent of the brand’s line is made in the U.S., and the other 50 percent is made overseas.

“All of our knits—our T-shirts, our long sleeve tees, and all of our fleece—are made in the U.S.,” he said during Liberty Fairs. “The story of our brand actually originated in Los Angeles. We’re based in San Francisco but our founder [Michael Natenshon] was doing some spring cleaning with his girlfriend at their San Francisco apartment. She came across his old favorite T-shirt that had some holes in it. So she decided to throw it away. He then went to L.A. to try and remake that shirt so that it felt like his old favorite from the first time he put it on.”

Natenshon came up with a cotton blend fabric that, 11 years later, is still used for Marine Layer’s tees. And they’re still made in Los Angeles.

“We get this consistent, really well-made product that we feel really confident in,” Graham said. But it was hard to keep all production in the States. “For the first five years of our brand, we tried to make everything in the U.S. But it got to the point where, as we expanded into new categories, the cost of the product and the quality didn’t align. So we explained that to our customer and were very transparent about it.”

For those consumers who say clothing “made in the USA” is important to them, nearly three-fourths (71 percent) say it’s because they want to support the U.S. economy, according to the Monitor™. This is followed by their belief that clothes made in the U.S. are better quality (53 percent), and their feeling that buying clothes made domestically is more environmentally friendly (37 percent).

“It has a lot more environmental impact when something is going on a boat across the ocean,” Graham said. “So, from that standpoint, it’s great that we make so much here. Also, because we visit our factory so much more often in L.A., we know that they’re meeting our ethical and code of conduct standards, as well.”

More than half of all consumers (53 percent) say it’s “very or somewhat important” that clothing brands are transparent about their manufacturing practices, according to Monitor™ research. Additionally, 51 percent of consumers say they’re “very/somewhat more likely” to shop a clothing brand that honestly communicates about its environmental and societal impacts, compared to one that doesn’t.

The Dickies 1922 Collection was produced in Uvalde, Texas, just 350 miles from Fort Worth, where the company began nearly a century ago. The 1922 Collection pays homage to that heritage by featuring garments from its archives. The collection had been available only to select boutique retailers, but is now available on Dickies.com. The pieces, from shirts to jeans to jackets, are nearly all 100 percent cotton.

“That’s what we were running then,” Richardson said, referring to the pieces worn by the American workers of the early 20th Century. “All-cotton is part of the story. Vintage work wear would have been made when they only had natural fibers. And the only natural fibers are linen, wool, silk and cotton. You could make some thing out of wool, certainly, if you lived up north and needed a heavier jacket. Silk was not for workwear. And while linen is strong, it wasn’t part of the picture in American workwear. But cotton is a wonderful thing.”

The Dickies 1922 collection distinguishes not only where the pieces are manufactured, but also whether the fabric is from the U.S. or elsewhere.

It’s notable that Dickies includes this information because consumers are also interested in knowing more about the fabric used in making their apparel.

Part of the appreciation for U.S.-grown cotton stems from expectations around quality. Nearly eight in 10 consumers (79 percent) say they have high quality expectations for U.S. cotton, according to the Monitor™ survey. This is significantly higher than their expectations for cotton produced in other countries, such as Egyptian cotton (69 percent), Australian (50 percent), Turkish and Brazilian (47 percent), Indian (46 percent), and African (45 percent) cottons.

“We raise a lot of cotton in this country. And really until the ’70s and ’80s, we made a lot of apparel here, too,” Richardson said. Looking around at some of the other booths at Liberty Fairs, she added, “A lot of these young guys are interested in craftsmanship and skills, so they’re trying to bring some of that back—making product here in the U.S. “