Independence Day brings the country together to cheer all things American. And while the textile industry can, despite COVID, celebrate an increase in stateside manufacturing, apparel makers have continued to offshore their manufacturing, save for a handful of categories. But at a time when the fashion industry is still recovering from the losses suffered during the pandemic, makers and retailers could benefit from manufacturing at least some of their clothes in America.

“Consumer surveys consistently show over 90 percent of consumers  [expressed] a favorable or somewhat favorable view of ‘Made in USA’ products,” Grymes Thompson says in a webinar regarding “Made in USA” claims. “A lot of people think it’s to help the economy, or to otherwise support their local community. Some people also think they would get better quality while recognizing they might pay a premium for that better quality or, at least, perceived better quality.”

Post-Covid, McKinsey & Company says it benefits retailers and manufacturers to move at least some production closer to home.

“Part of being resilient is building an agile network of suppliers and partners,” McKinsey states. “Certain major nondiscretionary retailers are diversifying their supply chains to mitigate dependencies on geographically concentrated suppliers. Retailers dependent on offshore production might explore alternative sources and locations, perhaps developing manufacturing capacity closer to core markets. Rethinking production footprints could help drive down risk while providing new value propositions for product that are sourced or made locally.”

Consumers are mostly likely to say they always/usually purchase clothing marketed as made in the USA (45 percent), according to the Cotton Incorporated Lifestyle Monitor™ Survey. That’s followed by clothes marketed as sustainable (30 percent), environmentally friendly (24 percent), or recycled (20 percent). And nearly half (47 percent) say knowing whether or not an item is made in the U.S. is an important factor in their clothing purchase decision.

About 1 in 5 consumers (19 percent) believe country of origin contributes to how long an item of apparel will actually last, according to the Monitor™. Further, nearly 3 in 4 shoppers (74 percent) say they check the country of origin information at least some of the time before purchasing clothes. Those aged 35-to-70 are significantly more likely than their counterparts to check a garment’s country of origin (79 percent vs. 67 percent). 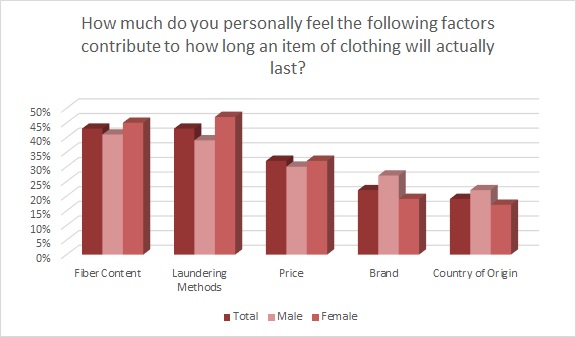 The University of Delaware’s Dr. Sheng Lu, associate professor in the department of fashion and apparel studies, says it’s not unusual to find clothes labeled, “Made in the USA with imported fabric.”

“Statistical analysis shows a strong correlation between the value of U.S. apparel output, and U.S. yarn and fabric imports from 1998-to-2019,” Lu says. “Textile products had accounted for over 66 percent of the total output of the U.S. textile and apparel industry as of 2019, up from only 58 percent in 1998.

U.S.-made textiles and apparel that are growing particularly quickly in some product categories are high-tech driven, Lu says, “such as medical textiles, protective clothing, specialty and industrial fabrics, and non-woven. These products are also becoming the new growth engine of U.S. textile exports.”

While Grymes Thompson said consumers often think “Made in USA” correlates with job restoration, Lu says that hasn’t been the case of late: From January 2020 to January 2021, employment in the apparel industry dropped 13 percent, while jobs in textile manufacturing fell 9 percent.

A service from SoftWear Automation aims to help fashion brands and retailers that would like to begin or increase production in the U.S.  Sewbots-as-a-Service allows manufacturers, brands, and retailers to rent Softwear’s fully automated sewing workline. The idea is U.S.-based companies could source and manufacture in the U.S. at a lower cost than outsourcing, and with greater predictability and quality.

“Those retailers that are thinking big and bold — taking a clean sheet view of their supply chains, making big strategic bets to reshape the supply chain’s role in value creation — can position themselves to thrive over the long term,” McKinsey states. “Creative problem solving that accepts constraints on capital availability as a given can help narrow the focus on finding flexible alternatives—and not just survive, but win.”