American malls are in the middle of cleaning out their proverbial overstuffed closets.

Most people know how that goes: They have to weed out what they don’t want anymore, keep what still works and then make room for new additions. But “retail housekeeping” doesn’t have the same dramatic ring as “retail apocalypse,” so doomsday headlines keep rearing their heads. However, experts are bullish on the future of this American shopping tradition.

“The retail apocalypse is a bunch of nonsense,” said Sageberry president Steve Dennis, speaking at the recent Retail Innovation conference in New York. “There’s actually still a lot of physical stores being opened. In some cases by big retailers.”

It’s hard to say physical retail will fully abdicate to online shopping, he pointed out, when 85 percent to 90 percent of all retail is still done in brick-and-mortar stores. The problem is when traditional retailers can’t figure out what they want to be, so they end up with middling stores that don’t entice anyone.

“Physical retail isn’t dead. It’s really boring retail that’s going out,” Dennis said. “Being boring and undifferentiated, more and more, is a place you can’t be. So the choices are, on the one hand, try and optimize the buying process: be about incredible convenience, great price, fast assortment, and those sorts of things. The other direction is to really go towards experiential shopping and trying to be more special. The challenge for many retailers is they end up straddling the middle and not being good at anything. Or they try to out-Amazon Amazon. And that is a very, very dangerous strategy for almost everybody. So you really need to pick a strategy that takes you from boring to remarkable and differentiated.”

Like the rest of retail, malls need to evolve. More than one-third of consumers (37 percent) say they’re shopping for apparel less often in malls compared to a few years ago, according to the Cotton Incorporated Lifestyle Monitor™ Survey. One reason for that is more than one-third (35 percent) are shopping in department stores less often.

The Omnichannel Dilemma: Will Pandemic-Era Investments Pay Off? 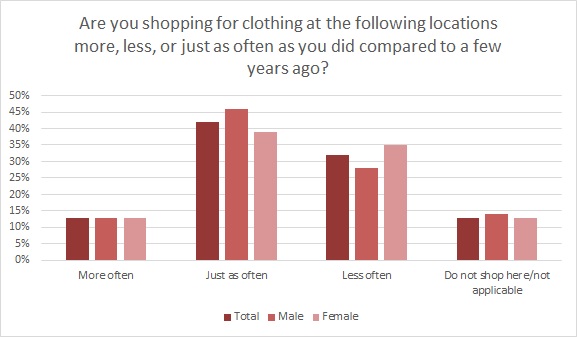 However, the good news is the majority of consumers do go clothes shopping at the mall just as often (42 percent) or even more (13 percent) than they used to, according to Monitor™ research. Additionally, nearly a quarter of consumers (24 percent) shop for most of their clothes in malls, second only to individual/freestanding stores (38 percent).

To draw more visitors, mall operators should note that consumers would be more likely to shop in a mall that offers popular restaurants, coffee shops and bars (46 percent), according to Monitor™ data. They would also like to see malls with stores that sell products other than clothes, such as groceries, cleaning or household supplies (39 percent), and dedicated places to hang out with family and friends (38 percent).

Many of these suggestions are being incorporated into new centers like Triple Five’s American Dream Meadowlands mall in East Rutherford, NJ, which is scheduled to open in 2019.

Standing adjacent to MetLife Stadium, Triple Five is promising a staggering destination that will be 55 percent entertainment, 45 percent retail. The 3-million-square-foot space will feature the first DreamWorks indoor water park, a Nickelodeon Universe indoor theme park, an indoor NHL-sized ice rink, a performance theater, a luxury dine-in movie theater, an observation wheel as tall as the Statue of Liberty, an aquarium, and an indoor ski/snowboard slope. There will be more than 100 eating establishments, from full-service restaurants to a gourmet food hall to a champagne and caviar bar. Visitors will find a spa, health club and hotel. And, of course, there will be retail stores.

Lord & Taylor and Saks Fifth Avenue will serve as anchors to American Dream Meadowlands. Then there will be stores mixed in with the attractions. For instance, those heading to the snow park will enter a “mountain resort,” replete with restaurants and boutiques. There will also be a luxury retail wing, flagship stores for popular brands, as well as space for pop-up shops and up-and-coming designers.

The incredible plans for the American Dream Meadowlands center belies the fact that there were 7,000 store closings in the U.S. in 2017, according to Coresight Research, formerly Fung Global Retail & Technology. And while there are roughly 1,100 malls still operating, Credit Suisse estimates 25 percent of them may close within the next five years. Online shopping, of course, played a part in that. As has the widening wealth gap. Analysts point out that healthy malls often have an abundance of high-end designer stores filling their halls.

In its three-part report “The Mall Is Not Dead,” Coresight Research explains malls are classified from A-to-D in the retail real estate industry, based on sales per square foot, with A being the highest. It expects closures to be concentrated among weaker C and D regional malls.

Currently throughout the country, however, mall occupancy rates remain high, even in the low-ranked regional malls. Coresight says occupancy rates are 94.5% among super-regional (800,000 square feet or more) malls, while regional malls have a 91.3% rate. The report points out that while 270 class A malls constitute just 20 percent of the market, they generate 72 percent of all malls sales. This difference in market share exemplifies why the firm believes the U.S. is “overmalled,” and 30 percent of shopping centers actually need to be closed.

Instead of too many malls with too much sameness, Coresight expects centers to move from a focus on apparel stores clustered around anchors, to more diverse places that include non-apparel retailers, leisure and entertainment tenants, event and pop-up spaces, and business service providers. By 2023, Coresight expects consumers will be redirecting an additional $78 billion in spending to discretionary services at the expense of discretionary goods, over and above the $139 billion already being spent on services.

Some shopping centers are already reflecting the Monitor™ respondents’ desire for places to hang out with family and friends. The Palisades Center in Upstate New York includes attractions like a bowling alley, comedy club, and indoor rope climbing. And the Danbury Fair Mall, one of New England’s largest shopping centers, plays host to weekly concerts with its SummerStage series. Besides music, attendees can enjoy fireworks and food trucks. And outlet malls like Sawgrass Mills appeals to the 55 percent of Monitor™ respondents who plan to shop just as often or more at outdoor shopping centers.

“Many forward-thinking mall operators and real estate owners are already reshaping their tenant mixes,” says Coresight. “Those property firms that are proactively dealing with market shifts by broadening their range of tenants now—rather than simply reacting to apparel store closure programs and bankruptcies as they arise—look set to be the most resilient as the apparel market shifts further.”