While a visit with Old St. Nick used to be one of the biggest draws a mall would offer during the holidays, mall culture has greatly changed over the years. A steep decline in foot traffic has made a visit for holiday shopping downright enjoyable if you’re a consumer.

But stores, which have to pay rent no matter how busy or slow, are always looking to inject some “magic” into the shopping experience. They just might not be relying solely on Kris Kringle to do the heavy lifting.

Instead, they’ll be looking to social media, ship-to-store options and, of course, promotional pricing. And when they’re in the store, it’s more important than ever to seamlessly close the sale.

Retailers can take heart in looking back on last year, when U.S. retail sales grew 5.1 percent over 2017, according to Mastercard SpendingPulse, and shoppers dropped a record $850 billion. Of course, e-commerce was a big part of that, as Mastercard also reported digital shopping sales increased 19 percent from the previous year. Stores benefitted from Christmas falling on a Tuesday, which gave shoppers the weekend plus Christmas Eve to fulfill their wish lists.

This year, due to a quirk in the calendar, the shopping season is six days shorter than last year. That means stores will have to be especially on point.

Cyber Monday Stands Out as Winner of DTC Holiday Sales

Nearly three-fourths of shoppers (71 percent) plan to buy gifts in-store this year, according to the Cotton Incorporated Lifestyle MonitorTM Survey. Two-thirds of shoppers say they prefer to shop in-store because of the overall experience, such as decorations, music, people, etc. 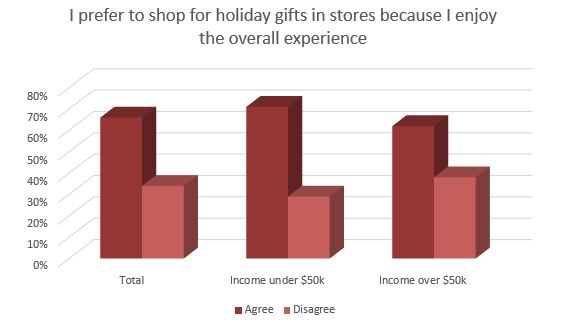 Consumers expect their biggest shopping day will be Black Friday (43 percent), followed by the week leading up to Thanksgiving Day (26 percent) and Small Business Saturday (19 percent). Another 13 percent plan to be out on Christmas Eve, while 12 percent say they’ll move from eating pumpkin pie to hitting the stores right on Thanksgiving Day.

In a report, McKinsey & Company says malls and their retail tenants have an advantage over digital retailers on Black Friday, as consumers “still associate the day with brick-and-mortar companies and are less likely to default to Amazon. To take advantage of this and gain a bigger share of the day’s wallet, retailers should aggressively promote same-day click-and-collect as a competitive advantage and feature big deals on the most popular and relevant items.”

With the shortened selling season, Walmart rolled out its holiday sales earlier than ever—nearly a week before Halloween. It’s also offering personalized gift recommendations. Target will spend an additional $50 million to increase employee hours and training. The store says it will increase staff during peak weekend hours, as well as double the number of employees who will be fulfilling online orders in-store.

The majority of gift givers (59 percent) plan to take advantage of ship-to-store options this holiday season, according to MonitorTM research. Additionally, more than two-fifths (45 percent) admit they will be taking advantage of late-night store hours in the last few days leading up to the holidays. Those under 35 years old (54 percent) are significantly more likely than their older counterparts (39 percent) to say they’ll be shopping in the wee hours.

Analysts say the buy online/pick up in-store (BOPIS) option is convenient for consumers and it can also drive additional in-store or in-mall sales.

Coresight Research says buy online/pick up in mall (BOPIM) has been trialed or adopted by a number of global mall owners, who see it as both driving traffic and providing a cross-selling opportunity for tenants. The firm points out that mall owners can operate BOPIM themselves or partner with third-party fulfillment companies.

McKinsey & Company points out that click-and-collect was a game-changer for brick and mortar last year, especially right before Christmas.

“Even though Amazon promised last-minute Christmas shipping—for orders placed by Dec. 22—the company’s traffic and conversion rates actually dropped compared to its normal baseline (down 9 and 18 percent, respectively) during the three days leading up to Christmas,” the firm stated.

“Consumers looked instead to brick-and-mortar retailers, either for in-store shopping or for the increasingly popular option of buying items online and picking them up in the store,” McKinsey added. “Retailers that offered click-and-collect through Christmas Eve (Best Buy, Target, Walmart, Macy’s, and Kohl’s) saw additional online traffic and higher conversion rates (an average increase of 52 percent).”

Digital can also drive consumers in-store through social media marketing. Big Commerce, a software provider and e-commerce platform, suggests app-exclusive offers, events and promos that prompt both user engagement and conversions. It says visual platforms like Instagram and Snapchat are especially effective in advertising great holiday deals. Malls and stores can take advantage to spark mobile sales or give shoppers a reason to come in-store.

Finally, Vend HQ, a point-of-sale software company, says if stores have reached the goal line by having consumers in-store and holding items for purchase, it’s imperative they don’t lose the touchdown with a poor checkout experience.

“If you’re dealing with lengthy queues, take immediate action to speed things up,” the firm says. Stores must, of course, be ready with enough staff to serve shoppers, but they should also be poised to open more registers. Additionally, Vend HQ says, retailers can use an iPad as an instant register. The firm also points to self-checkout scanning apps like the one offered by Sam’s Club, which allows customers to use their own phones to scan product barcodes and pay for purchases.

ShopperTrak says malls and retailers can leverage foot traffic insights throughout the holiday season, so they can capitalize not only on the busiest shopping days, but also “power hours” and less busy times when they can restock, update displays and manage fulfillment options.

“It’s clear that the physical store is still a key to holiday success for retailers,” says Bjoern Petersen, president at Sensormatic Solutions, ShopperTrak’s umbrella company. “With the top shopping days making up 45 percent of retailers’ holiday sales in the U.S., it is more important than ever for retailers to prioritize in-store customer engagement as an effective way to drive sales, customer retention and brand sentiment.”