Remember early on in the pandemic? Yes, it might feel like half a dozen or so years ago. But in March of 2020, brick-and-mortar stores were hammered when they were forced to shut down. Then, when consumers started shopping online in record levels, the concern turned to whether or not people would want to return to in-store shopping. After years of hearing about the “retail apocalypse,” it appeared it could actually be happening. However, in-store retail did not, in fact, die. Rather, merchants seemingly saw the immense challenge and said, “We got this.”

Eric Mogil, chief growth officer at Radar, a leading geofencing company, was part of a recent Retail Innovation Week (RIW) panel discussion on in-store technology innovation, where he said it’s clear the industry is in a transformational period.

“But physical retail isn’t going anywhere,” Mogil asserted. “One, it’s great for customer acquisition. Two, there’s a lot of showrooming happening. People, especially in fashion, accessories and beauty, want to try, smell and test the products. Another point is, Amazon has 110 distribution centers around the country that are state of art. Most retailers won’t have nearly close to that. But Target has 2000 stores and for that last mile competing with Amazon on ecommerce, they do a lot of ship-from-store because it’s 40 percent cheaper. And it’s 90 percent cheaper if people do curbside pickup. So their store networks are really becoming this distribution network for them, to get products to their ecommerce customer faster.”

What New CEO Brings to Under Armour's Future

Despite the ongoing pandemic, consumers are becoming more comfortable shopping in-store. For example, 72 percent of consumers purchased clothing in a physical store in the last month, according to Cotton Incorporated’s 2021 Coronavirus Response Consumer Survey, Wave 9, December 8, 2021. That’s roughly the same as the 71 percent who purchased apparel online. 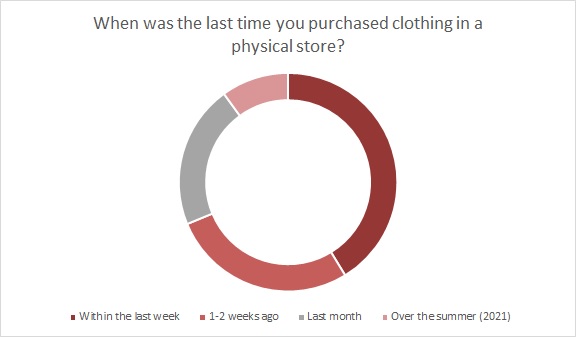 Further, 54 percent of consumers expect to shop in a physical store more in the next few months, according to the Coronavirus Response Survey (Wave 9). And 40 percent say they will have a stronger preference for clothes shopping in a physical store now than before the pandemic.

FlagshipRTL, a retail services platform, uses real-time data to pair fashion and lifestyle brands with commercial real estate landlords and brokers for pop-up or flexible short-term leases. Its clients have included Proenza Schouler, Bogner, Moncler, and Bonpoint. The short leases allow brands to test out a space without the risks associated with traditional, multi-year leases.

“We can rewrite the rules of retail by looking at the data,” says FlagshipRTL’s Justin Abrams, CEO. “In-store shopping is not only here to stay, but it is integral for digital success, too.”

Perch’s Trevor Sumner, CEO, who also took part in the same RIW panel discussion on in-store tech, said he thinks “it’s amazing” that it’s 2022 and people keep discussing whether physical retail is “maybe dead.” He pointed out that brick-and-mortar stores are where 85 percent of transactions still occur.

“Also, [in-store shopping] has 37 percent more impact on loyalty,” Sumner said. “So I think 2022 is going to be the year where people start really talking in a more aggressive tone about stores actually being the key to building brand and loyalty, and that ecommerce is transactional.”

When it comes to deciding whether to shop for clothes online or in a brick-and-mortar location, the Coronavirus Response Survey (Wave 9) saw consumers saying the following factors are extremely important: price (57 percent), clothing selection- availability of styles and sizes (56 percent), health and safety/COVID concerns (55 percent), convenience (53 percent), customer service (52 percent), time to receive clothing (50 percent), having a fun/enjoyable experience (50 percent), return policy/ease of returns (49 percent), ability to try on clothes (48 percent), and how much time they have to shop (47 percent).

PSFK’s Catherine Boardman, research strategist, who gave an RIW virtual store tour of New York area stores, said retailers are employing a number of actions to give consumers new store experiences as well as inspiration. Innovations like augmented- and virtual reality bring to life both the stories behind the brands as well as the products in fully immersive ways. Stores are also installing in-store personalization stations and kiosks that offer shoppers the opportunity to create their own products. Some merchants are adding community gathering spaces to their stores, whether it’s to work, grab a coffee or take in a community event. Brands are also using their stores to showcase their mission through interactive experiences and informational displays.

Says FlagshipRTL’s Abrams, “Brick-and-mortar retail, if modernized, is set for a tremendous rebirth.”