Ask the person nearest you why they buy things on Amazon and they’re likely to say, “It’s easy and I get free shipping.” Ask people why they like fashion, and you may hear, “It’s fun, it expresses who I am, it makes me feel good.”

While every designer and store hopes they’re the one meeting these consumer ideals, Amazon patiently gathers data on what consumers are really responding to and buying. And then they’re releasing their own private label apparel to match.

The dark fear is that the e-commerce goliath will take over fashion, with everyone wearing Amazon brands they buy from Amazon.com. Experts say that may never come to pass, but there are ways to combat that just the same.

“Is retail dead? No. But I think what is dead is traditional retail,” said Lucky Brand’s Carlos Alberini, CEO, at the recent Custora Carma conference in New York. “And those companies that continue to operate the way they did don’t have a chance. Putting the customer at the center is really the only way to win.”

Alberini explained how the company worked with Custora to collect and analyze customer data to improve retention, predict future customer behavior, and increase its expected revenue from $55 million to $170 million in the next year.

The fashion game is faster and more competitive than ever. And divergent consumer preferences makes it clear why brands are consulting with data scientists to keep up. Consider that 63 percent of consumers think shopping for clothes in-store is a fun, social activity, according to the Cotton Incorporated Lifestyle Monitor™ Survey. Yet more than half (57 percent) wish clothes shopping either online or in-store was as easy as streaming TV or movies on Netflix, “where I can get whatever I want, whenever I want it.” 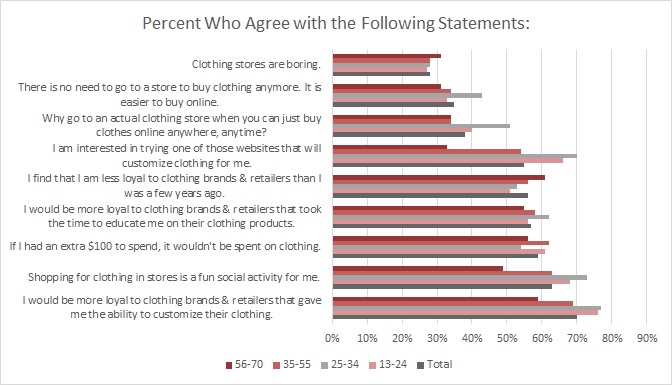 Cooper Smith, research director for Gartner for Marketers, formerly L2, says that while Amazon surpassed Macy’s this year as the largest seller of clothing in the U.S., they did it by selling a lot of basics, like socks, underwear and workwear. Amazon’s private labels are meant to tackle middle market fashion but, he said, private label has historically meant, “giving customers a choice that’s just good enough at a low price.”

“From my perspective as an analyst, they have not been successful in gaining traction in the higher end market of fashion,” Smith said.

Amazon currently has 120 private label brands, 80 percent of which cover fashion or apparel. Smith said these private labels are Amazon’s answer to the refusal of better brands like Michael Kors and Tory Burch to distribute their clothes directly on Amazon.com. Product from such designers’ can be found on the site, but it’s through third-party distributors.

“Obviously the luxury brands don’t sell on Amazon, but the middle market fashion brands don’t, either,” Smith said. “Amazon is saying, ‘The reason consumers aren’t buying apparel on our website is we don’t have the assortment.’ Rather than waiting for those brands to come and sell that type of product, Amazon says, ‘We’re going to manufacture and sell it ourselves.’ They’ve basically filled that white space in assortment with their own private label.

“Some of them are gaining traction and some are just dead in the water,” Smith said. “I think part of the reason they’re casting such a wide net in terms of launching so many private label brands in so many categories is because they really don’t know what’s going to work.”

Besides the Amazon site, the company can collect consumer data from its Echo family of smart speaker products.

Roughly half of all consumers (48 percent) own a device with a digital voice assistant, according to Monitor™ research. Just over one-third (34 percent) have used it to order products. As we head toward the holidays, new research from Adobe shows that while only 23 percent of non-owners expect to purchase a smart speaker for themselves in the coming season, 45 percent of current owners are looking to get another. And 23 percent are planning to buy an Echo or Google Home for someone else.

Amazon’s Echo Look device is like a camera with Alexa built into it. It has a Style Check feature that compares users’ different outfits. It can also recommend new pieces, which would be the perfect time for Amazon to promote its own private labels.

“They’re trying to solve the ‘try before you buy problem,” Smith says. “These are the shiny new things in retail—artificial intelligence, augmented reality, and virtual reality. And you have a lot of experimentation going on by brands and retailers. But from a consumer perspective, we don’t see any material shift in how consumers are purchasing.”

Even though consumers are very digitally savvy, they’re still more apt to buy apparel in an actual store (72 percent), according to Monitor™ research. They also like to go in-store if they have any questions before purchasing clothes (66 percent), as well as to follow-up with post-purchase questions (55 percent).

So if consumers are still more comfortable clothes shopping in stores, perhaps shoppers can expect Amazon to open up its own apparel locations, featuring Amazon private labels. On the other hand, they might just buy an already existing chain.

“We’ve seen them do it already with groceries,” Smith said, referring to Amazon’s purchase of Whole Foods. “Amazon Fresh launched 11 years ago, yet e-commerce still represents less than 5 percent of total grocery sales. Amazon could not convince consumers to buy groceries online so they got into brick and mortar. They might do the same thing when it comes to higher end and luxury fashion.”

“We know that customers that show up both online and in-store are more valuable,” he said. “We know stores are driving acquisition much more than the e-commerce. Direct mail used to be a tool to generate sales, and now it’s moving customers from their desk top or mobile into stores. And that’s the best thing. Because we know when we have customers in store, we have our people who can really create a rich experience and a bigger engagement with the company and brand. Stores are a key part of the customer experience.”