International e-commerce grew in 2018, “which was a positive factor for the year,” IATA said, “yet, there was a softening of several key demand drivers.”

IATA was somewhat optimistic that demand would grow in the range of 3.7 percent this year, however, de Juniac said, “with the persistence of trade tensions and protectionist actions by some governments, there is significant downside risk.”

“Keeping borders open to people and to trade is critical,” de Juniac said. “To attract demand in new market segments, the air cargo industry must improve its value proposition. Enabling modern processes with digitalization will help build a stronger foothold in e-commerce and the transport of time- and temperature-sensitive goods such as pharmaceuticals and perishables.”

Airlines in all regions with the exception of Africa reported an annual increase in demand in 2018.

Asia-Pacific carriers posted the weakest growth of any region in December, with a decrease in demand of 4.5 percent compared to the same period a year earlier. This contributed to growth in freight demand of just 1.7 percent in 2018 compared to 2017.

IATA said the the weaker performance of Asia-Pacific carriers indicates a slowing in demand for exports from the region’s major exporters–China, Japan and South Korea.

“Signs of a moderation in economic activity in China and an escalation of trade tensions continue to pose a downside risk to air cargo in Asia-Pacific,” IATA said.

North American airlines saw the fastest growth of any region for the seventh consecutive month in December, with an increase in demand of 2.9 percent compared to a year earlier. This contributed to an annual growth in demand in 2018 of 6.8 percent.

“The strength of the US economy and consumer spending have helped support the demand for air cargo over the past year, benefiting U.S. carriers,” the monthly report said.

Freight demand rose 1.9 percent for European airlines in December, which helped lift the annual growth to 3.2 percent. IATA said weaker manufacturing conditions for exporters, particularly in Germany, impacted demand for the region in 2018.

Middle Eastern carriers’ freight volumes increased 0.1 percent year-on-year in December and 3.9 percent for the year, although IATA said the region continues to be affected by geopolitical issues.

Latin American airlines posted a decline in year-on-year demand of 0.1 percent in December after three months of positive growth. 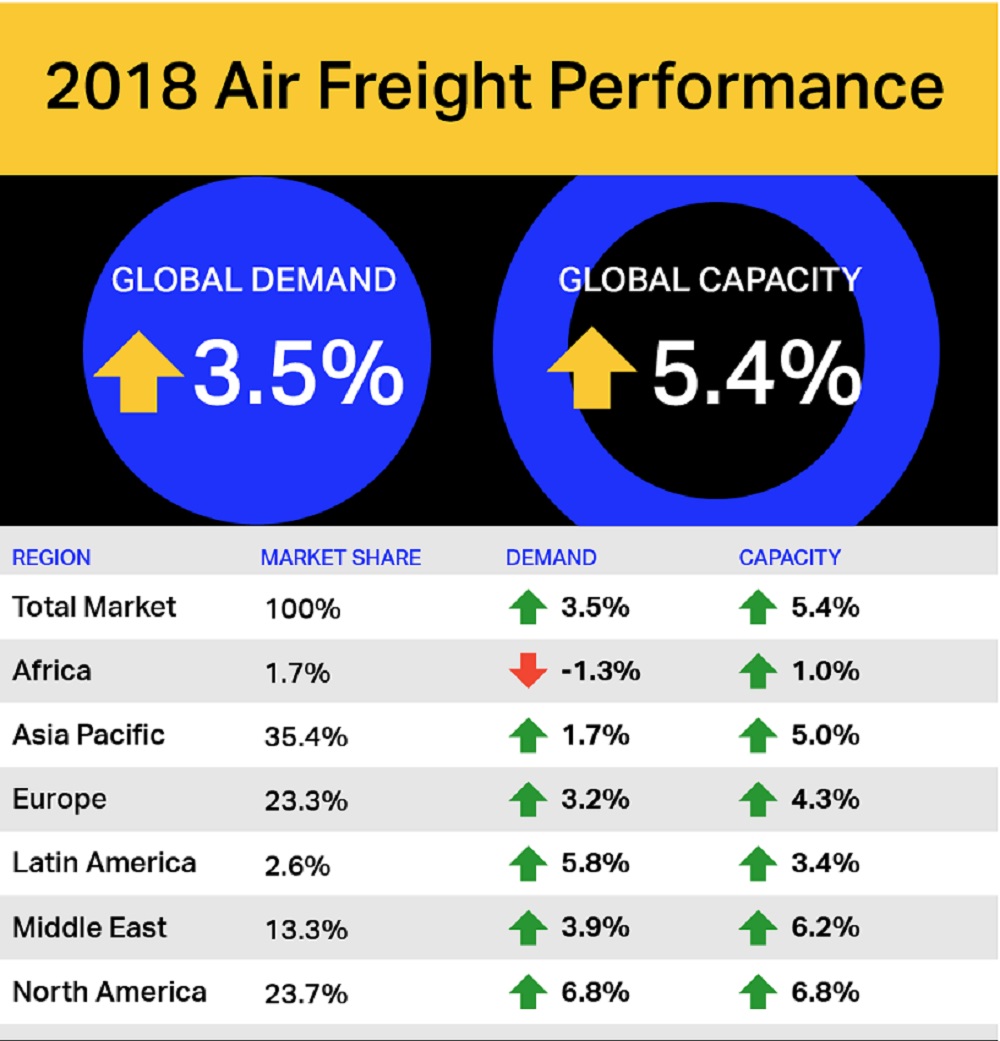